Ask The Judge | Too Early

Questions about Dressage
With Amy McElroy

Amy McElroy is an FEI competitor and a USEF R judge, qualified to officiate at any USEF recognized show at all national dressage levels. She rides, trains and teaches at Fairlane Farm in Aiken and judges between 15 and 20 dressage shows and events each year. In her popular Ask the Judge column, she answers readers’ questions about dressage. 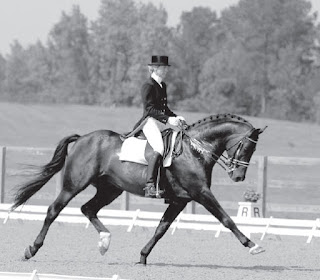 I recently rode a dressage test in the Novice Horse division of an event. I was scheduled to be the first rider after a break, at 2:40. Because of the excessive heat, I arrived at the warm-up at 2:20, just 20 minutes in advance, thinking that I had allotted enough time for warm-up.

I was very surprised when I got to the warm-up arena that the warmup ring steward informed me that the judge was ready for my test. So I went in to do my test at 2:25 without a warm-up, since I didn’t want to disrespect my judge. Needless to say, I was not warmed up enough, and I did not have a good ride. If this situation occurs again, what can I do? Do I have to go in early just because the judge decided not to take her break? Should I have told the judge what happened so that she would know why my horse was not properly warmed up?

It certainly sounds as if you had your warm-up well planned. What an unfortunate turn of events for you! Most important, let’s review your rights as a competitor at an event.

When you are assigned a ride time, you do not need to perform before your reserved time. That is always your right, with no penalty, unless the management has decided that they need to change your time for some unforeseen reason – a storm moving in, for instance. If there is a change in ride times, the management is required to give competitors at least 30 minutes warning before the new assigned time. This would be an official decision made by the ground jury, not by the warm-up steward.

So if you get to the warm-up with a planned warm-up routine, it is clearly your right to hold to your assigned time. Please feel positive about doing this. Keep in mind that your warm-up arena steward may be very knowledgeable at his job, or he may be a newcomer. He may or may not be aware of all the current rules. Stewards are our wonderful volunteers that are there to help keep things running smoothly. Show managers and competitors appreciate them and could not do without them. However, they are not officials of the show, nor are they responsible for your ride time. Only you are.

You might be surprised to learn that your judge may or may not know what is going on in the warm up or with the warm up arena steward. More often than not, the judge has no way of communicating with the steward. Sometimes, the judge does not even know who the warm-up arena steward is! So bear in mind that if a steward tells you that you need to go in early, he would not be speaking for the judge – the judge would not and could not tell you that: the judge knows that she doesn’t have the authority to do so. However, the judge might be ready and willing to evaluate your ride ahead of its scheduled time. In this case, the decision to go in early would still be yours and yours alone.

Judges work very hard to keep their arenas from running behind. Most judges take a lot of pride in sticking to the published ride times, and this is not always an easy task. We understand how important your warm-up time is and we know it can be as detrimental to your ride to have too much time in the warm-up (if the judge falls behind schedule) as to have too little time (if you go in ahead of schedule.)

It sometimes happens, especially in inclement weather, that the judge might shorten her break and tell the steward that the riders may come in early if they so desire, as long as they stay in the same order of go. Most likely, the judge would be offering the riders this opportunity to benefit them. If you are the first one to go after a break, you have the opportunity to take advantage of this earlier ride time if that is what you want to do. But staying to your published time would not affect the way your judge would score your ride, not would it convey any disrespect.

If there is a problem or a concern during your show, it is advisable to contact the show’s technical delegate (TD) who is a hired official for the show and is there to ensure that the show abides by all the rules of the competition. The TD knows these rules and can advise and mediate between competitors, management and judges. If the TD cannot solve your problem, and you would like to talk to your judge, consult the TD during show hours before the show has ended. He will either bring your concern to the judge, or arrange for the two of you to meet.

In your case, I feel certain that your judge had no idea that you sacrificed your warm up to come in early. In the Novice Horse division, your judge would probably have attributed small problems in your test to the fact that your horse is young and/or inexperienced, rather than that he was insufficiently warmed up. In the future, you should always do what is best for you and your horse, which is what the judge wants as well. Judges want to see you succeed and have a good ride. Good luck in your next competition!

This article is copyrighted and first appeared in The Aiken Horse. It is reprinted here by permission.
Posted by Three Runs Plantation at Friday, October 30, 2015

Michel Vaillancourt at the Pan Am Games
by Pam Gleason 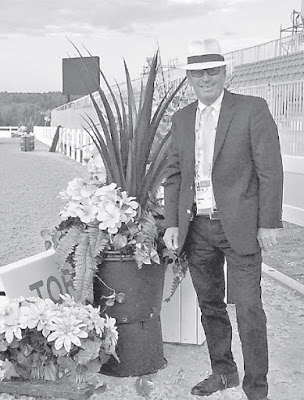 When the Pan Am games came to Toronto, Canada this July, the City of Aiken was well represented. There were several horses and riders competing there who train, or have trained in Aiken, including Boyd Martin and Phillip Dutton who rode for America in eventing, as well as Emanuel Andrade, who was on the Venezuelan showjumping team. But the perhaps the most significant Aiken influence came from Michel Vaillancourt, who was hired to design the jumps and the courses for showjumping.

Michel, who lives in Aiken, is a native of Montreal and the winner of the individual silver medal in showjumping at the 1976 Olympics. One of just a handful of FEI level 4 course designers in North America, his services have been in demand all over the North American continent and in Europe. He was chosen to set the courses for the 2015 Pan Am Games three years ago, not long after they were awarded to Canada, and he says he got started working on them right away.

“It was a long process,” he says. “As soon as I got the nomination, I started doing sketches of the jumps. In the end I submitted 45 sketches of different jumps. For a competition like this, we try to make the jumps represent the country that we are in. So I made some jumps to represent landmarks, and some to represent the culture of the area. I had one of the CN tower in Toronto, and a jump that looked like a hockey stick. I had maple leaves, of course, and the mounted police, things that are iconic of Canada. For instance, one jump was a sugar shack – you don’t see sugar shacks in a lot of other places.”

Michel then submitted the designs to the organizers and they went through various committees. One of these was a committee in charge of protecting the Pan Am brand, which, he says “had a lot to say about what they wanted and what they did not want.” Some of his favorite designs did not make the cut, including several that represented the First Nations. “I was disappointed about that.” 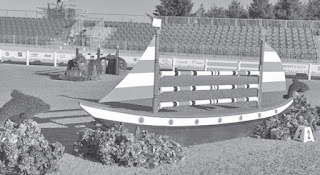 Once a list of approved jumps was established, the organizers of the games began an open bidding process for the their construction. The winner was a German firm.

“They did a super job,” Michel says. “They took my vision and they turned it into reality with the finest detail. I was ecstatic when I saw the jumps.”

Michel started designing the courses themselves this spring. He had to create tracks for three different competitions: the first qualifier, the team and the individual jumping.

Although Michel has been involved with the design of international courses, including those at the World Equestrian Games, this was the first major championship where he was in charge of the entire process. He admits he was nervous.

“Times have changed and the course had to reflect that,” he says. “The team competition had to be tough enough that the top country could come through, but the lesser teams would be weeded out. I really believed that the course was going to do the right job, and I got quite nervous after the first round because Canada did not do well. They needed to do well in order to qualify for the 2016 Olympics in Rio. I didn’t want to be the one responsible for disqualifying them.”

Fortunately, the Canadian team stepped up its efforts in the next round, eventually coming away with team gold, thus securing a berth at the Olympics. Argentina won the silver medal, its first medal in international competition since 1971, qualifying that country for the games. The U.S., which was already qualified on the basis of its performance at the 2014 World Equestrian Games in France, landed in bronze medal position.

McLain Ward, who is on the American team, rode Rothchild to the individual gold. “He really deserved it,” says Michel. “He was the only one in the competition to have a double clear round.

“I congratulate all the medal winners,” he continues. “It was a fantastic competition and the sport was really good. That is always my goal when I design a course, to provide good safe sport, and I was very pleased with the outcome of the championship. I was also overwhelmed by the support and the positive feedback I got after the event. . . .To have such a beautiful competition – it could not have been any better.” He gives a little laugh.

“I almost feel that I should retire. I’ll never be able to do as well as I did there.”

This article is copyrighted and first appeared in The Aiken Horse. It is reprinted here by permission.
Posted by Three Runs Plantation at Friday, October 23, 2015