Could you explain to me what a half turn on the haunches should look like? I am competing at Second Level, but my scores on this movement are significantly lower than my scores on other movements in the test. How can I do better?

The turn on the haunches is a difficult movement that is important to perform correctly because it is seen up to the Prix St. Georges level. The movement is performed at the walk and can be used to make a change of direction. When it is properly executed, the horse does not stop, rather his hind legs march in place while his front legs walk around them, swinging in a smooth arc. The movement is a stepping-stone to the walk pirouette, which is seen at the higher levels.

Let’s examine the movement itself, with this description adapted from the United States Dressage Federation “L” program handout.

Purpose: To improve the horse’s obedience to the aids and to improve balance and collection.

Execution: The horse’s forehand moves evenly, quietly and with regular steps around the horse’s inner hind leg, while maintaining the rhythm of the walk. The horse is slightly bent in the direction in which he is turning. In the half turn on the haunches, the horse is not required to replace his inside hind leg in exactly the same spot with each step, but may move slightly forward.

Essence: To maintain the walk and maintain obedience to the aids.

You are not alone in having trouble with this movement. I often see a variety of errors and mistakes.


Here are some common problems:

0: Not performed. The movement is not recognizable; the horse is never walking. The horse is seriously disobedient or displays severe behavior issues.

1: Very bad. Small fragments of the movement are recognizable, but there are major problems or disobediences.

2: Bad. Irregular steps. Totally “stuck” behind. Not accepting the bit at all. Hardly any energy or desire to move. Completely incorrect bend. Severe resistance or disobedience.

3: Fairly bad. Very inaccurate. Stuck for several steps. The walk becomes irregular. The horse is way above or behind the bit. Severe resistance, lacks willingness to turn.


5. Marginal. Slightly inaccurate placement. Too big in size. Some loss of rhythm, tension or loss of connection to the bit. Lacks energy or bend. There might be a small resistance.


The half turn on the haunches is a great exercise to help horses prepare for collected work. As you advance, it becomes the walk pirouette, and the movement is also performed at the canter in the canter pirouette. It is a difficult movement, but it is one worth working on. When you can perform it correctly, you should feel a great sense of accomplishment, and you will know you are on the way to success in your dressage.

A Letter from the Editor 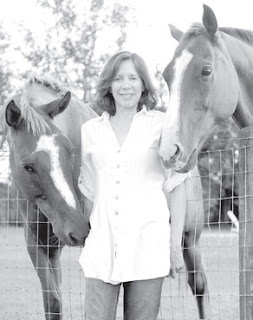 When horse people come to Aiken for the first time, most of them are struck by how visible the equestrian life is here. It starts with the life-sized painted horse statues downtown, the street signs with horses’ heads painted on them and the crosswalks with their “pushto- cross” buttons positioned at rider height. Then there are the people downtown still in their riding clothes, the horse trailers on the streets, the stables in the historic district and the horse farms that line the roads all around the city. Aiken is obviously a horse friendly place, and a place with a vibrant and diverse equestrian culture.
Today’s Aiken horse world is thriving. We have so many different disciplines here, from foxhunting and eventing to polo and combined driving, dressage, trail riding, western sports, and everything in between. But what you see today is only the tip of the iceberg; Aiken’s equestrian life also has a long and rich history. You can get a glimpse of this in the downtown historic district, where you can stroll (or ride) down the clay roads past the historic Aiken Training Track and venerable Whitney polo field. You can immerse yourself in this history at the Aiken Thoroughbred Hall of Fame and Museum in Hopeland Gardens, or look through the scrapbooks at the Aiken County Historical Museum. You can ride through the Hitchcock Woods, where the names on the trails and on Memorial Gate recall horsemen who are lost but not forgotten: Pete Bostwick, Francis Hitchcock, Captain Gaylard, Lucetta Knox. Sometimes, when you ride in the Woods, you have the feeling you are riding with ghosts: gallop around the Ridge Mile Track and Thomas Hitchcock’s steeplechase horses from the 1920s might be galloping along with you.
Today, Aiken’s horse people are looking forward, trying to figure out the best way to help preserve and protect equestrian life, even as it is growing. Will we have a horse park? Can we improve the trail system in Aiken County? Will we continue to have enough open land for our foxhunters to enjoy their sport? But they are also looking backward, perhaps best exemplified by the restoration of the historic Gaston Livery Stable, which was such an important part of life in the old Winter Colony. Aiken’s horsemen don’t just want a new and improved equestrian culture. They also want to honor and preserve Aiken’s equestrian history.
At the Aiken Horse, our central mission is preserving stories, which is one reason why we bring you so many profiles of people who are important in the local horse culture today – after all, they will be tomorrow’s history. We have also always striven to include historical pieces in the paper, to pay tribute to and perpetuate the stories of horsemen who have gone before us. Generally, these stories have been focused on the first three decades of the 20th century, which was the golden age of Aiken’s Winter Colony. Many of the people we have talked about are already well known to anyone who is a student of Aiken history – William Collins Whitney, Louise and Thomas Hitchcock, for instance.
But Aiken’s equestrian history did not stop at World War II. From the 1940s until the present time, many more outstanding horsemen have made Aiken what it is today. Many of the stories of these people, while preserved in the memories of longtime Aiken residents who knew them, have never been recorded, or are not accessible to the general public. Since we think these stories are important, we decided to start a new series called Remembering Aiken’s Horsemen. Although we will probably profile some prominent people from before World War II, our focus in this series will be on the horsemen of the 50s through the 80s, people whose stories might otherwise disappear. For the first installment, we chose the legendary William Haggard, known to his friends as Billy, a sportsman and patron of equestrian sports who moved to Aiken in 1973.
As ever, we have a full issue for you, starting with our annual Aiken Hunt Directory and ending with our indispensible Calendar of Events. In between, you will find news, profiles, and all sorts of information. If you have an idea for a story, or you know something we should know, please drop us an e-mail. We want to be your horse newspaper.

This article is copyrighted and first appeared in The Aiken Horse. It is reprinted here by permission.
Posted by Three Runs Plantation at Friday, December 14, 2012