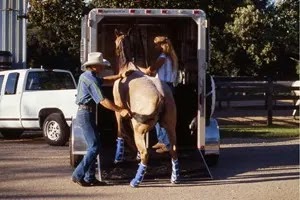 Previously, much of the data on equine travel risks was gathered using horses bound to slaughter facilities, which the researchers say is not applicable to horses transported for other reasons.

“You cannot transfer the findings from papers on the transport of slaughter horses to the transportation of sport horses because the vehicles are completely different,” explains Barbara Padalino, DVM, who conducted the study as part of her doctoral work under the supervision of Gary Muscatello, BVSc, PhD, at the University of Sydney. “Slaughter-bound horses usually don’t travel in single stalls. They are transported in higher density, and often these horses are not tamed and have no travel experience.”

To gather data more reflective of sport and pleasure horses, Padalino and fellow researchers reviewed the records of a commercial transportation company that regularly moves horses between the east and west coasts of Australia. Information was provided on all 1,650 horses the company transported along the same route from April 2013 to April 2015.

“The trip consisted of four stages,” says Padalino. “Sydney to Melbourne [10 hours], Melbourne to Adelaide [eight and a half hours], Adelaide to Kalgoorlie [24 hours] and Kalgoorlie to Perth [six hours]. After each stage, horses were given a 12-hour rest period. The total duration of travel was approximately 85 hours with approximately 49 hours in transit and 36 hours for rest stops.”

At the collection stable and rest points, horses were individually housed in walk-out rubber-lined stables and/or paddocks that were used only for horses in transit. Padalino adds that the transportation company was well-respected and well-run, following guidelines provided by the Australian code of livestock transportation.

The data showed that 97.2 percent of the horses arrived at their destination with no signs of disease or injury. Among the few horses who did have problems, the most common were respiratory illness (27 percent), gastrointestinal issues (27 percent), fever (19 percent) and injuries (15 percent). There were four transportation-related deaths, making the overall death rate .24 percent.

Horses were more likely to hurt themselves in the early hours of the trip. “Injuries are often associated with misbehaviors, such as refusing to load or kicking in the truck,” says Padalino. “It’s been reported that the first hour of a journey is always the most stressful for horses. During that time horses tend to move more, try to escape more and lose their balance more.”

In addition, the researchers found that horses transported in the spring were more likely to develop gastrointestinal or respiratory problems. This, they say, may reflect higher temperatures at a time when many horses still have winter coats, or challenges posed to their immune systems by hormonal fluctuations or increases in pollen or other allergens associated with the season.

Padalino says this low illness and injury rate is encouraging. “This percentage is actually really good, considering that we examined one of the longest journeys which horses can do worldwide in a very hot country. This figure tells us that safe transportation of horses is possible when done by experienced people.”

For trips of more than 20 hours, she recommends using a reputable shipping company, inspecting the transport vehicle and having a full veterinary exam performed ahead of time to identify any subclinical illnesses that the stress of transportation may exacerbate.