Faye Woolf, sponsor of Silva and Boyd Martin, on how to make a successful syndication

Often when a rider syndicates a horse, they are offering an upper level competitor with the hope of taking the horse to the next level. In the case of the Rosa Cha W Syndicate, Silva Martin imported her homebred mare Rosa Cha W from Australia and rallied a group of supporters when the mare was just starting out at training level. Silva is an accomplished rider and some of the original syndicate members, like Faye Woolf, already owned horses for Silva and a) believed in her as a rider, b) trusted her judgment where this young prospect was concerned and c) wanted to support her competitive endeavors. 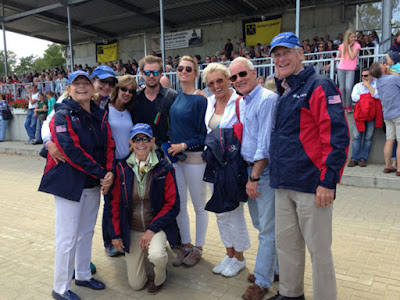 Fast forward to 2014 and Silva and Rosa Cha W represented the United States at the Adequan Still Point Farm Nations Cup, where they helped bring home the team gold medal. When they performed their Freestyle on Friday night of the competition and earned fourth place individually in that class, several syndicate members were there cheering her on.

Faye, who owns Ying Yang Yo, the horse that brought Boyd to America for his first Rolex Kentucky Three-Day Event, recalls when Silva first reached out to her. “Silva approached me and I felt like she was an enormous talent and she deserved the help,” says Faye. “I was thrilled to be part of it. Boyd was already well-known but not so much Silva at that point and I wanted to help her make a go of it here in the United States.”

Faye used to have more time to the farm visit often and see the horses in training. Silva also rode her horse Aesthete to wins at Dressage at Devon before he was sidelined with an injury. When Stately was competing, Faye had a double reason to travel to shows; in the past year or so she has been busy with business start-ups and hasn’t had as much time to spend with the horses, but she remains strongly involved by phone and email.

“Silva doesn’t skip anything, she takes her time and lays such a solid foundation for a young horse, and seeing Rosa from 5-years-old the slow layering of her fundamentals and her progression – which I really saw when I was able to go to the shows more – is so fantastic,” Faye says. “She has really taken her time and let Rosa mature physically as well as mentally, and that’s a hard thing to do.”

Everybody chooses to own horses for their own personal reasons. Faye says, “My motivation has always been to support somebody that I feel deserves the chance, who has a great work ethic, and a great person just needs a leg up, so to speak. Becky [Holder] is also that to me, I supported her for many years in eventing and still would today. The way Silva brings horses along, her beliefs are my beliefs. It’s also critical to have a good relationship with the horse, and Rosa is a delight to be around. I wouldn’t be part of a situation if I didn’t feel that way about the horse.”

She also points out that strong partnerships are more important than competitive success, in her case. “Having grown up in eventing and it being such a high-risk sport, I don’t know if it’s my nature or whatever, horses have always been my outlet. In business you have to be competitive and in horses I don’t feel that way, maybe because in eventing you just want everyone to come home safe and sound! But my motivation isn’t competitive success; Silva is so incredibly deserving of the support because of everything she personifies, that is important to me: her work ethic, her patience, her inclusiveness. She is great to all of us and she really takes the time to make us feel part of this. She is always so gracious in her gratefulness to all of us syndicate members for helping her achieve this, and the huge bonus is her immense talent. For me, on top of all these great qualities she has as a human being and a trainer, she’s incredibly talented.”

Having owned horses as an individual and as part of a syndicate, Faye believes that syndication is the way forward for riders looking to succeed internationally. “In today’s time it’s so expensive to be a sole owner, and through syndication so many more people can be owners,” she points out. “I think it will allow the United States to have a deeper bench and it allows people to be part of this that otherwise would feel like they couldn’t be part of it, for whatever reason. We have the ability to field teams that are competitive and I think we’re on the upswing for that with what the dressage community is doing as a whole, defining goals and executing the tactics to reach those goals. More of us can be a part of that through syndication. We can bring more people into the structure we need, as a community, to reach those goals. That is what is so critical about the whole syndication structure.”

For riders looking to syndicate a horse the old saying, “It never hurts to ask” is 100 percent true. Faye encourages riders to just go for it. “You have to come to the realization that you may not like the answer, but you have to ask. If you’re not successful, dust yourself off and refine your message until you get a yes. Don’t be afraid!”