Ranch sorting is a competition that evolved from a common activity on ranches in the West: sorting cattle into pens for various purposes. A growing sport in the Aiken area, and now it can boast to all American quarter horse Congress Champion sorting horses as well as a reserve Champion. All three horses live at Three Runs plantation and are owned by Blair and Ted Cummings. Blair and Ted own and run Cummings Insurance Agency, a full service independent insurance company that offers automobile, home, life and equine insurance, among other things. They relocated to Aiken from Connecticut a few years ago, and that move also entailed a change of disciplines for them. 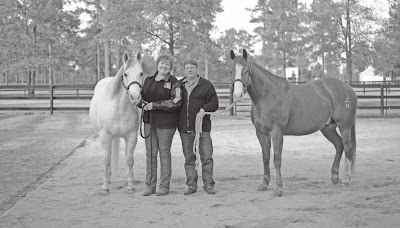 "Ted had done some raining and I was a western pleasure rider," says Blair. "But when we came to Aiken, everyone told us we should try ranch sorting, and so we did and we love it."

The Cummings ended up training with Marc Chancey, A performance horse trainer based in Waynesboro, Georgia. They became devoted to the sport, and, with Marc's help, soon acquired their own sorting horses. These include Teds horse Hallowed Be (Mick) and Blair's horse High Rollin Sug (Gambler), A nine-year-old gray gelding from High Brow Cat lines that Ted gave to Blair as a Christmas present last year. They also recently bought Scoot to Smoke (Grace), A mare that they hope to breed in the near future. Blair and Ted travel to Waynesboro regularly to practice and learn more about sorting and they compete monthly at the BSC arena in Waynesboro, where there are Ranch Sorting National Championship sanctioned events.

The all American quarter horse Congress, held each October in Columbus, Ohio, is the world's largest single breed horse show, attracting entrants from around the country and the world. In ranch sorting, teams of two riders enter an arena where there is a herd of numbered cattle and they must move these cattle, in numerical sequence, from one pen to the other as quickly as possible. At the Congress this year, Marc Chancey road Ted's horse Mick, while Janine Kassab from New Jersey rode Gambler. Marc and Janine topped their class to win the Congress championship. Janine also competed on grace, and was Reserve Champion. In November, Marc took Gambler to the world show in Oklahoma City. They did not win, but they did place well in a huge class. Blair says that the goal for next year is to get all three horses qualified for the World Show. In the meantime, she and Ted have the chance to enjoy their champions as riding horses and as companions.

"When we are sorting these our trail horses," she says. "They are phenomenal trail horses as well as performance horses."

The horses live at their home in Three Runs Plantation, and Blair and Ted ride regularly on the trails there or in the Hitchcock Woods. Ranch sorting horses have to be quick and nimble to cut out their cows, but Blair says that her horse gambler is as calm and quiet on the trails as anyone could want, whether she is riding alone or in company. He is such a kind and adaptable horse that, two weeks before the Congress, Blair lent him to a girl named Malley Flowers to compete in the Special Olympics Georgia State Horse Show in Gainesville, Georgia. Malley then went on to win gold medals and one silver in showmanship, horsemanship and trail.