How to Stop Your Horse From Swapping Leads

Learn some tips to keep your horse from swapping his canter leads. 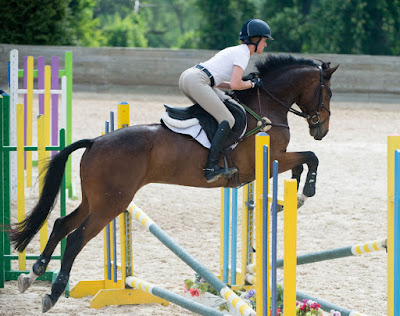 Q: I compete in the Adult Amateur hunter division with my 12-year-old Trakehner/Morgan-cross gelding. He places well consistently, but when he swaps his lead in the front it keeps us out of the top ribbons. The swap usually happens off the left lead on a long gallop to a single fence. He will swap leads in front only on the stride before takeoff. Also, when he comes around a turn into a line on the left lead, he will usually hold the lead over the first jump and land on his right lead down the line. He is sound and has regular chiropractic checkups and massages. Please help!

A: It’s perfectly normal for a horse to approach a jump on one lead and land on the opposite lead. However, swapping leads in front, or cross-cantering, is considered a fault in the hunter ring and judges will penalize it as such—some more heavily than others. It can happen for a variety of reasons. In general, when a horse cross-canters in the approach to a jump, he is probably trying to shift his weight away from some source of pain or weakness in his body in preparation for the takeoff. This is a moment that requires a great deal of power, both from the front and hind legs, so your horse may be swapping leads in an effort to transfer the physical burden onto a stronger or more reliable leg.

It sounds like you are diligent about his health and wellness, but it would be worth investigating possible medical sources of the problem a little further. Ask your veterinarian to examine him thoroughly to determine if he is hurting somewhere in his body or legs. The problem could be anything from hoof pain to a sore back, hock or sacroiliac joint.

Also check your saddle fit carefully. (If you don’t know how to do this, ask an experienced horseperson for help or consult an expert saddle fitter.) Is it sitting too low on your horse’s withers? Is it pinching his shoulders? Any discomfort could be contributing to this problem.

If you can’t find a physical cause for the cross-cantering, it might simply result from one-sidedness. Just like humans, many horses have a weak side and a strong side. Your horse may just prefer to take off over jumps from his strong side.

Once you’ve ruled out any source of discomfort, begin to correct the habit by focusing on straightness. In order to produce a good jumping effort, your horse must be straight in his body on takeoff, over the jump and on landing. His weaker side will grow stronger as he becomes straighter in his body, making him less prone to cross-canter.

In your schooling at home, place two ground poles perpendicular to a jump, one on the takeoff side and the other on the landing side. Roll them a few feet to the right of center, close enough to the track that they’ll get your horse’s attention but not so close that he risks stepping on them. This will help to keep him straight before and after the fence. (Note: If you try this exercise at a show, be sure the ground poles are placed at least 9 feet from the jump, per U.S. Equestrian Federation schooling rules.)

Another helpful exercise is to initiate a turn in the air, asking your horse to land on his weaker lead. In this case, ask him to turn left and land on his left lead. Take the exercise one step further by practicing making fairly small circles (about 30 meters in diameter) over the jump, so that he is continuously turning left. This will help to strengthen his weak lead and discourage the swap to his preferred lead.

Practicing over a Swedish oxer will force your horse to center himself in the middle of the jump and keep his body straight in the air. To build one, start with a square oxer set at your normal jumping height. Then lower one front rail jump cup by a few holes. Raise the other front rail jump cup by the same number of holes. Do the same with the back rail, only lowering and raising the opposite cups, so that it is higher on the side that is lower in the front and lower on the side that is higher in the front.

How you address this problem in the show ring depends on your ability level. If you are a novice rider, you may be tempted to pull on the left rein to prevent the lead swap. But this will just make your horse bulge his body to the right even more, creating a more likely cross-canter scenario. It may sound counterintuitive, but you need to pull on the right rein to straighten his body and maintain the lead. Think of your horse’s body as a curved banana, with his head and haunches positioned to the left of the rest of his body. To straighten him, you need to transform the banana into a pencil by pulling on your right rein. Meanwhile, keep your own body very centered over the middle of the saddle and close your outside leg (your right leg, in this case) slightly behind the girth to discourage his body from bulging to the right.

More advanced riders should use the same technique. In addition, they can ride the track strategically to discourage the swap. For example, if there is a left turn to a fence, you could overshoot the turn slightly and then aim to jump at a slight right-to-left angle. This will prevent your horse from shifting his weight in the approach and will thus help to hold the lead.

Hunter/jumper/equitation trainer Kim Williams began her career competing as an amateur owner. She won many top hunter and jumper awards in the U.S. and Europe, including the grand prix in Reims, France, in 1987. Her most successful partner was an Argentinean Thoroughbred named Whadyasay!, with whom she won multiple Amateur Owner Hunter grand championships at top horse shows in the 1980s. Kim turned professional in the early 1990s and founded her full-service show barn, Willow Wood. Now based on a 50-acre farm she leases from Dr. and Mrs. Richard Nessif in Woodbine, Maryland, she prepares adults, juniors, pony and equitation riders for local and rated competitions.

Kim and one of her students, Lindsay Smith, were featured in the 2006 Animal Planet series, “Horse Power: Road to the Maclay.” Kim has also guided her three daughters, Emily, Hannah and Ellie, to successful starts in the show ring.

This article originally appeared in the August 2015 issue of Practical Horseman.
Posted by Three Runs Plantation at Monday, November 21, 2016