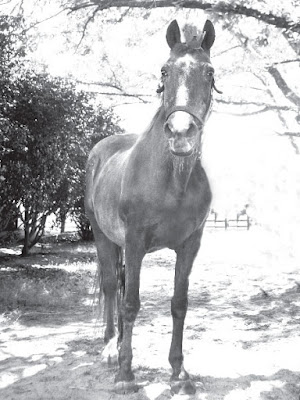 On Saturday, April 23, Lizotte’s Applelonia, a 14.3 hand Morgan mare known to her friends as Apple, celebrated her 30th birthday at a party thrown for her by her owner, Ellie Joos. There were apples, of course, and carrots and carrot cake in the shape of a horseshoe baked by Ellen Hawkins. There were party favors to take home, and a crowd of about a dozen human celebrants who gathered around a picnic table at Billy and Shirl Tronoski’s Chime Ridge Stables in Aiken, where Apple lives. Chit Chat, Apple’s Thoroughbred friend (and Ellie’s other horse) was on hand. Apple herself, dressed up in a party hat with pink ribbons in her mane, took part in all the festivities, clearly enjoying the attention. She had the air of knowing that she deserved it.

Apple came into Ellie’s life 22 years ago as an overweight 8 year- old who had recently had a foal. A lovely dark chestnut born and raised in Vermont, she was most notable for her kind disposition and her willing and eager character.

“My horse had bucked me off for the last time,” says Ellie, who lived in New Jersey at the time. “My boyfriend Bill –now my husband – said it was either the horse or him, so I found a new home for that horse with a more experienced rider and began the quest for my next horse.”

Bill happened to have a friend in the textile industry who knew Apple, and suggested that she would be the perfect match for Ellie because she was sweet and kind and would help restore her rider’s confidence. And so, sight unseen, Ellie bought Apple and had her shipped from Vermont down to the New Jersey stable where Ellie had boarded her last horse.

“As she exited the horse van, I thought ‘Oh no, what have I done?’ remembers Ellie. “Having had a baby the year before, she still looked pregnant, and she was sluggish from the trip. After a few days rest, my trainer, Cindy Canace – who was appalled that I brought this horse down from Vermont sight unseen – and I began to train her. Although she had been backed, she did not know how to steer very well and could barely pick up the left lead canter.” 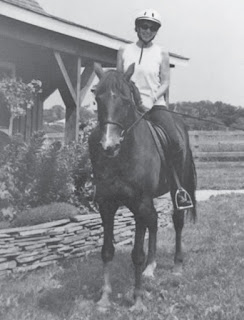 But despite this unpromising beginning, Apple would soon prove herself to be invaluable. Her outstanding attribute was her desire to please.

“It wasn’t long before I realized that no matter what we asked of her, she was going to try her heart out to give it to us,” says Ellie. “This little mare, only 14.3 hands, was going to prove to us that she was worth it. My trainer at the time was training several horses of her own and remarked that the difference between her one horse and my mare was that if she asked her horse to do something, the mare would go out of her way to do otherwise. If she asked my horse to do something, Apple would try hard to understand and to do it.”

In the following years, Ellie and Apple trained in dressage and went trail riding. Ellie was never into showing, but she felt that the dressage training would bring out the best in her “little horse that could.”

“She loved attention and especially loved going out on trails,” says Ellie. “And best of all, she loved the grandkids and nephews that learned to ride her. She was patient and gentle, never took a wrong step when the kids were on her on the lunge line, learning balance and developing a steady seat, legs, and kind hands on the reins. The kids adored her and could not have had a better learning experience than on this sweet mare.”

When Apple was in her late teens, she began to develop a subtle lameness. “It was nothing serious, just a noticeable misstep here and there. After a number of months with various treatments and rest, I consulted a vet that was known as a lameness specialist in the area. She was diagnosed with articular ringbone in her front right leg. We began daily joint supplements and pain medications to keep her comfortable and this greatly helped,” says Ellie. 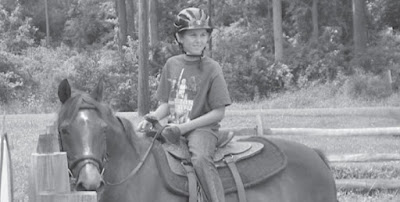 Since Apple was no longer up to dressage, Ellie got Chit Chat so she could keep riding and training. Apple continued giving pony rides, riding lessons and trail rides to Ellie and Bill’s grandchildren. In 2013, Ellie and Bill moved down to Aiken. Apple and Chit Chat followed them a month later, and have been installed at Chime Ridge Stable ever since.

“When she was first here, I was still riding her and had engaged the services of Amber Lee to help ride Chit Chat,” says Ellie. “We would ride together around the property of Chime Ridge Stables, and we would switch horses and Amber would ride her as well.”

When Apple was 28, she started stumbling when she was ridden, and so was completely retired. Today, she lives a life of leisure at Chime Ridge, where she has her own stall and is turned out regularly with Chit Chat. Always an easy keeper (“the kind of horse that will inhale grass and gain 100 pounds”) Apple is still in good flesh, though the dip in her back and her many grey hairs betray her age. She is happy, enjoying life, especially getting treats and attention from Ellie and hanging out with Chit Chat. 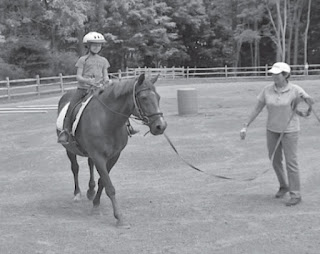 “The two horses are very close and scream for each other when one is taken away,” says Ellie. “They spend each day outside grazing and come into their stalls early afternoon for lunch. I usually go to the barn late afternoon to take them out for grooming and riding.

“In the 22 years that Apple has been in my life, I never went off her when I was seriously riding her,” continues Ellie. “She was always very careful with her steps and very steady when the kids rode her and they all loved her. She is truly worth her weight in gold.”