How do I get my high-headed hunter to be rounder?

Top trainer Jamie Mann shares tips on how to create a nice frame in the hunter ring. 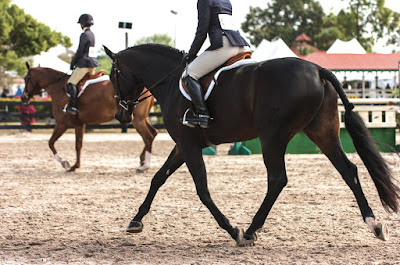 Q: I have a Quarter Horse/Arab/Paint who excels in the hunter ring over fences, but he isn’t impressive on the flat because he is high-headed. I try to make him rounder by applying pressure with my legs while squeezing and releasing the reins and also training with draw reins though nothing works. He is a really good mover, but his head always gets in the way.

A: Not all horses have the ideal conformation to allow them to travel naturally with the lower head carriage desired in the hunter ring. However, many horses whose conformation produces a high head carriage can be taught to flex and carry themselves rounder in the bridle. Both to appeal to the judge in your under-saddle classes and to progress with the rest of your horse’s education, he must learn to go on the bit. Even a horse who wasn’t taught this fundamental lesson early in his career can still learn it. And knowing how to teach horses this lesson is an essential skill for every rider.

When he is accepting this contact at the walk, repeat the same aids at the trot and then, eventually, the canter. Work through these steps slowly. Always close your legs first, asking him to move forward into the bridle, before closing your fingers on the reins. Remember, as all the great trainers say, the only thing that keeps a horse’s mouth soft is your leg.

The next step is to ask your horse to flex in his poll and jaw and come on the bit. There are two ways to do that. First, you can ask with a direct rein, along the lines of the squeezing and releasing you described in your question. Second, you can ask with an indirect rein by practicing lateral movements. The simplest of these is the shoulder-fore.

Start by going back to square one: getting your horse in front of your leg and finding the corners of his mouth. Spend a lot of time teaching him to accept steady contact between the bit and your hands. First, ask him to walk forward with plenty of impulsion. After that, add just enough leg pressure until he almost trots. Then stop him from trotting by taking a soft feel of both reins to very gently say “no.” This is the light contact you want to feel all the time. Having contact does not mean having a lot of contact, but it also means never having no contact. Even if it’s just half an ounce of pressure, your horse has to learn to accept this feel and never try to throw it away.

Teach your horse the shoulder-fore at the walk. Always start by asking him to go forward. Then use your inside leg to move his inside hind leg slightly to the outside. So, for example, if you’re tracking to the left, squeeze your left leg until his left hind leg moves over just enough to step between the tracks of his front legs. Meanwhile, maintain the proper rein length to allow a light contact on both reins with your hands 2 inches above the mane and 4 to 6 inches apart.

You may not get a reaction from your horse at first. That doesn’t mean you gave the wrong aids. He might need several repetitions to understand the concept. As soon as he does, give him plenty of praise and pats.

Lateral movement can easily destroy forward impulsion, so ask for only a few steps at a time, then immediately go forward again. Repeat: lateral, forward, lateral, forward. Try this in both directions. Reward him whenever he does it right.

Gradually, as your horse learns to move away from one of your legs into the opposite rein, he’ll begin to yield more in the bridle. Don’t try to rush the process by seesawing with your hands, moving the bit right and left in his mouth. This ruins the good contact you’re working so hard to establish. The movement in your hands—and the rocking motion of your horse’s nose—also detracts from the beautiful picture you’re trying to create for the judge. A light, steady contact will help you achieve your main goal in the under-saddle classes: to show off your horse’s movement, cadence and rhythm—as well as a pleasant head carriage—in all three gaits.

Jamie Mann and her mother bought her earliest mounts for around $500 each on the Caliente Racetrack in Tijuana, Mexico. Primarily self-taught, she says, “I grew up reading Gordon Wright’s book, Learning to Ride, Hunt, and Show. It was my bible.” At 17, she rode a 3-year-old appendix Quarter Horse in the Maclay Finals. She then worked at an A-circuit East Coast stable for 10 years. During that time, she co-trained the 1981 ASPCA Maclay champion, Lisa Castellucci, and competed Lisa’s legendary show hunter Touch the Sun (featured in our October 2015 issue). Also a successful grand prix jumper, Jamie won a World Cup qualifier in 1981 and was an alternate for the USET in 1982. She then started a training business, Atlantis Farm, with her mother in California and coached Richard Spooner to a win in the 1988 USET Show Jumping Talent Search Finals–West. Now based in Senoia, Georgia, Jamie is welcoming new clients.

This article originally appeared in the February 2016 issue of Practical Horseman.


This article is copyrighted and first appeared in Practical Horseman. It is reprinted here by permission.
Posted by Three Runs Plantation at Thursday, September 15, 2016