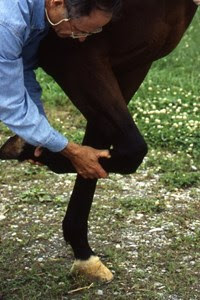 Tendon Sheath Repeat Question: My daughter's horse has injured his tendon sheath during turnout twice in the last year. The veterinarian did an ultrasound each time and determined that there was no damage to the tendon--only that the sheath was swollen. The sheath is on the left hind leg at the front of the cannon bone. He has not been lame, although each time we have put him on stall rest and started hand walking him to bring him back. He also gets two Bute a day during the recovery and has been injected with cortisone during the second or third week following the injury to bring down the swelling. Is there anything else we can be doing to treat this or prevent it from happening?

Answer: The extensor tendons on the front of the hind and forelegs have a subtle role in the posture of the moving leg as it approaches the "landing" phase of each step. These tendons, however, play essentially no part in support. For this reason, injuries such as the one your daughter's horse has affect only the appearance of the leg, which may affect show use, but not soundness.

A lubricating sheath surrounds a tendon wherever it may bend or rub on constraining ligaments at or near a joint. Irritation causes fluid production, overfilling the sheath and stretching it. Once inflamed, a tendon sheath is more likely to refill after events such as slipping, hanging a leg in a vine or fence or other uncoordinated use of that leg. Treatment is rarely absolutely curative, but persistent filling can be controlled, more or less, by bandaging over the area and/or steroid injections into the sheath. Since your daughter's horse seems unaffected by these episodes I would urge you to do nothing unless he is compromised in his utility by filling in the sheath.
--Matthew Mackay-Smith, DVM, EQUUS Medical Editor

Have a question about your horse's health, care or traiing? Our experts offer solutions for a range of equine-management problems. Write to EQUUS Consultants, 656 Quince Orchard Rd. #600, Gaithersburg, MD 20878; email EQletters@equinetwork.comm.

This article is copyrighted and first appeared in EQUUS Magazine. It is reprinted here by permission.