All About The Team 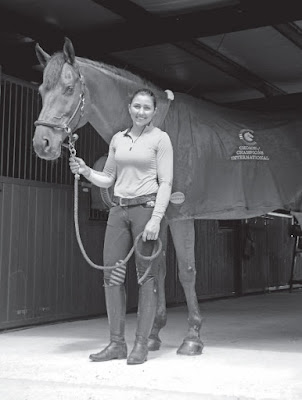 When Christina Kelly was still eligible to ride as a junior, her services as a catch rider on Florida’s hunter/jumper show circuit were in such high demand that she routinely competed scores of horses at each show. Over the course of one memorable weekend in Wellington, she got on 31 different horses. “I was off one and then on another one and back into the ring. I don’t think my helmet came off my head the whole weekend,” she says with a laugh. “It was crazy.”

Christina says that her success as a catch rider was mostly due to the fact that the trainers would bring the horses to the ring ready to win so all she had to do was stay out of their way. “I was good at staying out of their way. I was also good at getting on a horse that I had never ridden before and winning on it. In the Classic, you could only ride three horses. I would usually have six, so I would have to pick. It was a good feeling.”

Now 22 and professional rider, Christina is based in Aiken along with her parents, Barbara and Sean Kelly. Barbara is English, Sean is Irish, and Christina, who was born in England, rode for Ireland as a junior. The family moved to Aiken in January 2016, and Christina has been quietly building her own training and sales business at the new farm ever since. Over the winter and spring, she has been competing at Highfields and trucking her horses up to show in Tryon, N.C.

She also made big a splash at the inaugural Aiken Charity Horse show at Bruce’s Field in May. In the first week of the show, she and Kingdom, a 17.3 hand Irish Sporthorse owned by Andrea O’Brien, won the $5,000 Welcome Stakes. In the second week, they won the $25,000 Aiken Charity Horse Show Grand Prix. Not only did they win that class, they were the only horse and rider combination to have a clear round over Scott Starnes’s surprisingly difficulty course.

“I went first and I am glad I did,” says Christina. “I normally hate to go first, but it was good. I walked the course, we went in and I rode it exactly how I walked it. It turned out to ride a lot harder than anyone had expected.”

Christina has been partnered with Kingdom since February. His owner has a horse shipping company in Ireland and had sent Kingdom to another stable in the Northeast for training and to be sold. An animal who needs a lot of attention, he was not thriving at the relatively large sales stable – in fact, they concluded that he did not have promise to jump higher than the 1.30 meter level. And so he was sent to Christina, where there would be a quieter atmosphere and more personal care. The idea was to get him showing and get him sold.

“He has changed a lot since he came,” says Christina. “When I first got him he couldn’t canter in my jumping ring, which is small and a bit hilly. I think the ring helped him learn to react more quickly and be more balanced. He also craves a lot of attention, which he is getting. I love that his personality is coming out. When he first came he was very cold, but now I feel like we’re friends. He trusts me and I trust him, and if I ask him to do something he gives me everything. I love that. I love how much he tries.” 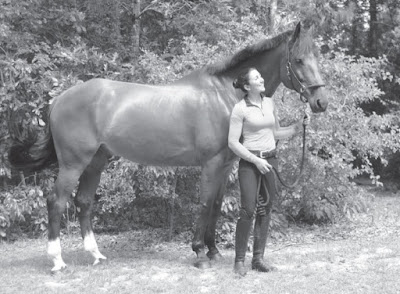 “It was funny though,” says Christina. “When I rode into the ring for the class, he slammed on the brakes, spun around and galloped out. I went right off. The bell hadn’t rung yet, so a friend grabbed him and threw me up on him, and we went in and went double clear and won. He’d never done anything like that before, so I was pretty shocked.”

Now that Kingdom has proven himself as a Grand Prix horse, his owner has decided to keep him. “I’m excited about that,” says Christina. “He gets better and better, and now I can to keep the ride on him. It’s just brilliant to have a horse like him.”

Christina comes to an equestrian career naturally. When she was very young, her parents owned and ran Wycombe House Stud, one of the most successful Thoroughbred breeding stables in England. In the early 2000s, they relocated their business to the United States, buying a large farm in Ocala, Fla. Although Christina had her own pony, initially she was not interested in riding, preferring to go to school, play soccer and be a “regular person.” The family had a summer home in Sotogrande on the south coast of Spain, and when Christina was 9, they moved there year round. There, at the international school, Christina became friends with a girl who loved horses, and it was only then that Christina became interested in riding.

At 10, she had her first taste of competing, got hooked and there was no turning back. She exhibited on the European circuit, showing and winning in classes up to the Grand Prix level. Competing with and against some of the top riders on the continent by the time she was 12, she made a name for herself as a precocious talent with determination, nerves of steel and a ready smile. When the family returned to Florida in 2008, Christina had nine horses of her own to show. She worked with several different trainers, including Kevin Babbington, Shane Sweetnam and Candice King. But the trainer who had the greatest impact on her was the Olympian Margie Engle, with whom she trained for two years. While she was traveling on the circuit and showing with Margie, Christina and her family fell in love with Kentucky and ended up selling their farm in Ocala to buy one in Nicholasville, near Lexington.

It would be impossible enumerate all of Christina’s many accomplishments as a junior rider, which include both junior and all- age Grand Prix wins, high point awards in Florida and elsewhere and a bronze medal in the Junior World Cup riding for Ireland. Then, in January 2012, she aged out of the junior divisions. She had thought at first that she could compete as an amateur for a while on her own horses, but her amateur status was protested immediately and so she had to turn pro. She quickly discovered that life as a freshly minted, 19-year- old professional rider had its challenges.

“It was a hard transition,” she says. “I went from everyone wanting me to ride their horses to having three of my own and feeling like no one was talking to me. I felt like I had dropped off the face of the earth.” Trainers need young riders to show their horses in the junior divisions, but they generally have less need for adult professionals to compete against them in the open divisions.

Facing that reality, Christina decided to further her professional education and headed off to Ireland for the summer. There she worked and trained with Cian O’Connor, an Irish Olympic medalist who has a farm in County Mead.

“It was probably the best experience I have ever had,” says Christina. “I got to learn so much, see the whole management and groom’s side of it, the care of the horses, everything. I was only going to go for three months, but I ended up staying for six.” 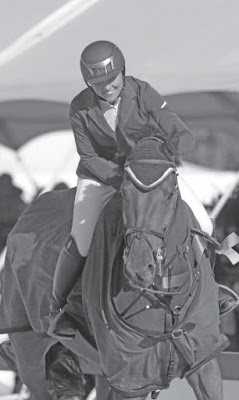 Returning to Florida that winter, Christina began to develop her own business: attracting clients, teaching, training and selling. She also rode for several top stables including Ashland and Raylyn Farms. She was operating mostly out of rented facilities, especially after the family sold their farm in Kentucky. Over the next years, she also had the opportunity to spend more time riding in Europe, both for her education and for her professional career. Meanwhile, her parents, who maintained a home on a lake in Florida, were looking for new place to go with their horses. Kentucky had been too cold in the winter and Ocala was no longer entirely to their tastes. They wanted to be somewhere different.

The Kellys had friends in Aiken, and they had always talked about it as a place where they might want to live. In January of 2016, that idea became a reality when they purchased a 15-acre farm not far from the city limits. There, they have a sweeping view over nearby farms along with a stable, paddocks, riding areas and access to several hundred acres of fields and forest for hacking. This is important to Christina, who feels strongly that show horses need to spend ample time outside the ring.

“I love that our horses can be horses and go out,” she says. “I like them to be happy, and I think they do need time in the paddock.” In fact, Christina is such a strong believer in turnout time that when she was showing downtown in Aiken, she regularly hauled her horses home so they could relax in their paddocks rather than staying in stalls at the showgrounds for the entire weekend.

In addition to competition, sales and client horses, Christina also has a number of young prospects on the farm, most of them products of the Kellys’ own breeding program. One of Christina’s first European show horses was a Holsteiner stallion who is now standing in Kentucky. He is the sire of several young horses on the farm, including two out of Christina’s top show mare Camirage. Christina is excited about the prospect of riding and showing this next generation of her own horses, as well as about the opportunities that she sees in Aiken.

“We love it here; we just appreciate it more and more. I’d love to get a good business going and expand it,” she says, explaining that she has stalls open in her barn now and that they have already selected a site to build another stable when they need accommodations for more horses. In addition to picking up clients, Christina has also attracted sponsorship from several companies, including Champions Choice (“it’s a supplement that I use with all my horses that is really amazing”), Cavalor feed, Der Dau boots, CDW tack, Samshield helmets and Kastel Denmark clothing.

There is no question that Christina has been extremely successful, both as a junior and as a professional, but she has never allowed that success go to her head. In fact, she gives all the credit to her team. These days that team includes her mother Barbara and her father Sean, who is also working as the manager at Mill Race Farm, not far from the Kellys’ new place in Aiken. Today, the Kelly family does all their own horse care (Sean even won the groom’s award for the Best Turned Out Horse after Kingdom’s Grand Prix win at the Aiken Charity Horse Show), though that may have to change if the operation gets much bigger. Christina, along with her mother and father, have always enjoyed taking care of the horses, appreciating the extra opportunity this gives them to bond with the animals.

“I love the horses, that’s the best thing about this business, for sure,” says Christina. “You’re doing what you love and you can travel anywhere with what you do, along with your horses, your best friends. The good days, when you win, when your horses go really well, they make it even better.”