This spring, Aiken was the site of four consecutive weeks of top rated USEF horse shows. Traditionally, the two weeks of the premier Aiken Spring Classic at Highfields were Aiken’s major draw for hunter and jumper riders, providing a competition for local horsemen that also attracted elite equestrian athletes from across the Southeast region. In years past, after the end of the Aiken Spring Classic Finale, these riders moved on, following the circuit elsewhere in their hunt for ribbons, points and prestige.

This year however, the two weeks of showing at Highfields were followed by two more weeks at Bruce’s Field in the new Aiken Horse Park. This facility, which had a soft opening in the fall of 2015, was the site of the inaugural Aiken Charity Horse Show in May, an event created in honor of Bruce Duchossois for whom the horse park is named.

Each of the four big shows this spring offered a range of classes, including events for children and amateurs as well as Grand Prix jumping and hunter derbies. The level of competition was high, as was enthusiasm for the events themselves, a positive sign for the future of horse shows in the city and an indication that Aiken is gaining a stronger foothold in the hunter/jumper world. 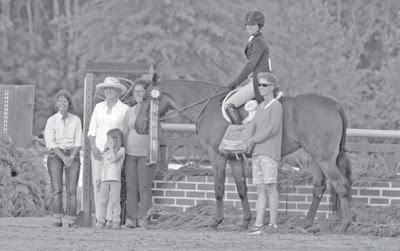 For instance, it was a great weekend for Penny Brennan, a professional show jumping rider and trainer born in England and based in Alabama. Penny won the Welcome, taking the top spot with Cord 11, a 17.1 hand 12-year-old gelding owned by Meco Equestrian. She was also second aboard her own Sun Tzu, a 12-year old Irish Sport Horse. Penny and Sun Tzu are on a roll – this winter they set the Gulf Coast Classic Winter Horse Shows (Mississippi) afire, winning, among other things, the $35,000 Budweiser Grand Prix. Daniel Geitner, one of Aiken’s top professionals, also found success: after finishing second behind Penny in the Welcome, he and Creativo, owned by Lionshare Farm, came back to win the $25,000 Grand Prix on Sunday. Doug Payne, who is better known as an event rider, was second aboard Courtney Young’s Botanja and Daniel picked up third with the Kenwood Syndicate’s Kenwood.

The $15,000 USHJA International Jumper Derby on Saturday was one of the most exciting classes of the weekend. Held on the Dietrich Derby Field, it was presented by Dietrich Insurance and sponsored by Mystery Stables and Brenda and Bill McKay. The International Hunter Derby is a hybrid between a hunter and jumper class. Recalling hunter shows from half a century ago, it features tall, natural fences and its two, independently scored rounds that reward horses for boldness and brilliance over the course.

Liza Boyd, based in Camden, SC, is one of the country’s top riders in the derby, having won countless trophies, as well as the 2013 and 2014 International Hunter Derby Championship aboard Brunello, a horse that is so famous he has his own fan club and even his own Breyer model. This year, Liza had a number of rides in the class, and came out the winner aboard Like I Said, an 8-year-old first year green mare owned by Pony Lane Farm. Liza was also third on Pony Lane Farm’s 6-year-old stallion Coronado. Havens Schatt, Liza’s closest competitor, was second on John Yozell’s Breeze.

On Sunday, the final day, riders assembled to take stock of the course set for the $25,000 Carolina Company Grand Prix. Skies were threatening overhead, and there was a brief downpour between the course walk and the first round. The skies cleared, however, as the action started, and everyone jumped in the sunshine. Penny Brennan and Cord 11 won, with Daniel Geitner and Creativo a close second. Christina Kelly, riding Andrea O’Brien’s Kingdom was third.

As ever, Rick and Cathy Cram, who own Progressive Show Jumping and put on the Aiken Spring Classic, created a show that catered to the exhibitor, with plenty of social activities for riders and spectators alike. These included brunches each Sunday in conjunction with the Grand Prix, exhibitors’ receptions, breakfasts and barbecues. On Sunday, April 24, the Crams dedicated their new viewing pavilion to Mary Ann Parmelee at the brunch before the Grand Prix. Mary Ann Parmelee was Rick Cram’s mother, and an important figure in the development of the horse show circuit in Aiken.

After the Aiken Spring Classic Finale, the competitors packed up and moved everything a few miles across town to Bruce’s Field for the Aiken Charity Horse Shows I (May 4-8) and II (May 11-15.) There was a strong buzz about these shows, and competitors were coming from near and far to participate. One reason for this was that everyone wanted to try out the new arenas with their professional GGT Footing. Another was to honor Bruce Duchossois, who died in 2014. Bruce was immensely well known in the horse show world, both as an amateur competitor in the hunter divisions and as a tireless promoter and supporter of all equestrian sports. The show management limited the entries to 500 horses, and had no trouble filling all their stalls. 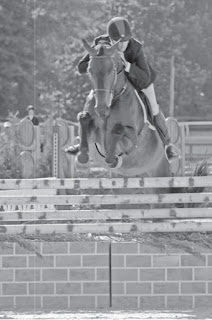 Throughout the show, there was an emphasis on the exhibitors’ experience. Riders and spectators alike gathered under the ringside pavilion every afternoon to watch the classes and enjoy refreshments that were set out at 4 p.m. Members of Bruce’s family, including his father, also Bruce, were on hand to give out trophies and to honor the younger Bruce’s memory. Bruce senior, who is in his 90s, came all the way from Illinois.

The first featured event of the inaugural week was Friday’s $25,000 Aiken Charity Hunter Classic presented by Cold Creek Nursery. The winner of this class was, appropriately enough, Havens Schatt, who used to be Bruce’s trainer and who came to Aiken specifically to honor to his memory. Havens rode Aristocrat, a gelding owned by Tracy Scheriff- Muser. In an emotional moment after her win, she was presented with a glass trophy box that contained one of Bruce’s trademark velvet helmets. Havens was also third in the class riding John Yozell’s Breeze, while Liza Towell Boyd was second (by half a point) riding Stella Styslinger’s O’Ryan.

Saturday featured the $25,000 Premier Grand Prix, “The Inaugural Cup” presented by the City of Aiken. The winner of this class was Clueless P, owned by Hester Equestrian and ridden by Lauren Hester. Lauren is based in Kentucky, and Clueless P is a 10-year- old Hanoverian mare that has Above: Daniel Geitner; Right: Havens Schatt. International Hunter Derby at Bruce’s Field competed successfully all over the country. Daniel Geitner and Creativo cashed the second place check, while Penny Brennan and Cord 11 were third. Other featured classes included Thursday’s $10,000 Future Hunter Stake (Tosh Hunter riding Betsee Parker’s Liberty Road) and the $5,000 Aiken Saddlery Welcome Stake (Christina Kelly aboard Andrea O’Brien’s Kingdom.) 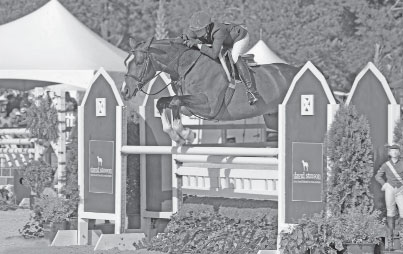 The Aiken Charity Horse Show II took place from May 11-15. On Saturday, May 14, members of Bruce’s family were on hand for grand opening ceremonies that included a ribbon cutting ceremony, a speech by Rick Osbon, who is the mayor of Aiken, and even recorded remarks from Nikki Haley, the governor of South Carolina.

The opening ceremony was followed by one of the two featured events of the second week, the $25,000 USHJA International Hunter Derby. This was an especially competitive class with such entrants as Harold Chopping, Havens Schatt, Daniel Geitner, Jennifer Alfano and Christina Jason, among many others. But if you are in Aiken and it’s a hunter derby, the favorite always has to be Liza Boyd. Liza had two impressive horses for this class: O’Ryan and Like I Said, coming in off her win in the same class at the Aiken Spring Classic.

After the first round, true to form, Liza was sitting in first on Like I Said and second on O’Ryan. When she returned for O’Ryan’s second round, she rode boldly and made some errors that dropped her down to 11th place. Coming back with Like I Said, and ahead by a comfortable margin, she rode more conservatively, taking most of the high sides, but not cutting too many corners. The mare was letter perfect, earning the win and the Bruce R. Duchossois Cup, presented by Jack Wetzel. Liza only recently took over the ride on Like I Said, who made her debut in the hunter divisions in Florida this year under Kelly Farmer. An athletic mare with a pretty head and a scopey jump, Like I Said and Liza seem destined for great things.

Sunday, the final day of the show, featured the $25,000 Aiken Charity Horse Show Grand Prix presented by First Citizens Bank. The course, set by Scott Starnes, had a number of tight turns, along with some difficult distances. When the riders walked the course they knew it would be a test of handiness and scope, but few probably recognized just how difficult it would prove to be.

Christina Kelly went first on Andrea O’Brien’s Kingdom, a 17.3 hand Irish sporthorse that had just stepped up to the Grand Prix level two weeks earlier at the Aiken Spring Classic. Christina rode with precision and confidence to go clear – Kingdom, who has the power to jump cleanly from a long spot, wasn’t fazed by anything. Then Christina settled in to watch the other rounds while waiting for the jump-off.

But there wouldn’t be one. Horse after horse hit the fences, and rails clattered to the ground. Of the 17 horses that jumped, only Christina and Kingdom went clean to take home the blue. Erin McGuire riding her horse Kasarr had the fastest four-fault round, earning them second place honors. Lauren Hester and Clueless P came in third.

Everyone agreed that the Aiken Charity Horse shows were a resounding success, reflecting the hard work put in by the board of directors of the Aiken Horse Park and staff. The success was also due in great part to the positive attitudes of the exhibitors, who came to the show not just to ride and to jump, but to honor the memory and legacy of Bruce Duchossois. The show benefitted Equine Rescue of Aiken, the Child Advocacy Center of Aiken County and Danny and Ron’s Rescue.