Jumping into the Horse Business

On April 14 and 15, 2016, McLain Ward, the two-time Olympic Gold Medalist, will come to Five Henry Stable in Aiken to conduct a showjumping clinic. McLain, who at 40 has been at the top of the game for many years, rarely gives clinics, and getting him to come to Aiken is something of a coup, especially in 2016, an Olympic year.

“We were looking for someone to give a clinic,” says Jane McDonald, who owns Jane McDonald Training and Sales. Jane’s husband, Cameron McLeod, is the manager and trainer at Five Henry, and Jane herself used to work for McLain Ward. “Someone suggested that I call McLain, and so I did, and he said okay,” she explains simply.

The two-day clinic is for 24 riders, and it sold out almost immediately after it was announced, even with the relatively steep $1000 rider’s fee. But perhaps this is not surprising: being able to learn from a horseman of Ward’s caliber is a rare opportunity indeed.

The McLain Ward clinic is the first public event put on by Five Henry Stable, which was established in March 2015. Five Henry is located just off Route 302 in the middle of the polo and eventing corridor east of Aiken. It has a large arena with professional Martin Collins footing, a set of show-ready jumps, and a grass derby field complete with schooling and competition banks. Set on about 20 acres, the facility includes an attractive, breezy stable and ample turnout for the horses that live there.

These horses are a small collection of well-started as well as seasoned jumpers and eventing horses imported from Europe. Hugh Lynch, who owns Five Henry, selected them specifically for amateur riders, and imported them to sell on the American market. Hugh, who lives in Charlotte, N.C. with his family, is a fairly recent convert to the horse business. His career has included many years of working at Bank of America, followed by successful ventures in real estate and other businesses. His wife Stephanie is the co-owner of an investment firm that manages money for college endowments and foundations. As Hugh explains it, he got into horses through his daughter, Avery, a 14-year-old eighth grader who rides at Fairytale Farms in Charlotte.

“She started riding and showing when she was 8, and she got very serious about it,” says Hugh. “So I got interested in it, too. I got very interested in the horse side of things, and pretty soon I began to think about starting a business.”

Although Hugh did not have in-depth experience in the horse show world before, he did grow up on a farm in western Virginia where his family raised beef cattle. He had ridden Quarter Horses when he was young, and he was comfortable being on a farm and in the country. He and Stephanie discovered Aiken a few years ago when Avery started coming down to show at Highfields. 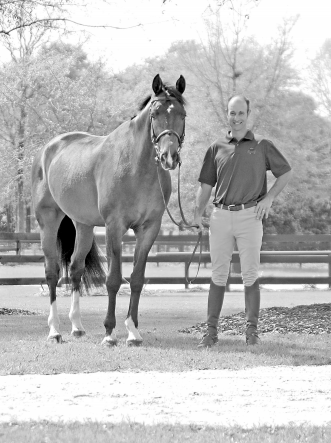 “We love Aiken,” says Hugh. “It’s a charming town and there is such a robust horse community here, we thought it was a good place to set up shop.” Hugh says he was particularly impressed by the fact that there are so many different competitive opportunities in Aiken that it is possible to put a lot of show miles on a horse very quickly. “We love Highfields, and we’re very excited about the new shows at Bruce’s Field. Now that I see how strong the eventing world is here, I am interested in that, too.”

After making the decision to base his business in Aiken, Hugh found the property that would be Five Henry, formerly a polo farm, and started converting it into a jumper stable. He also learned as much as he could about all aspects of the horse world, by reading, asking questions and consulting with top horsemen, including Scott Keach, a member of the Australian showjumping team who is based in Florida over the winter. Through Scott and other connections, Hugh became acquainted with horse professionals in Europe. In his first year in business, he has made a number of overseas trips and imported about half a dozen horses. Three are currently in Wellington where they are in training with Scott Keach and Kurt Martin (an event rider), while the rest are at Five Henry. There, they are trained and conditioned by Cameron McLeod, who competes in showjumping and eventing. One horse, imported from Ireland, spent the winter eventing under Jane McDonald and shows promise in that discipline.

Hugh is a student of conformation, and has developed a keen eye for a horse with potential in the show ring, which complements his highly developed skills as a businessman and entrepreneur. Although Hugh’s intention was always to select horses suitable for amateur riders, at least one of the jumpers he picked out has Grand Prix potential and is remaining in training with Scott Keach to continue his development.

Buying and selling horses can be a tricky proposition, and Hugh recognizes that. “I was and am very humble about the horse business,” he says. “I think it will make you that way pretty quick if you aren’t. I’ve got an analytical background and I have taken a methodical approach to learning. I know there are no guarantees, but I try to mitigate the risk with thorough vetting, proper care and putting the horses in the right place for them.”

“We’re not trying to be big,” Hugh continues. “Our goal is to find good horses that we like, with the idea that someone else will like them too. The first thing I always ask myself when I am looking at horses is what would I let my daughter ride? For an amateur horse, you want all the scope, but you also have to ask yourself is he careful, does he have a good mind? Reputation is very important to us, and we hope always to stay on the high road and to do things right.”

Cameron McLeod will be competing Five Henry horses in the jumper classes at Tryon, N.C. this spring before coming back home for the Aiken Spring Classic at Highfields and the Aiken Charity Horse Show at Bruce’s Field. Meanwhile, Avery Lynch is doing well on the hunter circuit in Charlotte and will be going to Devon in May. The Lynch family seems to be on an upward path in the horse world.

And the name Five Henry? Where does that come from?

“Five Henry Street was the address of a house I lived in when I was in college in Virginia,” say Hugh. “College is a special time. I lived there with six really good friends; we have a reunion every five years, and we’re always remembering Five Henry Street and all the things that went on there. So when I was looking for a name, that is what I thought of.”