When Barbara Jacobs and Leslie Farne relocated from Katy, Texas to Wagener, S.C. last summer, they did not travel light. In addition to themselves, their four French bulldogs and their two African Grey Parrots, they also brought along 22 horses, 18 of which were rescue horses that they saved over the years.

“It was kind of funny,” adds Leslie. “Because we had to rent a whole Brookledge van for them. So we had these 20-to-30 year-old rescue horses walking up the big ramps into the van and looking around to say ‘this is nice!’ And you had to think that the same van was probably just used to haul fancy show horses.”

Barbara and Leslie run Blue Ribbon Meadows, a business that provides boarding, training and lessons alongside their 501c3 charity Blue Ribbon Equine Rescue. Back in Texas, Blue Ribbon Meadows was a 100-acre facility with six barns, many acres of paddocks and a full eventing course where they ran USEF as well as unrecognized competitions. The new facility in Wagener is considerably smaller, situated on 33 acres that encompasses houses for them and for the people that work for them, stabling for the horses as well as pastures and paddocks and riding areas. There are two arenas with professional GGT footing, one of them under cover, and there is access to miles of trails. 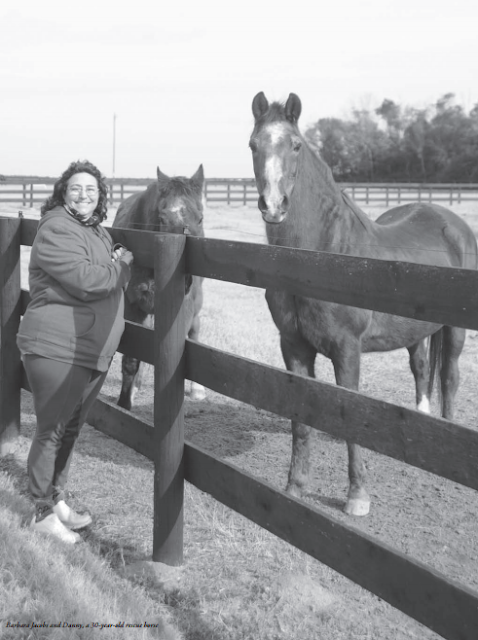 The rescue and show horses divide their time between pasture and turnout. This year, Blue Ribbon is also home to a number of polo ponies on winter break, which occupy one of the farm’s big grassy pastures. There are a few other client horses, including show horses and retired horses.

“Our rescue horses have always been treated exactly the same as our show horses,” says Barbara. “That’s how we’ve always done it. Everyone gets the same care. They’re all handled twice a day, and they all have stabling. They all get wormed, vaccinated, groomed, bathed, blanketed, massaged – whatever they need. We feed the old ones four times a day, and all their feed is soaked, so they might get soaked beet pulp, soaked alfalfa, soaked timothy hay. And you can see that none of them are skinny, even the 30 year-olds with no teeth, because they can absorb what we are feeding them.”

The oldest horse that Blue Ribbon ever had lived to 39. “We got him when he was 30, says Leslie. “His owner had passed, and the son called us up and we went and got him. He ended up living for nine more years.”

Barbara, who has been teaching, training and competing in showjumping, eventing and dressage since she was very young, says she got her first rescue horse in 1980. She is originally from Long Island, and that was where she obtained a horse named Katrina from the slaughter buyer. Katrina was skinny, and so she fattened her up, rehabilitated her and eventually found her a new home. Barbara’s rescue operation started there and continued to grow alongside her teaching and training business. At Blue Ribbon Meadows in Texas, she and Leslie took in horses destined for slaughterhouses in Mexico and elsewhere, along with some from the Amish auctions in the Midwest and abuse and neglect cases confiscated by the Houston SPCA. They say that they can care for as many as 30 rescue horses at one time, as long as they have the funds to do so.

“It always bothers me when a rescue takes on more horses than they can afford to feed,” says Leslie. “If we have the money to feed 20 rescue horses, that is how many we are going to have.”

Blue Ribbon Equine Rescue is partially funded by income from the training and boarding business and partially by donations. Since moving to Aiken, Barbara and Leslie have found that their donations have dropped off – few local people know about their operation. They are hoping to change that.

“In the Houston area there were about seven horse rescues,” says Barbara. “There are always horses needing rescue, so the more rescues you have, the better. When there is an obvious abuse and neglect case, people do step up to donate and help out. But one thing that people forget about is that once that horse is rescued, he doesn’t go away. Even if he isn’t skinny or sick any more, he still needs care and he still needs food, and he might live a long time. Just because he is with a rescue, it doesn’t mean he doesn’t need any help.”

She adds that if people want to contribute but are not comfortable sending money, the rescue is happy to take donated feed, blankets or vet care. “We get our feed from Aiken County Farm Supply and we have our vet work done by Sabrina Jacobs at Performance Veterinary Services. So someone who wanted to help out could donate a bag of feed or a bale of alfalfa, or a couple of teeth floatings.”

As far as the future goes, Barbara says that she and Leslie are looking forward to growing their business and their rescue in Aiken, getting more clients for boarding and training and becoming an established part of the horse community.

“I’d like to have a really awesome sanctuary for these old horses and a very private dressage and eventing stable,” says Barbara. “I love teaching. Teaching to me is art –it’s like painting a picture. It keeps me up at night if a lesson didn’t go that well and I’m always thinking about how to make it better.”

Barbara, who is a cancer survivor, says that she teaches all levels, but that adult beginners are her favorite pupils. “If they have anxiety, I completely understand that. When I was younger I might have been ‘Today we’ll go jump that truck – it’ll be fine.’ But now I completely understand anxiety, and I can help work through it. The only thing I don’t understand is people not wanting to put the time in to their goals. If your goal is to ride and you want to show and you’re not willing to get on and do the work, I don’t understand that. If the trot is your Olympics and that is what you want to do, that’s fine. But if you want to show and compete at a higher level, you have to put the time in.”

Barbara and Leslie and all their animals are enjoying their new home. “I love it here – the people are so kind and the climate is so mild,” says Barbara. “And the horses love it too.”

The last statement certainly appears to be true. Barbara and Leslie have a few warmbloods, including a dressage schoolmaster that is available for lessons. In addition, there is Barbara’s 6-year-old appaloosa, a surprise bonus from rescuing an unexpectedly pregnant neglected mare. The rescue horses are a diverse assortment of individuals, from mini donkeys, to retired Standardbred racehorses, former equitation mounts and various animals brought back from the brink of starvation. One rescue horse, Danny, a sprightly 30-year old gelding of uncertain breeding comes happily to the edge of his paddock to pose for a picture.

He pricks his ears at Barbara, eager for attention, and she greets him enthusiastically. “We love our rescue horses,” she says. “How could you not? How could you not rescue?”

This article is copyrighted and first appeared in The Aiken Horse. It is reprinted here by permission.
Posted by Three Runs Plantation at Friday, May 06, 2016