The Horse: An Epic History

A Scientific Look at Horses 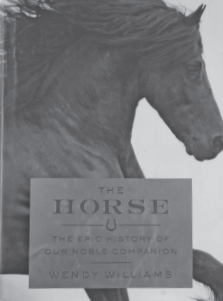 The Horse, an Epic History of Our Noble Companion, published October 2015 by Scientific American/Farrar Straus and Giroux, is a different kind of horse book. From the outside, the book does not look especially out of the ordinary. Start to read, however, and you will discover that it is. There are many horse books that discuss how to ride, care for or handle horses. There are others that offer beautiful pictures and tributes to the horse as a noble figure. Then there is a growing body of biographical horse books – think Seabiscuit and the Eighty Dollar Champion. But there are few books that offer an accessible scientific look at horses. This book fills that gap.

The Horse is a natural history, starting with the cat-like prehistoric horse ancestor Eohippus, the dawn horse. According to the fossil record, Eohippus originated in the Wyoming area about 56 million years ago. The modern horse evolved in North America, and spread into Europe through Beringia, a vast grassland steppe that once connected the two continents. Then, about 11 million years ago, horses disappeared from the new world and wouldn’t return until Cortez brought them on his ships from Spain in the 1500s.

Why did horses disappear from North America? The book explores some of the controversies that still rage among paleontologists. Were horses hunted to extinction? After all, humans appeared in North America at about the same time the horses vanished. Or could their decline and  disappearance have more to do with the changing climate and landscape of the continent? The latter seems to be more likely, but proponents of the alternative view can be surprisingly vehement in their belief.

Moving on from equine evolution, the book covers some aspects of early horse art – carved figures and cave paintings, all evidence of the long association between people and horses. Less romantically, this association is demonstrated in archeological sites that prove that people of the Ice Age hunted and ate horses in great numbers. The discussion of the growing partnership between the two species continues, but stays focused on the natural history of the horse, rather than on how horses helped humans or functioned in civilization. For instance, there is some exploration of when and how horses became domesticated, and of how their anatomy evolved in such a way as to make their backs uniquely suited to riding, but there is no explanation of the evolution of riding styles, or of when horses were used to pull plows or cannons.

Finally, the book touches on some more recent events in the history of the horse/human relationship, as well as research into the workings of the equine mind. Although horses have had a long and intimate partnership with humans, they have not been the subject of much scientific inquiry until very recently. Even now, there are not many studies of the way horses perceive the world and how they think. Most scientists who are doing research on horses have done it as a sideline to their primary work. These scientists include Brian Timney, a Canadian vision researcher who has demonstrated that equine long distance vision acuity is about two thirds as good as a human distance vision, which puts them ahead of the other non-primate animals studied so far. 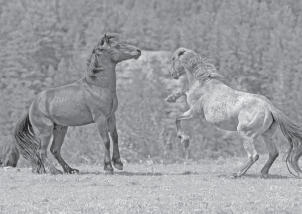 All of this material could be dense and difficult to take in, but it isn’t. The book is written in a conversational style and leavened with personal anecdotes and interesting facts about horses. Why are the wild horses of the Camargue in France white? Most likely because horse flies, endemic in the marshes where they live, are less attracted to light colored horses and so the white ones thrived while the darker ones did not. (Anyone who has ever been on a trail ride with a white horse and a dark colored one might agree with this interpretation.) Who is in charge of wild horse herds, the stallions or the mares? Folklore says the stallions, but wild horse biologists say the mares – the stallions are flashy, but they are essentially “drama queens” while the mares quietly run the show. Mares that live in one band of wild horses have even been known to sneak off to another stallion to breed with him, and then return to their own bands to have their foals.

Wendy Williams, the book’s author, is a lifelong horsewoman who has owned and ridden many different types of horse in her life. She grew up with American Saddlebreds in Pennsylvania, starting to ride at the age of 5. She rode through high school and college, and then gave horses up to go to Senegal where she was a Peace Corps volunteer. Upon her return, she embarked on a journalism career, working mostly for newspapers and doing a stint as a high-end travel writer. Her equestrian resume includes riding and showing hunters as well as playing arena polo in New England. Details about her own partnership with horses run through the book as a leitmotif, mostly centered on Whisper, a horse she owned when she was 20. An “equine Einstein,” Whisper knew how to open his stall door with his lips and turn on the water faucet with his hooves. “I’ve never been a  professional horseman,” she says. “But at one time I was immersed in the world of horses and quite happy.”

Although Wendy says she does not have a horse now (her work has kept her too busy) her lifelong fascination with horses was the impetus for writing the book. Aside from wanting to contribute a scientific work to the equestrian library, she also wanted to make sense of some of her own experiences with horses throughout her life.

“I think a lot about the horses that I have had in my past, and wonder a lot about them, and like so many people when they get older, I regret that I didn’t do things better,” she says. “I don’t think I understood them enough. I was taught to ride in a show horse barn when I was very young, and it was not an enlightened time. My education taught me to think of the horse as a tool, and it took a long time for me to grow out of that and think of horses as beings with thoughts and feelings like my dog. Once I started thinking that, I wondered where that question would take me.”

As it turned out, the question would take her on a journey around the world, to Mongolia, Spain, France, Germany, Austria and many parts of America. There, she visited and learned from people conducting research in many different areas, from paleontology and archeology to the evolution and behavior of wild horses in various regions.

“Sitting down and writing the book after all this research was really fun,” she says. “It was interesting to see how everything fit together. I knew I wanted to understand evolution – why the horse started with five toes and ended up with one hoof, for instance. The biggest takeaway I got from the research I did for this book is that the horse that we have in the world today was not inevitable, and it’s important for us to treasure the wonderful gifts that we have.

“The other thing is that when I was a kid I was taught that the horse had a brain the size of a walnut. As I worked on this book I came to understand that that is completely incorrect. The horse is much smarter than I was taught as a child, and he would have to be to have survived for 56 million years. I think we often do not give the horse enough credit.”

Wendy also came away from writing the book with a renewed appreciation for the partnership between horses and people, and a belief that the domestication of horses, like the domestication of dogs, was not just a one way street. Horses may have chosen to be with people almost as much as people chose to be with horses, and our similarities are at least partially responsible for our attraction. 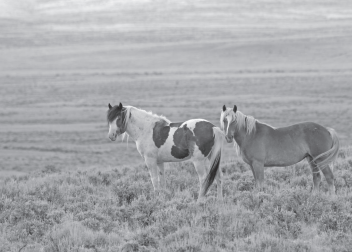 “There’s a triumvirate of horses, dogs and humans that traveled through the world together,” she says. “My opinion is that this is because we have very similar biology to begin with, and our biology in particular makes us interested in small groups. Research on wild horses tells us that horses don’t live in herds; they live in bands and they have relationships within those small bands, just like humans do and just like dogs do. So there is a built in circuitry that allows horses and humans to be together just the same way as it allows humans and dogs to be together. I wanted to help people see that, and help them see that both of our species weathered some pretty difficult things in the history of our life on this planet. We have a lot in common, and we are so similar.

“The American Museum of Natural History used to have as its emblem a skeleton of a rearing horse side by side with a skeleton of a human reaching up to his shoulder. I think that’s really a good symbol for our evolutionary partnership and for our partnership in the world today.”

The Horse: The Epic History of our Noble Companion is available in Kindle and hardcover editions. Find it online or at your local bookstore, and join the community on the book’s Facebook page.

This article is copyrighted and first appeared in The Aiken Horse. It is reprinted here by permission.
Posted by Three Runs Plantation at Friday, March 11, 2016