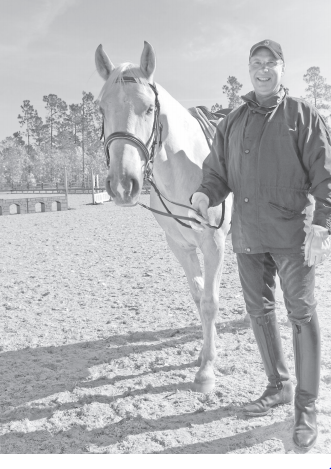 Pierre Cousyn, born and raised in France, is a Grand Prix dressage trainer and instructor who moved to Aiken in the fall. A graduate of the French National School of Equitation at Saumur, he has two diplomas: one that certifies him as a teacher and trainer, and an advanced degree that shows that he is qualified to be a trainer of trainers. After arriving here in October, he purchased property at Three Runs Plantation and looks forward to building a home and offering his services to Aiken’s horse people.

“I heard so many good things about Aiken,” says Pierre, who comes most recently from Wellington, Florida. “When I learned that dressage was not as big here as some of the other disciplines, I thought there was an opportunity. Maybe there is a demand for a good dressage trainer . . and I am hoping that my thought will pay off.”

Having obtained two diplomas from Saumur puts Pierre in elite company. The prestigious school has a limited number of places for students – just to be accepted is an accomplishment. The curriculum is rigorous and includes several different disciplines: Although now Pierre specializes in dressage, he studied and competed in eventing and showjumping as well. Throughout his dressage career, he has also worked with some of the top names in the sport in France, Germany, Switzerland and the United States. His resume includes letters of recommendation from such luminaries as Philippe Karl (the founder of the French “School of Lightness”) and Günter Siedel, the German-born dressage rider who has competed on the U.S. Olympic team for many years.

Although his equestrian credentials are impeccable, Pierre says that he does not come from a family that had horses – quite the opposite in fact. Growing up in Lille, a city in the north of France near the Belgian border, he got involved with horses by chance when he started riding with the pony club at the age of 9. As he explains it, the pony club was a low cost riding school for children.

At 14, Pierre graduated from pony club and started taking lessons at the local riding school, which was run by a retired cavalry officer.

“My father didn’t want me to go into the horse business,” says Pierre. “He wanted me to go to college and he thought the horse business was the wrong direction. But all I wanted to do was be with horses. The school was about ten kilometers away, and I had to go by myself on the bicycle – rain, snow, it didn’t matter – and I traded work at the stable for my lessons. It was a good thing, because if you didn’t want it enough, you just quit. I didn’t care about the snow and the cold. I just cared about the horses.”

Before long, it was time for him to apply to Saumur and in 1981, he went there for the first time. The riding school was run by the military and it was very strict and tough. It included a great deal of academic work – biology, physiology, anatomy and riding theory – as well as all aspects of horse care and riding.

“We had five lessons a day, always on a different horse. Lots of work on the seat, work without stirrups. And it was all free, supported by the government. This was fantastic for me. I could have access to this wonderful education, where everyone had the same chance. You could be a millionaire, but you couldn’t come with your own horse. They gave everybody the same horses.”

After receiving his first degree, Pierre says he went out on his own to teach and train, explaining that you were required to teach for three years before you could return to Saumur for the advanced degree. Again, admission was highly selective, with just 15 openings. Pierre was admitted at the top of his class.

After receiving his second degree, he continued work as a freelance instructor and trainer. At that time, dressage was dominated by the Germans, and larger, heavier warmbloods were in vogue. Pierre, who had been trained exclusively in the French school of dressage created for a lighter horse, began to feel that he was missing some training tools, and so he went to Germany to study the German system.

“I learned a lot,” he says. “There were things I liked and things I didn’t like. So I thought why not take the best of both schools, and I started to mix both. Today, I try to teach classical principles, but modern dressage. Classical rules are very rigid; modern dressage respects more the biomechanics of the horse.”

Pierre first came to the United States one winter about 20 years ago on what was supposed to be a vacation. He was working in Switzerland where it was very cold and damp, and he decided to go to California to find some better weather. Before he left, he placed a small ad in a California dressage publication to say that a French dressage rider was coming and would like to meet dressage people. He got five responses, including an invitation to give a clinic in Napa Valley. He went, gave the clinic, and found himself traveling around the state to teach.

“I fell in love with California. And when I came home, I had a job offer in the Napa Valley.”

And so about a year later, he moved to the California. There, he  trained and taught for many years. He also met and married his former wife, Elizabeth Ball, a dressage rider who represented the U.S. on the silver-medal-winning team at the Pan Am Games in 1995. When that marriage ended after five years, Pierre stayed in California, continuing to work as a freelance trainer. Then one day, he got bucked off by a client’s horse and needed surgery.

“I started having my doubts about freelance,” he says. “Overnight, I had no income. I started thinking I needed to prepare for the future and needed to have my own farm. But it was very expensive to buy in California.”

Hearing that land was more economical on the East Coast, he went to work at a stable in New York (“I didn’t like it – it was too cold,”) and then relocated to Florida, where he bought property in Wellington. He stayed there for about five years, but was not happy with the hot and humid weather, or with the fact that the area offered few opportunities to ride out of the ring.

As far as his teaching and training philosophy goes, Pierre believes in the basics and in classical principles. He says he prefers to do much of his work at the walk because this promotes calmness and relaxation in the horse and makes it easier to teach him new things. He has a step-bystep approach and believes that most training problems can be solved by taking things slowly and making sure that the horse understands what is being asked of him.

“My horse is my student,” he says. “I am the teacher and my job is to  be the best teacher I can be. If my horse doesn’t understand, I believe it is my fault. It is always the rider’s fault. Always. And by thinking this way, you are going to be the best rider you can be, because it forces you to think, to use your brain and not your muscles. If I want to challenge my muscles, I go to the gym. I like dressage because it challenges my brain, not my muscles. If my horse has a problem with something, I reexplain. If he still doesn’t understand, I change my explanation. It’s the same with people.”

Pierre says that he enjoys competition and believes that showing is an excellent motivator and a way for riders to evaluate their progress. But for him, dressage itself is more about training the horse and rider to be the best that they can be. Although he certainly enjoys having students who ride at the upper levels, he is also happy to teach lower level riders, beginners and people from different disciplines.

“I have two conditions: you have to be open-minded and you have to be motivated. I don’t care what level you are or your horse is, as long as you want to learn. I was teaching somebody once who rode a mule – the principle is the same.

“The beauty of dressage is that you don’t have to have a fancy horse,” he continues. “You can take any kind of horse and teach any horse to be on the bit and relaxed. The most important thing is the relationship between you and your horse.”

Pierre Cousyn is available to come to your barn to teach. Or make arrangements for lessons at Three Runs Plantation.

This article is copyrighted and first appeared in The Aiken Horse. It is reprinted here by permission.
Posted by Three Runs Plantation at Friday, March 04, 2016