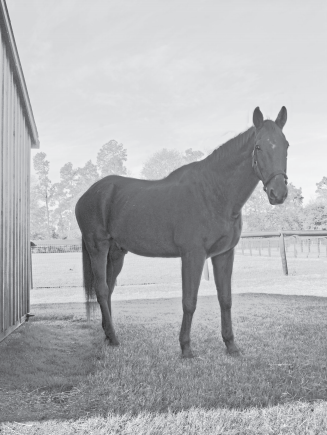 Wherever he has gone in his life, Dino has always stood out. This is literally true: Dino, a 1992 chestnut Thoroughbred gelding, is a giant at 18.3 hands tall. This makes him one of the tallest Thorough-breds on records, and certainly a horse to make you stop and look.

Jean Bickley, who owns this gentle giant, explains that Dino is just his barn name - it comes from the purple dinosaur in the Flintstones cartoons. His name when he was showing was, appropriately enough Jem Hill, also the name of Jean's grandparent's farm in Pennsylvania. Officially, on his Jockey Club papers, he is Kenogami, after a town in Canada.

Like most Thoroughbreds, Dino was bred for the racetrack. His father was the immortal Slew O'Gold, a two-time Eclipse Award winning stallion by Seattle Slew who was inducted into the Thoroughbred Hall of Fame in 1992, the same year Dino was born. His dam was Wondrous Me, a broodmare sired by My Dad George. Dino was bred by Joseph Allen, who is most famous in racing circles for breeding the champion War Front, currently one of the leading sires in the world. Dino was born in Kentucky on February 28, 1992, a solid chestnut colt with long legs and a big heart.

Although he was broken for the racetrack, when it came time to train him seriously and send him to the races, it was decided that he was just too big. So Joseph Allen, who still owned him, decided to turn him into a riding horse. At first Dino went to a show horse trainer, but then Mr. Allen decided that he wanted to ride the horse himself, and so brought him home to Connecticut. Mr. Allen was not, however, a rider, and didn't have as much time to devote to his new project as he had expected. At the time, Jean Bickley was galloping racehorses for Peter Brant, who is Joseph Allen's cousin. When Allen realized that he wasn't really going to be riding his giant 3-year-old Thoroughbred, he offered the horse to Jean.

"I think I paid a dollar for him," says Jean, explaining that she rode on the hunter circuit as a junior and wanted to get back to showing as an adult, "He was a nice project, and he was affordable because he was basically free." 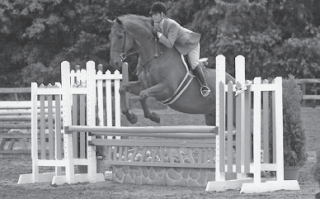 Jean trained him and showed him in the hunter and adult equitation divisions at shows in Connecticut and the surrounding area. A sweet-tempered and willing horse, Dino was always ready to do anything.

"He was very all-purpose. He did the hunter shows, then he would go out and do a hunter pace, and then he'd do combined tests. I took him to clinics for eventing and for hunters. He was very easy to handle. You could load him on the trailer with your pinky finger, and he'd stand there all day." In addition to these things, Dino also enjoyed riding on the trails and on the beach near his home in Fairfield, Conn.

Dino's exceptional size did require some accommodating. His bridle needed to be a combination of a regular bridle and an oversized bridle, because a regular bridle was too small and an oversized bridle was designed for a different type of horse and did not fit well on his Thoroughbred head. He always needed extra long reins. To groom him, most people used a ladder. He was never easy to wash because he like to put his head up during a bath,  usually resulting in the bath-giver getting almost as wet as the horse.

But he had a good sense of his own size and he was never clumsy or awkward. He was also very good about standing still at the mounting block, or allowing his rider to get on from a fence post, a rock or whatever was handy. 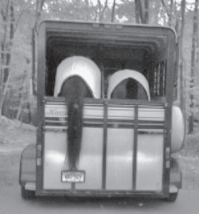 "He was probably the most sure-footed horse I ever rode," says Jean. To ride him, it was important to remember his extra long stride. "Once I took him to a double cross country event, and my friend, who is a very good eventer, was urging me to go faster on the course. But I knew his stride - he covers so much ground that you would think you had to go faster, but you really didn't. I actually hit the optimum time, and we came in first.

Jean says that for her, Dino was an all-around great horse, who was always very kind and never took advantage of his size. "You could put a little kid on him," she says. "He never bucked, he never reared, he never spun. He wasn't the fanciest horse in the world, or the most expensive. When I was showing, I had trainers who helped me who were very patient, because he was not like the typical warmbloods around here. But when he was good, he was really good. It was cool, because I love the Thoroughbreds, and we were always surrounded by warmbloods. It's nice to be different."

In 2007, Dino injured his stifle and and Jean retired him, sending him to stay with her friend, the trainer Sue Sisco, at her farm in Pennsylvania. It was Amish Country "and I think he had a heart attack when he saw his first cow." When Sue relocated to Aiken, Dino came with her and has lived here ever since at Sue's Sunfield Farm. Jean has three horses in Aiken and comes to visit regularly.

These days, Dino spends his days hanging out in the paddock with his friends. Although his serious riding days are behind him, Jean says she and Sue are planning to take him on an outing in the Hitchcock Woods this winter along with another retired show horse, just so he can enjoy the experience.

"He's been a great horse and he's so lovable," says Jean. "For me it was cool that he could do so many things. He doesn't owe me anything and he's an excellent baby sitter for other horses. He'll stay with Sue for the rest of his life. I believe when you have horses you are responsible for them, and you need to make sure they have a nice life. A lot of people don't recognize that, but for me, it's a priority. I think if you can afford to be out there showing, you can afford to take care of your horse when his career is over."

This article is copyrighted and first appeared in The Aiken Horse. It is reprinted here by permission.
Posted by Three Runs Plantation at Friday, February 05, 2016