Ride a line of jumps two ways to hone your eye and establish the correct pace and track.


By Anne Kursinski With Miranda Lorraine

In this exercise, you’ll ride the same line two ways, first as a straight line and then as a bending line. In both, the way you turn to the first fence is the most crucial part of the exercise because it’s in this turn that you establish your line, the guiding function of your eyes and the rhythm and pace to take you through successfully. Study the diagram and be sure you understand the line—the approach as well as the center section—for both variations. As long as you do understand, your correct position will enable you to use the other skills effectively; just by looking where you want to go, you’ll automatically signal to your body how much hand and leg it must apply to take you there.
Set a single low vertical—2 feet high or 18 inches if that makes you feel more comfortable—with ground rails on both sides. Place the fence about a third of the way down the middle of your working space. (Set all your fences this way for the following exercises so that they can be ridden in either direction. That gives you added variety without added effort.)

Set your second fence at a slight angle to the first, 72 feet away (measure the distance by walking directly from the center of the first fence to the center of the second). To help you understand the lines I want you to ride, use two cones or markers. Set one cone just inside where you’d need to turn in to ride a straight line that meets the centers of both fences on the diagonal; put a second cone halfway between the two fences just slightly to the right of the straight line.

Coming around your ring at a normal canter pace, turn so that your track takes you just to the outside of the first cone. Looking ahead, you’ll see a straight line across the middle of both fences (line A in the drawing) passing just to the inside of the second cone. If you find this line and maintain your normal canter pace, the distance between fences will ride as a smooth five strides.

Remember to keep your line straight, which means that you’re going to meet both fences in the center—but at a bit of an angle. 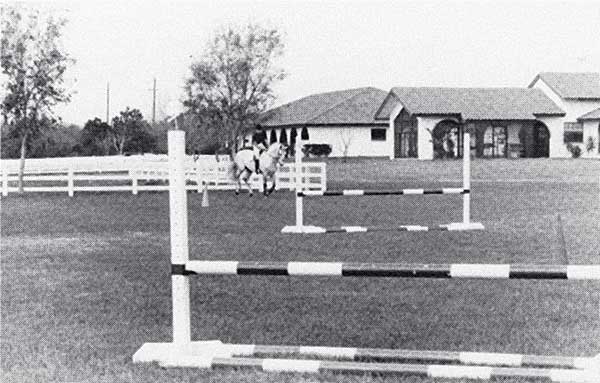 1: Cantering around the cone in the turn makes me see a straight line over the two fences, even though I'm riding to the first fence at a slight angle. Once I find my line, all I need to do is stay on it, maintaining my pace and rhythm. 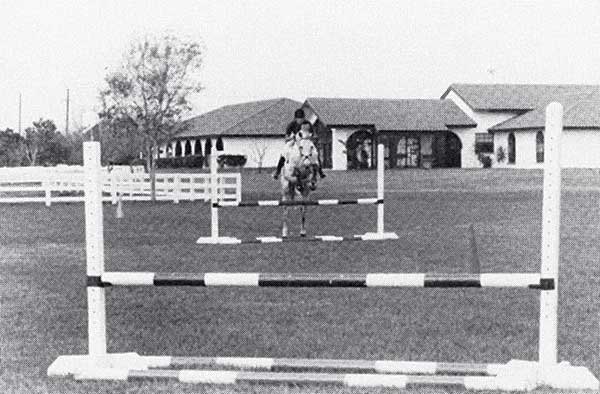 2: Over this fence my eyes are glued on the center stripe on the rail. A horse with an average 12-foot stride should easily get five strides in the 72-foot distance. 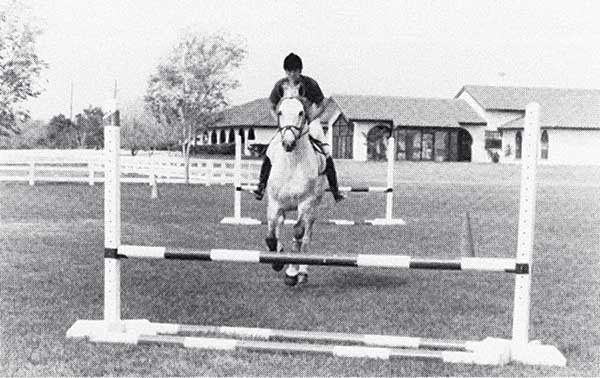 3: I have my straight line just inside the second cone, on my left. Riding around the outside of the first cone and inside the second has helped me keep my line. There's no need to steer because I made the line way back in the turn and I know the second fence will happen automatically.

Finish the exercise with a halt on a straight line, evaluate your ride and then repeat until jumping fences at an angle becomes fairly normal and you're consistent about meeting both fences in the center. Now ride the same two jumps as a bending line. At the same normal canter pace, make your turn to the first fence inside the first cone this time so that you meet the first fence at a 90-degree angle. From there, sight the center of the second fence and ride a bending line to it, passing to the outside of the second cone at about the halfway point. On this bending line, you should comfortably fit in six strides between fences if you maintain your rhythm and pace. Meet the second fence squarely and in the middle and halt on a straight line a few strides afterward. 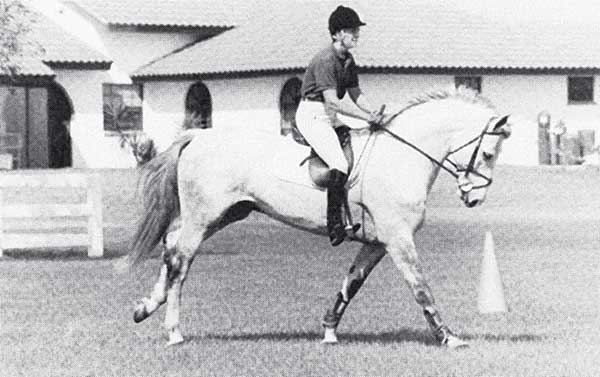 1: Way back in the turn - and this time I'm turning to the inside of the first cone - I'm looking straight at the first fence. I also check out where the second cone and second fence are in relation to the first fence. 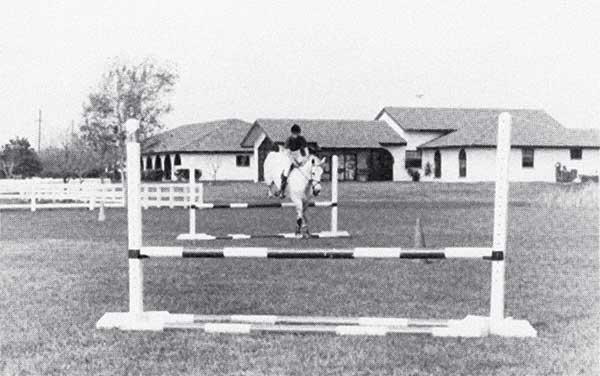 2: As I land from the first fence, I can see my line around the cone to the second fence. 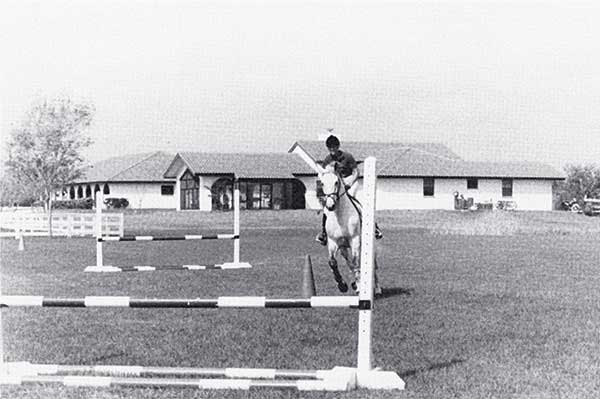 3: Riding around the cone automatically makes the bending line and it creates a straight line to the center of the second fence. Just as in riding a turn on the flat, if I look where I want to go, I'll get there. As always, I'm counting strides between the fences and as I near the fence I see the six is there. 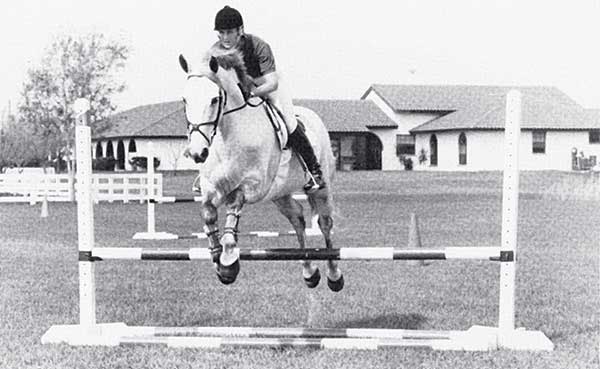 4: The six strides worked out perfectly, and now I hold my line to complete the exercise.

Once you're comfortable with the bending line and the six-stride distance between fences, ride it as a seven. You'll have to start with a shorter stride, which you'll have fully established by the time you make the turn to the first fence. Enlarge your bend just a little to be sure you have enough room for the seven. Again, concentrate on making the trip smooth and remember to learn a little something from each less-than-satisfactory try until you're consistent all the way down the line every time you ride it.

A five-time Olympian, three-time World Equestrian Games team member and two-time Olympic silver medalist, Anne Kursinski trained with legends such as George Morris and Jimmy Williams. In 1983, she was the first American rider to win the Grand Prix of Rome, aboard Livius. Four years later, aboard Starman, she was a part of three winning Nations Cup teams and became the second woman to win the Grand Prix of Aachen. In 1995, riding Dynamite, she won the American Gold Cup for a fourth time. In 1998, riding Eros, she was the first woman to win the $450,000 Pulsar Crown Grand Prix in Monterrey, Mexico. She trains and teaches out of her facility, Market Street, in New Jersey.


This article is copyrighted and first appeared in Practical Horseman. It is reprinted here by permission.