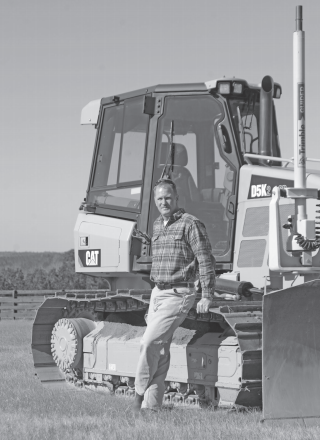 Shane Doyle has international aspirations. Better known in Aiken as the owner of Shane Doyle Farms LLC, an arena building and custom farming company, Shane also competes on the combined driving circuit. He drove his horse Coletto, a 14-year-old Oldenburg gelding, in the intermediate division at the Katydid CDE in November 2015 and plans to enter more competitions over the winter in Florida. He has another horse named Tokyo, a Selle Francais that was a ridden dressage horse until about two years ago. In the future, he would like to develop the two as a pair.

"Both are fantastic riding horses," he says. "And they need to be if you are going to be competitive. A lot of the upper level movements require an extensive amount of flatwork." To be able to compete a pair at the highest levels, you generally need a third horse to serve as an alternate, and Shane hopes to find one sometime soon.

"Horses are my passion," he continues. "I don't want to drive as a business; I consider it a lifelong learning process. My ultimate goal is to compete internationally, but I am taking it slow and not rushing things."

Shane was raised on a 165-acre farm in New Jersey that has been in his family for six generations, and so farming is in his blood. He started learning about growing hay and caring for the land when he was very young, and he grew up riding ponies and enjoying the country life. When he was 18, he changed direction, going into business for himself in the road and highway construction field. His company was involved in projects that included work on major highways and airports in the metropolitan New York area. Throughout his 20s and into his 30s, he developed an expertise in road building, learning all about drainage, site preparation and laser leveling.

"I was away from horses for a time," he says. "But then I started riding again, and eventually got into driving." His driving mentor is Jimmy Fairclough, who has competed a four-in-hand on the U.S combined driving team regularly since the early 1990s.

"Once I got back to horses, my business began to do more and more work on horse facilities, especially on riding arenas. Road building and arena building are really very similar - they have the same issues with grading, drainage, compaction and leveling. The more I did with horses on my own time, the more my business got drawn into the horse world too."

Shane's company has worked on horse facilities up and down the East Coast and as far west as Texas. He and his crew have created several first class dressage and jumping arenas in the Aiken area, where they have friends and enjoy spending time. They also currently have a project in North Carolina where they are working on a farm owned by Doug Payne, the upped level event rider.

The company has a small number of team members comprised of horse people who have a genuine and personal understanding of the equestrian world and long experience in construction. These include Shane's longtime associate Clint Bertalan, who has worked with him for over 20 years starting when the company was still focused on highway construction. Another one of his associates is Ryan Fairclough, whose father, Jimmy is Shane's driving mentor, and whose mother Robin is a Grand Prix showjumping rider.

"We own all our own equipment, so we have the ability to be very mobile," Shane says. "We can do the whole job from start to finish, so we are really a full service equestrian facilities planning and construction company."

For most of the year, Shane is based at his family farm in New Jersey. In addition to his work on horse facilities, he also grows and sells hay, farming a total of about 600 acres and harvesting 30,000 small square bales a year. This, a return to his farming roots, gives Shane a special appreciation of the earth, and how to help the grass grow.

"I remember my grandfather always referred to the soil as a bank account," he says. "He said you could not keep drawing from the bank account without replenishing it. At a certain point, your bank account will run dry if you don't make any deposits, in this case fertilizer, lime and organic material."

Shane brings his understanding of soil and turf to another type of riding facility that is becoming popular in Aiken, the grass turf arena or exercise area. This is a riding area that has been specially prepared to be level, with good drainage, consistent firmness, and durable grass footing.

"We start by removing the topsoil and laser grading the subsoil - we laser grade it just the way we would if we were preparing it for a new sand riding arena. Then we put the topsoil back evenly distributed, laser grade that; then we use a Bermuda high quality turf mix, similar to what you would see at a sod farm or a polo field. For a private facility that doesn't have as many horses on it as a commercial farm, the turf holds up fantastic."

In addition to being attractive and functional, a turf arena has the advantage of being more economical. To build a sand arena with professional footing, you need to truck in hundreds of tons of stone dust or gravel, which is not available in the Aiken area, and it gets expensive very quickly. Additives that are mixed into the sand arena can also have a big price tag. Shane estimates that his turf arenas cost about a third as much as sand arenas of a similar size.

"We're really excited about them," says Shane. "We're doing more of them every year. We think for the smaller farms where there are not 15 to 20 horses using the arena over the course of the day it's a nice alternative. You have to take care of it - you have to be sure you have irrigation, and treat it the way you would treat a quality lawn. We also encourage the owners not to ride in a specific area and create a track, but to vary the patterns of their riding."

As Shane explains it, a turf arena takes advantage of the natural drainage and sandy soil that has made Aiken a horseman's Mecca for generations. His company also offers consulting services for those who need help maintaining their riding areas, whether these have a grass or a sand surface. "It's not something we advertise, but it is something we do more and more of."

What does Shane enjoy about his work? The easiest answer for him is that he works so that he will be able to enjoy his horses, especially on the driving circuit. But his passion for combined driving and for his work seem to spring from the same love of horses and desire to excel and the same careful regard for the details that can make or break a performance, or mean the difference between a first class horse facility and an average one.

"In driving, the relationship you have with your horse is very important," he says. "I sometimes think, for those of us who drive, there has to be something extra, another type of connection, because we can't use our seat and our legs. Going cross country, there is very little margin for error in the obstacles, and you have to drive them just right. And with the distances in the marathon, you have to condition your horse just right, too."

And what drives him in his profession?

"I appreciate a beautiful property that has horses on it. It's very satisfying to add to its beauty. We're a small company, and because of that we're able to pay extra attention to details. Our goal isn't to be the big. We want to deliver high quality work and have repeat customers and continue to enjoy our relationship with them. It comes down to a lifestyle issue with us. We are driven by doing a good job, and we're passionate about what we do. I am fortunate to have people who work with me who have the same regard for horses. All of us that are involved with horses understand that details are very important. You have to get them right."

Learn more about Shane and his company on his website: www.shanedoylefarmingservices.com.

This article is copyrighted and first appeared in The Aiken Horse. It is reprinted here by permission.
Posted by Three Runs Plantation at Friday, January 29, 2016