Back to his Roots
by Pam Gleason, photography by Gary Knoll

For Rylee Zimmerman, the greatest thing about training horses is probably the mental aspect.

"It’s a creative process,” he says. “I like getting green horses and figuring out what it takes for each individual to succeed. It’s not just how you ride them. I ask myself, do I need a different piece of equipment, different feed or a different turn-out schedule? For each horse, you have to go back in your memory and draw on your experience to help you. I’ve found that the solution to most things is in my head.” 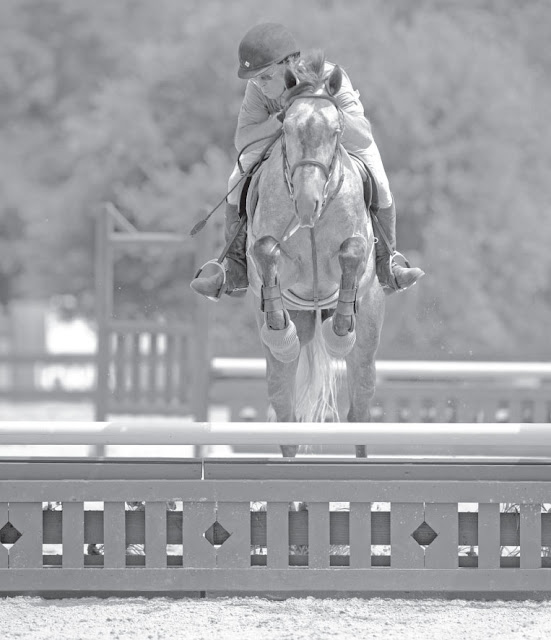 For Rylee, showing is also a passion, since it satisfies his love of competition. “I’ve always been very competitive,” he says. “I like to compete, and whether I am competing myself or someone I am teaching is the one in the ring, it’s all the same.”

Rylee, who is 37, has a horse training and sales business based in Aiken. He came to the city most recently from Camden, where he still owns property. Over the past two years, he has been quietly making a name for himself locally as a person who can help straighten out a horse that might not be performing up to his potential. He is also known for bringing along green horses and for his sympathetic touch with Thoroughbreds. In his spare time, he designs and builds show jumps: standards, flower boxes, gates and the like. Mostly, these jumps are for his own use so that he can expose his green horses to professional style jumps at home. However, he has sold a few of them to people who have seen them and wanted some of their own.

Although Rylee is focusing his attention on the hunter and jumper rings these days, he might be better known as a steeplechase rider and trainer, having competed on the national circuit for several years. But the horse show world is far from new to him: in fact, he grew up in it. For Rylee, showing and training hunters and jumpers is very much a return to his roots.

Rylee was riding professionally from the time he was a child. His parents, Mary and Richard Zimmerman, were in the show hunter business, and were particularly well known for their pony hunters. To get those ponies broken, trained and sold, the three Zimmerman children participated in the family business from as early as Rylee can remember. The kids did the riding and training, and they gave the ponies their first experiences in the show ring before they were sold on to new homes.

By the time Rylee entered high school, showing horses was second nature to him, but he admits it was a bit of a chore. He got more interested in other sports – wrestling and lacrosse, for instance. Then, when he was 15, he heard that trainers at a local track were offering $350 a week for someone to gallop racehorses.

“That was a lot of money for a kid in high school in the early 1990s,” he says. “I thought I could ride a horse, so I applied for the job and got it.” He would get up early in the morning, gallop horses, and then go on to school. When he turned 16, he went to Arlington racetrack and started working there. By the time he graduated from high school, he knew he wanted to pursue racing as a career.

“The racehorses seemed very exciting to me,” he says. His younger brother, Ramsey, also got into the racehorse world. Ramsey was small enough to make weight as a jockey, and is currently riding races in Florida. Rylee, a few inches taller, quickly realized that he couldn’t, and so instead he decided to be a trainer. After working under several top conditioners, he started his own business at Hawthorne Racecourse in Cicero, Il.

“We were successful, and won some good races” he says. “But it’s a tough business, especially if you’re just 21. There’s a lot of competition for clients, and if the guy one barn over has 40 years of experience, and you are just 21, he’s probably going to get them instead of you. The novelty wore off pretty quickly.”

After working at the track for a couple of years, Rylee gave his customers to his mother, who by now had also switched her focus from hunters to racehorses. Then he went to work for the Cornwall Hounds, a foxhunt in Stockton, Il.

“People had always been telling me that I should be a steeplechase jockey,” he says. “And then they had a point-to-point at the hunt. I rode in it and I won half the races, and I was hooked.”

Rylee’s mother made a call to Jonathan Sheppard, America’s all-time leading steeplechase trainer. “The next thing I knew, I was down in Camden working for Sheppard and learning how to be a steeplechase jockey. Four months later, I was riding professionally.”

Riding in steeplechases and point-to-points was exciting, and it was also very dangerous. During the season, Rylee would travel to one or two places every weekend and ride many, many different horses. “Just to survive a race was a thrill,” he says. “And I can’t even explain what winning one was like. It’s huge.”

Highlights of his career included wins at the Aiken meet, as well as at the Block House races in Tryon. Then there was racing at Saratoga, where he shared the jockey’s changing room with some of the most famous flat jockeys in the world. Low points were the accidents and the injuries. In 2007, he broke his back, separated his shoulder and fractured his pelvis in three different incidents . . .and in addition to all this, he suffered about half a dozen concussions. “I still had a really successful year,” he says. But he knew it was time for another change.

Fortunately, during the off-season from racing, he had been breaking young horses for a pin-hooker (a person who buys horses, trains them and sells them on), and he was offered a job traveling to England to sell exported American racehorses. He took advantage of this opportunity, and then got into business with a friend selling horse feed.

“The feed business was good for me,” he says. “I took about eight months off from riding. I was traveling around, delivering feed to different farms, and I saw people having fun showing hunters, and I got the feeling I wanted to do it again.”

He got a horse and started going to some shows. Once it got out that he was available to ride green and problem horses, the business started coming to him. Meanwhile, he sent for Go with Fate, a mare that he owned that had been a successful flat and steeplechase horse. Go with Fate had been a turned out in Illinois as a broodmare for seven years, but Rylee had faith in her. “I knew she was a great mover and I knew she could jump. So I brought her down and got her going and she started winning in the hunters. It got me to the horse shows and it got me seen. She really did me a favor.”

Rylee was soon working for top trainers in Camden such as Jack Towell and Gary Young. He also worked on his own riding, changing his position to conform to the equitation demanded of a show rider rather than a jockey. He had help, especially from Bob Russell, a former Grand Prix show jumping rider who gave him invaluable coaching and advice. (“You don’t do this business on your own,” says Rylee.) Two years ago, he came to Aiken to be with his partner, Rachel Cunningham, and he has never looked back. “Aiken is such a great horse community and there are so many opportunities here,” he says.

Today, Rylee has a few of his own horses that he is training and showing and will soon sell. He also gives lessons and has horses in training for clients from around the area. Although he loves to ride and train warmbloods, he has a particular reputation for getting the best out of Thoroughbreds.

“I’ve sat on 50,000 of them,” he says. “When you’ve ridden so many of them, you hop on one and you have ten that you remember that were so similar. You have this Rolodex of experience to fall back on. I am very relaxed and comfortable on them and there is nothing that a horse can really do to me that hasn’t happened before – it takes a lot to rattle me.

“My whole racing career, I was very good at getting the crazy ones and the strong ones to relax. I was always looking for a way to ride a horse so that he would relax. They don’t need to be dragging you around the racetrack. That’s not how they win races, and that’s not how you win in the hunter ring either. It’s hard to put into words exactly how I do it – it can be different things with different horses and they are all individuals. I do know that getting them to relax is the first step in figuring them out, and setting them on the path to a successful career.”