Who has “America’s Most Wanted Thoroughbred?” Katherine Gunter thinks that she might.

America’s Most Wanted Thoroughbred is a makeover contest for off-the-track racehorses that is being put on by the Retired Racehorse Project. Based in Maryland, RRP’s mission is to “increase demand for Thoroughbred ex-racehorses and build the bridges to second careers.” The contest itself is designed to showcase the trainability and versatility of former racehorses. Horses competing this year are required to have raced or been in race training any time between January 1, 2013 and December 31, 2014.

Candidate horses may not have had any training beyond the racetrack before the start of the competition, although they may have had as many as 15 training rides as of January 15, 2015. Over the months, the horses are being groomed for various disciplines, culminating in the Thoroughbred Makeover and National Symposium held October 23-25, 2015 at the Kentucky Horse Park in Lexington. There, they will compete for $100,000 worth of prizes and the honor of being named America’s Most Wanted Thoroughbred.

Katherine Gunter, who is the professional huntsman for the Aiken Hounds, had heard about the Retired Racehorse Project and she was intrigued. 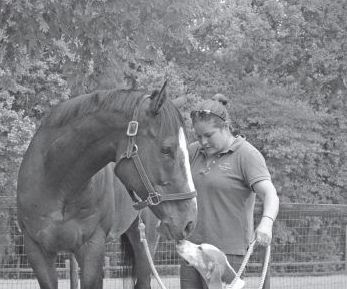 “I had been eyeballing the makeover stuff because I think it is kind of interesting,” she says. “And I needed another horse. My big horse is 20, the other one I have is 13. I love Thoroughbreds, and when they come right off the track, they are definitely in my price range.”

Over the winter, Katherine had another prospect, not a Thoroughbred, that wasn’t quite enough horse for her. When she sold that horse in Southern Pines, N.C., she happened to mention to the trainer there that she was interested in getting another horse.

“I told her I wanted to get one off the track and that I’m a bay gelding kind of girl. About two weeks later, she put a post on my Facebook page and said ‘Take a look at this horse. He’s still growing, so he’s still a little downhill, but I think he’ll even out.’”

The horse was a 5-year-old bay gelding, about 16.1 hands, with a solid build and a stout hind end. Katherine checked his bloodlines (“they were fantastic, with no Native Dancer crosses, which makes for a sounder horse, and his sire, Alluvial, was gorgeous;”) and she watched a short jog video of him. Although the video was in the snow (this was winter and he was training in West Virginia), she liked what she saw, and so she called his trainer, Eddy Clousten.

“There are only so many questions you can ask about a horse on the track,” she says. “So I asked ‘Does he need to be ponied to the track?’and the answer was ‘No.’ ‘Does he dump your exercise riders?’ The answer was ‘No.’ ‘Is he spooky?’ ‘No, not at all.’ ‘Are you negotiable on the price?’ ‘No. Not at all.’ So I said, ‘Okay I’ll wire you the money.’”

“I decided if I rode him once and he didn’t flatten me, I would send in my entry to the makeover,” says Katherine, noting that the $100 entry fee was a pretty modest investment. She planned to enter him as a foxhunter, one of ten disciplines that will be showcased at the symposium. He would have to learn to ride out with the hounds, to go quietly in company, to jump and to stand calmly at checks. He would have to accept traveling and going new places as a regular part of his job. Although Katherine is looking forward to the competition in Kentucky, she says her main goal is to develop a sold, well-rounded horse to be her hunting partner for many years to come.

As soon as he got to Aiken, Diablo showed that he had the right stuff. First off, he loved the hounds. Second, he was very quiet and easy to handle: you could pet him everywhere, pull his mane, clip his ears and his whiskers and he never batted an eye. He did have some things to learn, however.

“He didn’t know about horse cookies when I got him,” says Katherine. “I had to push them in his mouth and show him how to chew them. But now he’s a cookie hound.” And it’s true – when she says that he is an “inyour- pocket” kind of a horse, she is not exaggerating, especially if you are carrying treats in your pockets.

Diablo was so pleasant to deal with on the ground that Katherine wasted no time, getting on and riding him almost as soon as he arrived. On her first ride, she and her husband, John Dunbar, went out together in the Hitchcock Woods, accompanied by three of Katherine’s retired hunting hounds, Vampire, Maverick and Nipper.

“We went cruising. He was very quiet, with a good mouth and a really comfortable canter. He didn’t want to do anything bad – he was more inclined to slow down and stop than anything. So when we got back from that ride, I sent my entry into the makeover. I've been working with him ever since, and he has just been great.”

In Diablo’s career on the track, he raced a total of 20 times, earning three wins, four seconds and four thirds for total lifetime earnings of $31,970. His last race was in October 2014, but if Katherine hadn’t purchased him, he would have raced this winter as well. He even had racing plates on his feet when he arrived in Aiken.

Aside from some minor hoof issues (easily corrected by farriers from Rood and Riddle, who were in Aiken to tend to some other horses), Diablo has had no soundness or other issues. He entered his first competition, the Aiken Hounds Hunter Pace, in March (his team finished third) and got his first taste of actual foxhunting in Camden, where Katherine rode him up in front with the huntsman. He is a natural jumper, hopping over logs and cantering down to his fences with a steady, easy rhythm.

Katherine plans to continue his training this summer, using him for hound exercise and working on the basics. In September, she is going on a foxhunting trip, and plans to bring him in order to help expose him to new things and get him accustomed to going to new places. A few local horse shows are also a possibility. In addition, Katherine has ridden him in a stock saddle and is considering entering him in the competitive trail division as well as the foxhunting division.

“They encourage you to enter more than one discipline,” says Katherine. “The trail class includes a lot of footwork – you have to back through a keyhole, side pass over something, walk over a bridge, maybe a teeter-totter. All of that is good for getting a horse broke, and it’s good for foxhunting horses. After all, it’s just obedience.”

With all of this prep work, along with Diablo’s athleticism and calm, willing nature, Katherine thinks the trip to Kentucky will not faze her new horse at all. Although the exact format of the competition has yet to be published, the Masters of Foxhounds Association has agreed to run the foxhunting division, which will likely include a drag hunt and perhaps a small handy hunter course. 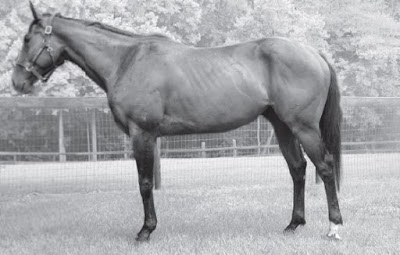 “We’re still working on the format of all the competitions,” says Kirsten Lagerquist, who is the director of the Retired Racehorse Project. “People with show organizing experience in each of the different disciplines will be helping us, and we expect to have a big update coming soon on our website.” So far, the event calls for a judged contest in each discipline, with the top three horses from each sport returning for the finale on Sunday afternoon.

“At that point, the competition becomes a little more subjective than just giving a horse a score,” continues Kirsten. “Popular vote will be incorporated into it as well.” In the past, the competition has counted input from the RRT website, but last year, one of the main deciding factors was an applause meter, which will probably be used again.

This is the third year of the America’s Most Wanted Thoroughbred competition, and the first that welcomed anyone who wanted to compete. The first two years, when the makeover was held at Pimlico racetrack in Baltimore, organizers invited about two dozen handselected professionals to enter. These included the two-time Olympic gold medalist Phillip Dutton, who cantered off with the top prize in 2014 aboard Graham and Anita Motion’s Icabad Crane, a stakes-winner turned event horse who finished third in the 2008 Preakness Stakes behind Big Brown. In 2015, when the event moved to a larger venue at the Kentucky Horse Park, the makeover was open to anyone with an eligible horse who got their entries in on time. The response has been overwhelming.

“We expected to see a slow trickle of applications and to end up with maybe 100 or 200 horses,” says Kirsten. “But we hit 300 horses back in March, so we closed things off by the first week in April and had to make a waiting list. We have about 345 horses entered right now, but we do expect to see some scratches.”

Entries have come in from juniors, amateurs and professionals from over 30 states and two Canadian provinces. There is even one entry from Great Britain: Louise Robson, who specializes in retraining former racehorses in dressage and works with former racers owned by HRH Queen Elizabeth. Louise will be coming over with a recently purchased gelding called Tinchy Ryder (“Ryan.”)

The makeover horses run the gamut from actual rescues to stakes winners obtained from some of the top racing outfits in America – Darley, Adena Springs, Phipps Stables. There is even million dollar winner (Eighttofasttocatch, who is being trained for eventing, dressage and showjumping). The most popular discipline is dressage with over 100 entries, followed by eventing and showjumping. Katherine and Diablo’s discipline, foxhunting, is one of the smallest, with just 17 entries. Some large racing stables have come on as sponsors, and several Thoroughbred rehoming organizations, such as CANTER and Turning For Home have become partners in the event.

Kirsten says that she is looking forward to the competition in October. “It’s going to be pretty amazing,” she says. The makeover competition is the featured event of the weekend, which also includes a trade fair, a series of seminars and a marketplace for retired racehorses – many horses entered in the competition are for sale, and Kirsten expects a good number to leave the Kentucky Horse Park with new owners. Admission to the preliminary competitions that weekend is free, but the finale on Sunday will cost $15.

“Buy your tickets now,” Kirsten advises. “There are only 1,500 seats, and we fully expect to be at capacity.”


For more information about the Retired Racehorse Project and America’s Most Wanted Thoroughbred, visit www.retiredracehorse.org. Or find them on Facebook. Follow Diablo’s progress on his Facebook page, Alluring Devil.