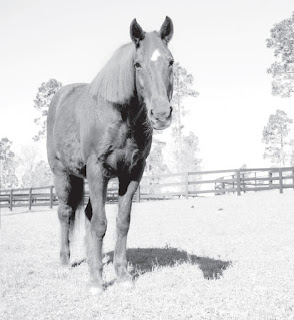 Brandy is a 21-year-old Missouri Fox Trotter, whose quiet demeanor does not imply that she is a wallflower. On the contrary, this chestnut mare has the courage of a lion and the résumé to back up such a statement.

Brandy has been a participant in Civil War battle reenactments, from Gettysburg to the Battle of Glorieta Pass in New Mexico. She has herded cattle on some of the biggest ranches in Colorado and Wyoming, and shepherded rowdy college students at stadiums before football games. She has walked ever so gently with a handicapped child on her back, and then later learned to fox hunt. If ever a horse could proclaim “Been there, done that,” it would be Brandy.

Brandy’s owner and partner in all of these adventures is Terry Guriel, a former brewmaster for Anheuser-Busch. Terry and his wife Joanne moved to Aiken from Colorado in November 2011, and their horses followed them a few months later. Although Brandy is now semi-retired, she still enjoys being ridden along the trails that are just outside her paddock at Three Runs Plantation. It is up to her if she canters or just walks along.

She is the “horse of a lifetime” for Terry, and the fact that he rode her for the first time in a round pen set up alongside the original Cabela’s sporting goods store in Kearney, Nebraska, sets the tone for their shared story.

“Brandy was bred and owned by a horsewoman in Iowa who was a long distance rider. The mare was for sale, so I requested a video – Iowa being just a bit too far from Colorado for a casual look,” laughed Terry. “I liked what I saw, so we arranged to meet halfway, which was in Kearney. When I rode her in that round pen we bonded instantly and even though she had only been taught the basics I just knew she was special.”

That afternoon, after the deal was sealed, Brandy headed to her new home in the foothills of the Rockies. The Guriel’s ranch was 40 acres and at close to 7,000 feet. They had some cattle, but mostly it was the fact that the couple could saddle their horses and ride to the high peaks from their backyard that made it the perfect place for them.

The Missouri Fox Trotter has long been appreciated for its stock horse abilities, stamina and smooth gaits. Brandy was the perfect example of the breed, and she loved working cattle. When he drove away from his job at Anheuser-Busch on a Friday afternoon, Terry would slip into cowboy mode. He would often work as a “Day Cowboy” for the big ranches in northern Colorado and Wyoming on weekends.

“Our day would start at 5 in the morning and not finish until 7 or later in the evening,” Terry recalled. “We would herd cattle across open spaces, down ravines – whatever the country threw at us. Brandy was so game and she seemed to really appreciate having a job, although she would be exhausted at the end of the day.”

Terry was also involved in the Larimer County Sheriff ’s Office for five years. The mounted patrol unit was called a posse, and Terry was a deputized member.

“There is nothing better at crowd control than a mounted officer,” he explained. “You have a bunch of rowdy kids who have had too much to drink and they think they’re going to show you who’s boss… you start moving in their direction and suddenly they see that your horse is so much bigger than they are. Sometimes they would jump up and down, wave their arms, try and throw bottles, and Brandy would just march straight into them. If that’s not bomb proof than I don’t know what is!”

“To see the smiles on their faces as they rode was so heartwarming,” explained Terry. “Some of the riders needed someone on each side of them, while others could just be led. Brandy knew that she was carrying precious cargo and she walked so gently.”

None of the above-mentioned jobs earned Brandy her surname of War Horse, however. That name she earned by participating in Civil War reenactments over a 16-year period, as well as “fighting” in a variety of Indian war reenactments.

What drives a grown man to become involved with reenactments? For Terry the answer is threefold. He is a fan of history, especially the cavalry; he has a huge interest in antique guns and saddles; and finally he enjoys a bit of time travel of sorts – reenacting allows him to place himself (and his horse) completely in another time period.

Brandy was Terry’s third reenactment horse; his first two did not see the fun of charging into battle with the sound of cannons surrounding them. Brandy, on the other hand, seemed to revel in all the action.

The largest battle that Terry and Brandy were involved in was the 150th anniversary of the Battle of Gettysburg in 2013.

“We didn’t actually fight on the real battlefield; that is a protected area now as a National Military Park,” explained Terry. “Reenactments are held in a field just west of the original battlefield.”

For the 150th anniversary, there were 10,000 infantry and over 500 cavalry used to reenact the battle that was known as the turning point of the Civil War.

“It was amazing to see that many horses in one place,” said Terry. “Column after column of horses… and then the charge. I was one of the cavalrymen carrying the Confederate flag and when the charge was sounded I had to peel off. You never allow your flag to be captured.”

Brandy never missed a beat, even in the heart of battle with cannons firing and black powder pistols going off all around her.

The question begs to be asked: how do you actually train a horse for battle? 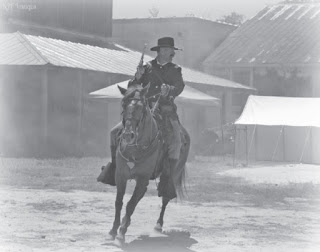 “Brandy just has the right temperament for reenactments,” explained Terry. “She trusts me completely and knows that I am not actually putting her in harm’s way. I trained her to accept the gunfire by giving her treats after each shot. The first time she heard a cannon she tensed like a spring, but that was all.”

“The most difficult part of a battle reenactment is the charge,” Terry said. “Horses will gallop with other horses beside them and behind them – but to ask them to run straight into a column of other horses is a different story. It’s against every instinct they have, and that is where trust plays a huge part. When I ask Brandy to charge I can sense her taking the measure of the horses coming at her. She is looking for that little bit of open space between two horses where she can pass safely.”

It is obviously not for the weak of heart!

Although the Battle of Gettysburg was the largest reenactment the pair have been in, they have also taken part in many battles throughout South Carolina and Georgia, including participating in the Battle of Aiken four times. When they lived in Colorado, they participated in the Battles of Socorro and Glorieta Pass, both Civil War battles fought in what would become New Mexico.

Life is definitely different now for Brandy and her best friend Sonnet, a 16-year-old Norwegian Fjord and Joanne’s riding horse. When they lived in Colorado they dealt with large snowfalls and had the winter off; in Aiken they have three grassy paddocks to mosey through and the Hitchcock Woods to ramble in when they want a change of scenery.

Perhaps when she is dozing in the corner of her paddock Brandy is recalling long runs behind the hounds when she was part of the Arapahoe Hunt (Colorado) and they chased down coyotes, or perhaps the gentler days of hunting in Aiken with Why Worry or Whiskey Road Foxhounds; perhaps she is remembering a long, tiring journey she made with Terry to the “Hole-in-the- Wall” – the famed Wyoming hideout of Butch Cassidy and the Sundance Kid; or fierce battle charges. Perhaps she is simply dozing, and content to be one of the happiest horses in Aiken.
Posted by Three Runs Plantation at Friday, July 10, 2015