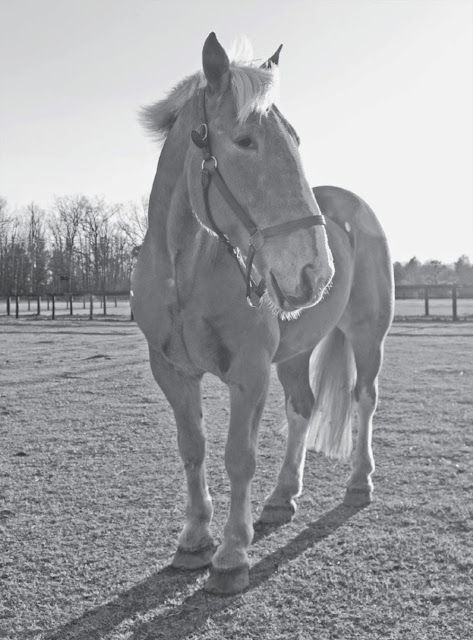 He could have been a model, this big toffee-colored horse. He has all the patience in the world for being groomed, clipped, braided, bathed, and when he sees a camera he poses. Tennessee’s real passion, however, is the world of the hunt, and his partner for two decades has been Betty Alexander.

“I got Tennessee when he was 2 and he was very difficult to break,” explained Betty. “I’m not sure what had happened before I got him, but he was frightened of having anyone on his back… of people with ball caps, and of spurs and whips. I just rode him very carefully, and eventually he learned to trust me and have fun.”

It is hard to imagine that this 17 hand gentle giant was ever anything but brave and willing and it is a testament to Betty’s skill as a horsewoman that he became the horse he is today.

“I always had Thoroughbreds, so the idea of owning a draft cross was quite foreign to me,” she said. “When my trainer showed him to me I wasn’t sure, but I had a friend who was 6’ 5” and 260 pounds and he never had a horse to ride, and I thought that perhaps Tennessee would fit the bill.”

There don’t seem to be too many stories of the friend riding Tennessee because it wasn’t long before the gelding had captured Betty’s heart.

Before she bought her farm in Aiken 10 years ago, Betty lived in Frederick, Maryland, and fox hunted regularly in her home state as well as in New Jersey and Virginia. She also was passionate about preserving the tradition of riding aside, so Tennessee learned all about side saddles as well.

Betty has had plenty of adventures with Tennessee over the years, but one of the highlights has to be their participation in George W. Bush’s 2001 Inaugural Parade.

“I rode in the parade as a member of ISSO – the International Side Saddle Organization – and there were 40 of us. We were wedged between the Mormon Tabernacle Choir and the Iditarod sled dogs. It was freezing and raining but Tennessee never flinched at a thing.”

Although perhaps nothing has come close to the memory of riding down Pennsylvania Avenue on her beloved horse, Betty has endless stories of Tennessee’s prowess in the hunt field and in the show ring.

“In Virginia he jumped all the big coops without hesitation and I always felt so secure on him,” recalled Betty. “Even though he is such a large horse, he kept up with all the Thoroughbreds when there was a run.”

As comfortable as he was in the hunt field, Tennessee had some quirky moves in the show ring. Early in his life he had been taught voice commands and at one big show there were three rings going at the same time. Betty was in a hack class, trying hard to listen to the announcer’s commands. Tennessee was listening as well – but to the announcer in a different ring: “Suddenly we started trotting when everyone else was cantering,” laughed Betty. “Then he would walk when the other riders were asked to trot!” It took me some time to realize what was going on.” Betty has boxes of ribbons that Tennessee has won, and she is proud of his local recognitions, including the 2014 Aiken Hounds Master’s Trophy and 2011 Why Worry Hounds Field Hunter of the Year award. 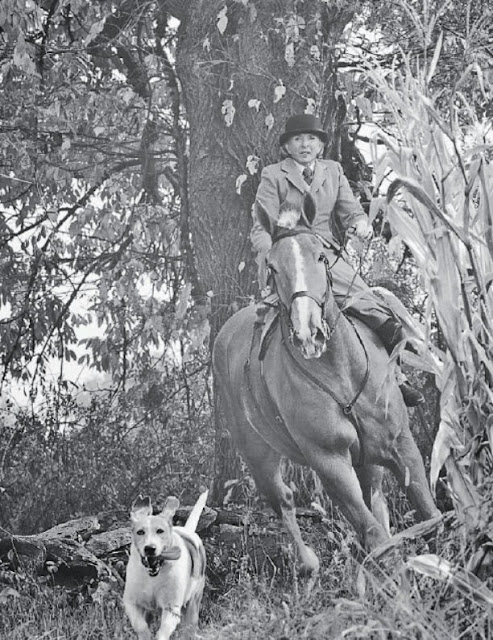 Although his resumé of hunt participation is excellent, perhaps Tennessee’s greatest legacy is his popularity with riders across the country.

“I have no doubt that well over 100 people have ridden him over the years, either because they were learning side saddle or they wanted to hunt on a safe horse,” Betty said.

Even though Tennessee is nearly 22 years old, he still hunts twice a week, going second field and sometimes hilltoppers. These days he is often hunted by Dr. Douglass Berry who calls the gelding his “cruising machine.”

“When Betty rides her other horse, Wyatt, I love taking Tennessee,” said Dr. Berry. “He is the best teacher and I am fairly new at hunting, so we are a good pair. His ability to calm other horses in the hunt field is amazing – it’s like he’s big brother to everyone. Because of his age it’s important for him to get a steady dose of aerobic exercise and hunting takes care of that. In the summer he is a schoolmaster for Aiken Ladies Aside. He just has to keep moving, and Betty makes sure he does.”

As with any older horse, diet is a big factor in his overall health. Tennessee gets fed orchard grass, Triple Crown Senior and alfalfa cubes. He also gets a glucosamine shot twice a month.

“I’ve thought of getting a younger horse, but I just can’t do that to Tennessee,” said Betty. “He would hate to be left behind – if that ever happened it would be the end. He is still an amazing horse. A few weeks ago we were hunting and he got stuck in a bog and was literally on his side. We got him out, continued hunting and the following day we won a hunter pace.”

Although she has a successful career in real estate and a happy marriage to Bob Alexander, she doesn’t hesitate to say that owning Tennessee is the best thing that ever happened to her.

“I would clone him if I could!”

Betty says that Tennessee’s prime years started when he was 5 and ended when he was 15, but the big horse doesn’t realize that he’s slowing down.

“I stopped jumping him three years ago but he seems content going second field,” Betty said. “He can still gallop fast and hear the hounds and that’s all that really matters to him.”

This article is copyrighted and first appeared in The Aiken Horse. It is reprinted here by permission.
Posted by Three Runs Plantation at Wednesday, May 20, 2015