Ride with the Wind: Mikki Fincher on Thoroughbreds 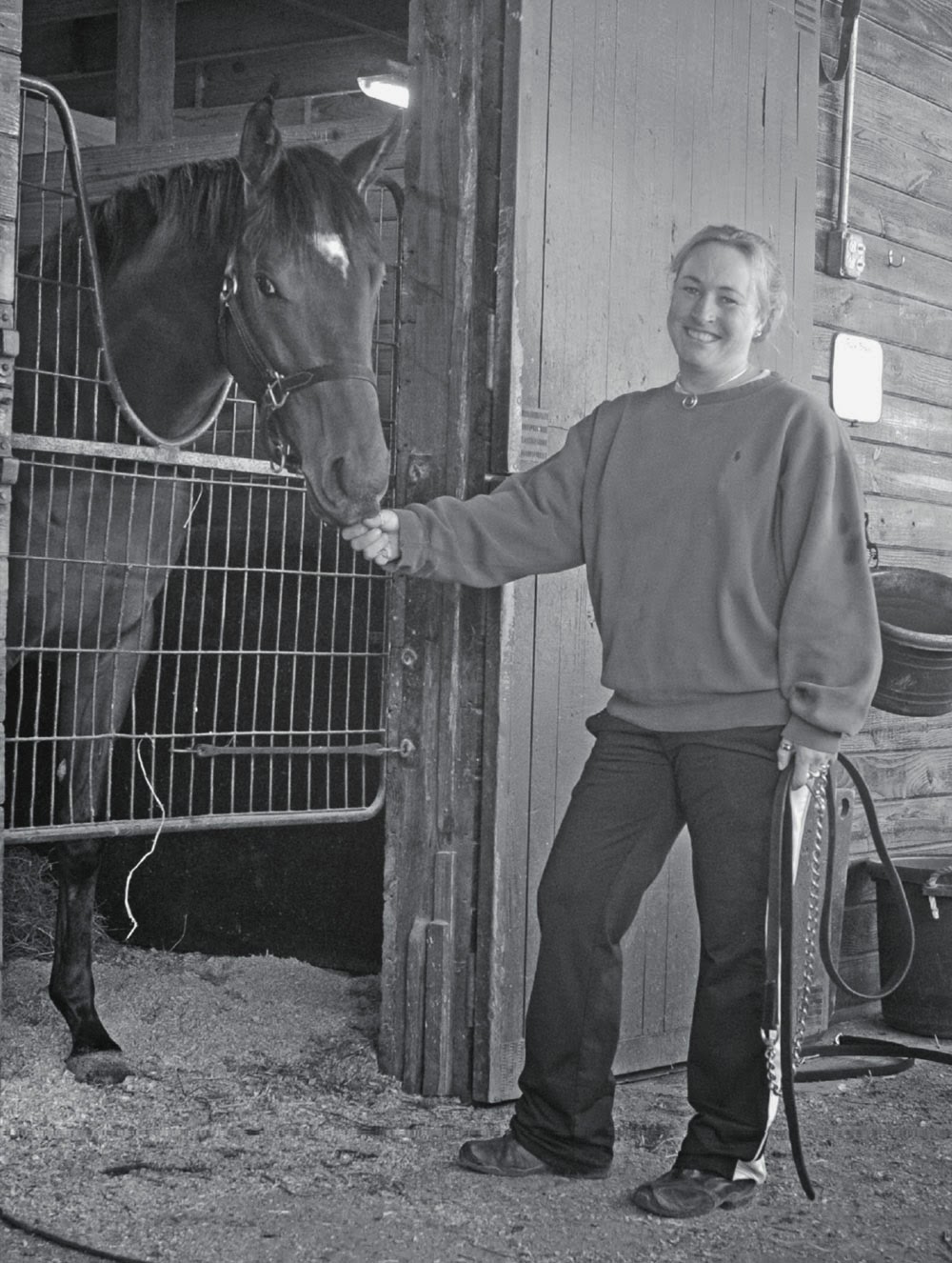 Mikki Fincher was 7 years old when she got her first pony and she immediately shortened her stirrups and pretended to be a jockey. That passion and focus has been the mainstay of her life, whether she was galloping a Kentucky Derby contender at Churchill Downs or jogging a 2-year-old in Aiken.

The lure of the racetrack was like a siren song to Mikki. When she was 17, she left her hometown of Bean Blossom, Indiana, to attend Hawkeye Hill Riding School in Commiskey, Indiana. The school was the brainchild of Lisa Thompson, a licensed trainer and jockey, who saw the need for a horse-savvy workforce for both the racetrack and the farm. Students learned riding, stable management and grooming. There was even a blacksmith course.

“It was really an expensive farm job!” said Mikki with a laugh. She graduated from the school with her trainer’s license. Hawkeye Hill was located about 50 miles north of Louisville, Ky. Students didn’t necessarily get jobs at Churchill Downs, that city’s signature track, but the school did provide lists of employment opportunities nationwide.

“My dream was to be a jockey, so I dutifully set about writing to the 150 trainers on my list,” Mikki recalled.

The second trainer to answer was Cary Frommer, whose operation was based in Aiken in the winter and Delaware Park in the summer. That sounded pretty good to Mikki and so at 18 she packed her car and headed south. It was the beginning of a relationship that has lasted on and off for 26 years.

“I galloped for Cary and her husband Tim for about a year, and when the stable moved to Delaware Park I went along,” she said. “I was deadset on riding races and did, starting when I was 19. Looking back, I really rushed into it and didn’t really do it the right way.”

While she was at Delaware Park that first year – 1989 – she met another Aiken-based trainer, Dolly Bostwick, who offered her several opportunities to ride races. She rode like crazy for the next couple of years, but decided to call it quits at the end of 1991.

Although she doesn’t go into details about why she walked away from race riding, the life of a jockey is tough – making the weight on race day (and Mikki readily admits that she is not the world’s tiniest person!), starting over again at each new track and facing stiff competition from more experienced riders.

What she didn’t walk away from was the racetrack. She still loved Thoroughbreds and the racing game so she figured out a way to make it her life.

“I was a good exercise rider and I was fortunate to work for some fabulous trainers,” she said.

“I worked for Todd Pletcher when he was just starting out and had eight horses. Many years later I was lucky enough to gallop English Channel for him.” English Channel won the Breeders’ Cup Turf in 2007 along with many of the top grass races in this country. He retired with over $5 million in earnings.

Mikki also worked for Al Stall, Jr.. Stall became known to the general public as the trainer of Blame, the horse that handed the great Zenyatta her only defeat in the 2010 Breeders’ Cup Classic at Churchill Downs. Five years before that race, Mikki was working at Churchill as Stall’s assistant and head exercise rider. A week or so before the 2005 Kentucky Derby, a California horse took one stall in their barn. The colt’s name was Greeley’s Galaxy. Trained by Warren Stute, Greeley’s Galaxy had earned his place in the Derby starting gate by winning the Illinois Derby. Stute had not brought an exercise rider with him, so Mikki got the assignment.

“To be galloping a Derby contender under the Twin Spires was a dream come true,” she said. Although Greeley’s Galaxy finished 11th in the Derby it was an experience that Mikki will never forget.

By this time Mikki had married a fellow horseman named Rhett Fincher. The couple would work at Churchill Downs in the spring, at the Fair Grounds Race Course in New Orleans in the winter, and during the gap months they travelled the country in their RV.

“We were true nomads. One summer we worked at Lone Star Park in Texas, then we would move on to Ruidoso Downs in New Mexico. Our goal was to reach Del Mar in Southern California – which we did. What a wonderful track!”

For 10 years Mikki and her husband galloped horses around the country. Somewhere along the line Rhett discovered a calling for natural horsemanship and left the track to become an instructor within the Parelli organization. Mikki felt the pull to return to Aiken, and did so in 2010.

“I for one am glad she came back,” said Cary Frommer. “Mikki is the most honest person I’ve ever known and that carries through with the work she does with the horses. It’s never just been a job for her, she truly loves the horses and is a terrific rider. I think she can out-breeze anyone in Aiken.”

For her part, Mikki is glad to be part of Cary’s stable.

“We have 20 horses in training this year and I probably ride (on average) seven a day. I love that we don’t rush the horses – we take our time walking back to the barn from the track and one day a week we have what we call a ‘Happy Day.’ On that day we may just hack along the dirt roads, or take some of the horses to the sand ring. Nothing is done in a hurry. We are a great team, a family really, and we all call Cary mom!”

One of the things that sets Mikki apart from some of the other riders at the track is the time she will spend speaking with people who congregate by the clocker’s stand in the mornings. Some are knowledgeable about what they are seeing, others not so much. If she is on a fairly calm horse, she will often walk over to the rail and answer their questions or let them pet the horse.

“I want people to really get into racing. If I can help them understand it a bit more and at the same time share my enthusiasm then it’s a winwin,” Mikki explained.

“I am all for her interaction with people – she’s the track’s ambassador,” said Cary. “It’s good for the horses as well.”

Although Mikki’s professional race riding was over years ago, she still gets to experience the thrill of victory at the Aiken Trials. Last year she won the City of Aiken Trophy aboard Dunbarton Stable’s Ascauga by nearly six lengths.

“To win the race for Bill Simpson, who loves the sport so much and has put so much into it, meant everything to me and the whole barn,” said Mikki. “We were all in floods of tears, but they were happy tears. That’s what this game does to you – there are highs and lows – but I don’t think I could do anything else.”

As she approaches 45, Mikki is honest with herself about how long she will continue riding: “I’ve had some bad spills lately and I’ve started to think about my future a bit more. For the past 27 years I’ve been galloping racehorses, but I have a lot left to offer. There are so many jobs in this sport, but it’s not a decision I need to make right now.”

Even when she’s out of the saddle, Mikki finds a way to surround herself with animals. The home she shares in Aiken with her mother, Agnes Unger, is also the residence of several dogs and cats, as well as a pair of black pot-bellied pigs who love Cheerios.

“I think I am so lucky to have lived my dream,” she said.

This article is copyrighted and first appeared in The Aiken Horse. It is reprinted here by permission.
Posted by Three Runs Plantation at Sunday, May 03, 2015