Story and photos by Meghan Benge 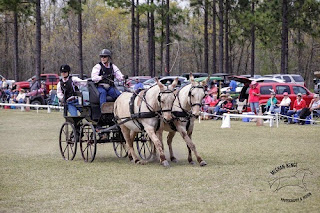 The winter driving season is winding down in Aiken with drivers contesting national championships at several venues. Amy Cross won the USEF National Pair Pony Championships at the CAI Live Oak International in Ocala, Florida, held March 18-22. Amy has been very successfully competing Wendy O’Brien’s Welsh Cobs this year with an eye on being selected for the FEI World Pony Championships in the fall.

The following weekend in Aiken, the Windsor Trace CDE hosted the American Driving Society’s National Championship for Very Small Equines. An increasingly popular division, Very Small Equines (VSE) are defined as any animal under 99cm by the American Driving Society. This is the second year that a championships has been held for the Preliminary and Intermediate levels. The Preliminary level was the best attended with a number of single, pair and four in hand turnouts. 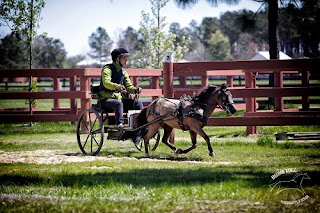 Judy Tintera came from Florida to win the Preliminary Single VSE division by 0.24 points over Eloise Nelson. Eloise won the marathon, but Judy's double clear cones and winning dressage score landed her in first. The four in hands of VSE’s were the crowd favorites to watch all weekend. In the end, Linda Willis won the championships with her team of black and white minis. Linda spends the winters in Aiken and summers in Pennsylvania. Sandy Rose, of Virginia, was Reserve Champion. Kim Allen and her mini, Fudge, won the Intermediate Single VSE. Kim and Fudge are from Windsor, SC. 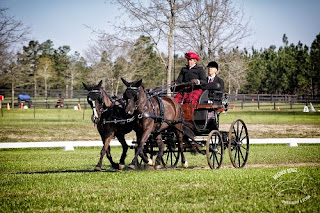 The Windsor Trace CDE also welcomed horses and ponies to the show. Sherri Dolan won the Preliminary Pair Pony division with her pair of black ponies, Smoke and Mirrors, by a wide margin.Sherri subsequently moved up to the Intermediate Level at the Southern Pines CDE at the Carolina Horse Park April 10-12, which she also won. Southern Pines was the host of the American Driving Society’s Intermediate level Championships, making Sherri the national pair pony champion for the Intermediate level.

The final driving derby at Katydid Farm also did not disappoint either. Spectators enjoyed beautiful weather and a tailgate party for the final of the series. Drivers qualified for the finals during the first three events held earlier in the year. The driving derby format attracts a variety of turnouts, with everything from VSE’s to a pair of mules competing in the final. Since the final was held on Easter afternoon, many of the drivers wore their “Easter best.” In the Training Division, Pat Gilbert won all the qualifiers she competed in, and did the same at the final with her VSE, Smokey. 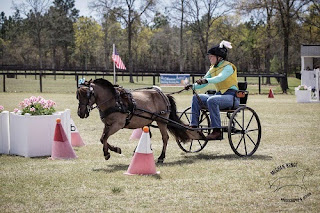 The Preliminary Single Pony division was won by Boo Fitch from Virginia with Irish Draught pony, Kiko, barely edging out Rebecca Gutierrez and Naria, a Haflinger. Boo was a member of the US Team that competed at the FEI World Championships for Paraequestrian Driving in 2014. Rebecca competed in her first FEI level event two weeks prior at CAI Live Oak International.


This article is copyrighted and first appeared in Equestrian Calendar Aiken. It is reprinted here by permission.