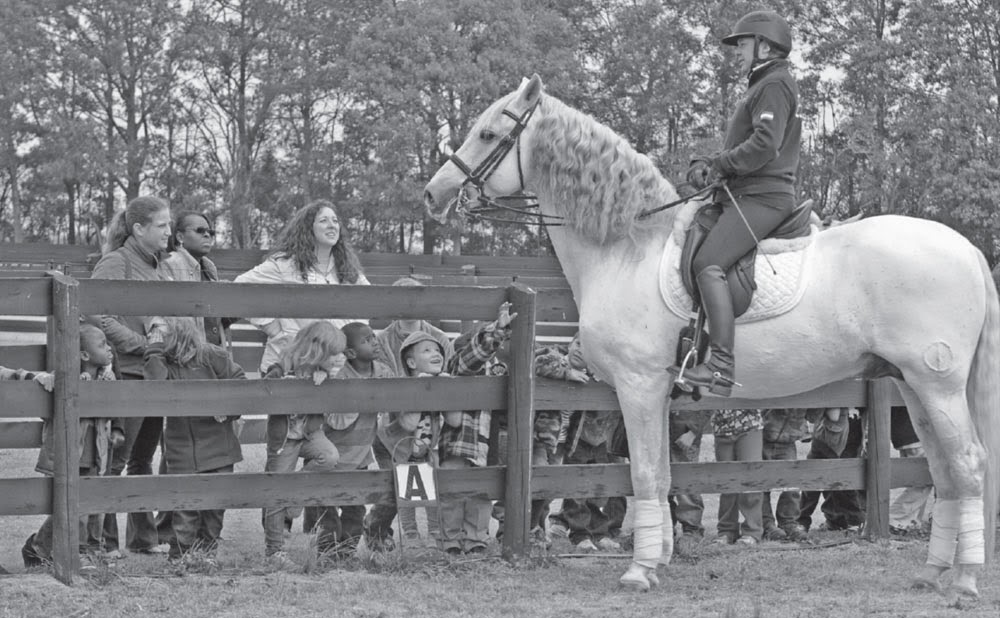 On November 13, about 80 children from the Cyril Busbee Elementary School in Wagener came to Half Moon Farm to watch a special dressage exhibition put on by Francisco Jose Garcia Ibanez. The children represented three classes of 5-year-old kindergarteners, and the trip was one of a series of educational events that introduced the children to different professions.

“We’re really excited to do this,” said Melissa Burke, one of the teachers. “The kids know about some other professions, like being a mailman, but most of them don’t know about being a horse trainer. There are so many horses in Wagener, but we don’t always think about it.”

Francisco demonstrated a Prix St. Georges test and a Grand Prix musical freestyle on two different P.R.E. (Andalusian) stallions. Afterwards, the children had a chance to meet some of the other horses on the farm and have their pictures taken with Francisco aboard Tomatillo VII, a qualified Grand Prix stallion who has won many championships both in the United States and in Spain.

Half Moon Farm, located in Wagener and owned by Dori and James Derr, specializes in dressage training as well as in Spanish horses. Francisco is a Specialist Master Rider from the Royal Andalusian School of Equestrian Art, located in Jerez la Frontera, Spain. This is a national school of horsemanship that accepts only the very best and most dedicated students. Francisco, who has been training and teaching in the U.S. for the past few years, is one of just a handful of instructors at the school. Horses and riders he has trained have gone on to represent Spain in international dressage competition. One of them, Oleaje (ridden by Ignacio Rambla) was on the silver-medal-winning Olympic dressage team in 2004.

Francisco was happy to perform for the children, and said he hoped that this introduction might inspire one of them to become a horse trainer some day. Francisco’s own daughter Maria goes to Busbee Elementary school, and last year was in Melissa Burke’s class.

More information about Half Moon Farm and Francisco Garcia Ibanez can be found at www.half-moon-dressage.com.


This article is copyrighted and first appeared in The Aiken Horse. It is reprinted here by permission.
Posted by Three Runs Plantation at Wednesday, February 25, 2015