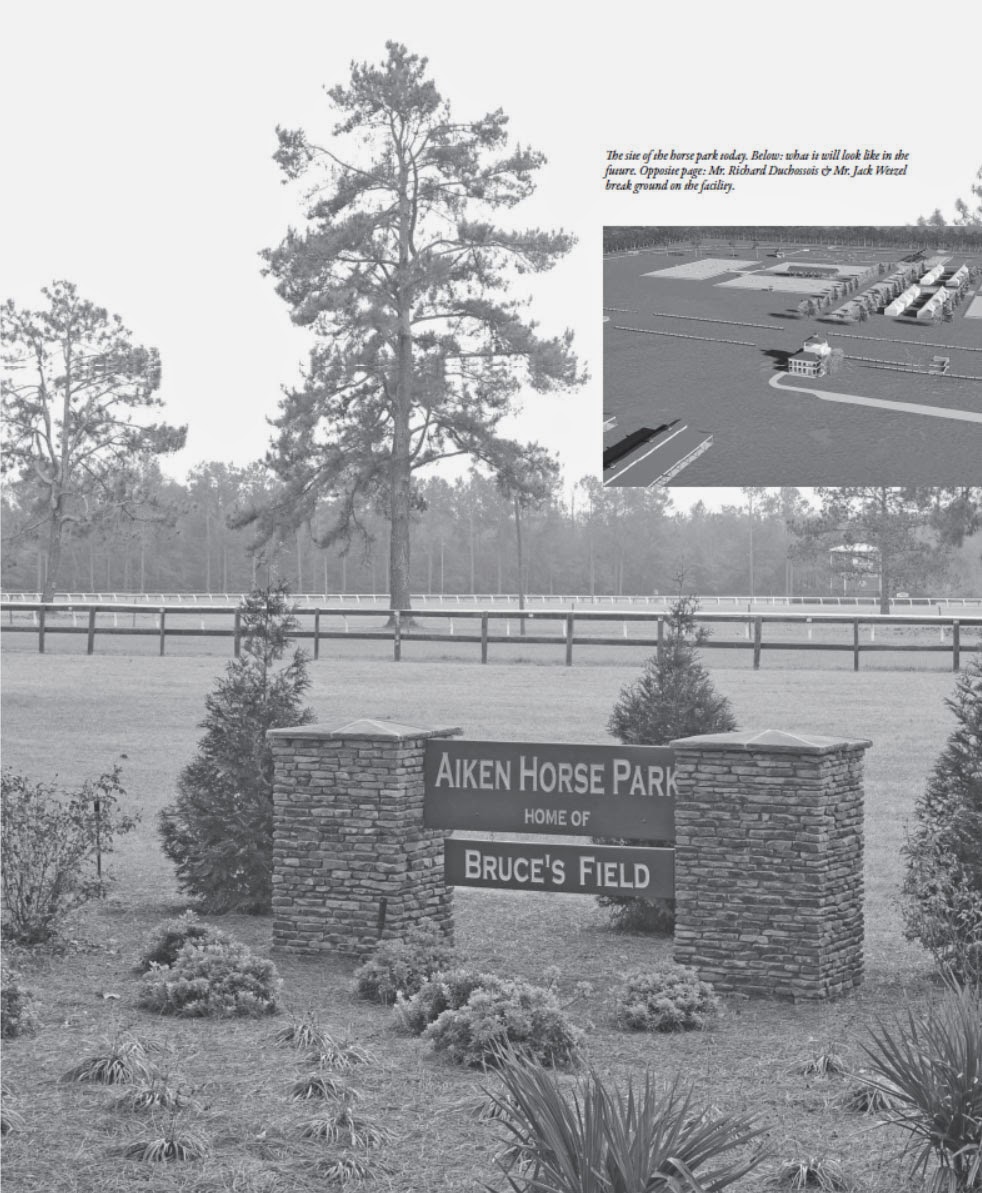 On Saturday, November 8, the Aiken Horse Park Foundation held a ceremonial groundbreaking for the new Aiken Horse Park, under construction this winter in Aiken's horse district. The Aiken Horse Park, called Bruce's Field, is located on 66 acres, formerly known as Ford Conger Field. This is the site of the twice-yearly Aiken Steeplechase. When completed, the park will feature five arenas with professional, all-weather footing, two grass jumping fields, viewing pavilions, an announcer's tower for the steeplechase and stabling for 300 horses. 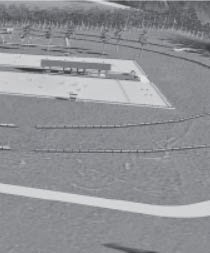 Over the last five years, there has been quite a lot of talk about building a horse park in Aiken.

Publicly, this talk focused on the idea of creating an immense multi-use facility on the outskirts of the town. This enterprise was envisioned as a public/private partnership, comprising about 1,000 acres capable of holding over 200 events per year and attracting about half a million visitors. Whether or not such an enterprise should be undertaken was the subject of much debate. The Aiken Chamber of Commerce was involved in the discussion, as was the University of South Carolina, which commissioned an $80,000 study (half of it paid for by an anonymous benefactor) on whether a horse park would be feasible for the area.

The results of the study, announced in 2012, were cautiously positive: yes a horse park would be feasible and had the potential to be a significant draw for tourists. No, it wasn't universally popular. In fact, many of the horse people surveyed had significant reservations about it. The cost to create such a large facility would also be extremely high and potentially burdensome. No one announced they would not pursue the project, but no one went ahead with it either.

While the public was debating the creation of a giant horse park outside of town, Bruce Duchossois was quietly working on plans for a smaller and more intimate horse park centrally located in the horse district. Bruce was a lifelong horseman who was passionate about horses, as well as about Aiken and its traditions. He and Jack Wetzel, a respected figure in the driving and coaching world, had bought Aiken's steeplechase field back in 2000 to save it from development. Bruce had always considered the field to be an ideal spot for a quality horse show facility. When Bruce was diagnosed with terminal cancer three years ago, he put his plans into high gear, creating the Aiken Horse Park Foundation and hand-picking the members of its board of directors. The foundation was formed in June 2013. In November of that year, Bruce and Jack donated the 66-acre field to it. The foundation is now registered as a 501c3 charitable organization.

There was no public announcement given at the time, but observant passerby may have noticed a sign bearing the words "Aiken Horse Park" that was put up on the field near the corner of Powderhouse and Audubon roads. People in Aiken with their ears to the ground suspected that something big was happening.

And it was. Over the next year, the new foundation's board of directors worked closely with Bruce to translate his vision into reality. Bruce died in June, but not before seeing and approving the plans for the new park. He was 64.

"We really want to stay true to Bruce's dream," says R Scot Evans, who is the secretary of the board of directors of the Aiken Horse Park Foundation. "It's all about bringing tradition back and staying true to the character of Aiken."

Bruce was an enthusiastic and successful amateur competitor in the show hunter ring, and the park is designed to be horse and rider friendly.

"He always talked about how much he enjoyed warming up on the same footing he competed on," says Scot. "There will be three working arenas, and so the other two, all with the same incredible drainage and footing, can be used as warm-up rings. We're leaving two grass fields, one is a Grand Prix jumping field and the other is for the hunter derby. We name it Bruce's Field, as a tribute to his passion and commitment, as we want to stay true to that concept, leaving some of it rolling and green."

Bruce was an extraordinarily generous supporter of many equestrian sports, including eventing and combined driving. He also donated unstintingly to rescue groups, such as Equine Rescue of Aiken, and he was very much interested in education.

"Education will be an important part of the park," says Scot. "Bruce wanted young people to learn about horses, and we expect to have educational events there. What Bruce wanted was for every equestrian, and even non equestrian, philanthropic group to feel like they could use it for gatherings of any kind but most of all to celebrate horses."

Immediate plans for the future include continuing the tradition of the spring and fall steeplechase. The Spring Steeplechase, called the Imperial Cup, is by all odds the largest spectator event in Aiken. It will take place on March 21 and will be held, as always, on the track. The inaugural horse show at the park, the Aiken Charity Horse Show, is planned for later in the spring, some time after the annual Aiken Spring Classic, held at Highfields Event Center.


"Once construction really begins, we will know more," says Scot. "But everyone tells us that there should be no problem completing the arenas on deadline."

The plans for Bruce's Field and The Aiken Horse Park have been met with enthusiasm and excitement in the horse community. Unlike the large horse park that was debated in previous years, Bruce's Field is seem to be absolutely in keeping with the spirit of Aiken, a welcome investment in the future of Aiken's horse sports and a continuation of a long tradition of investing in and giving back to the community. 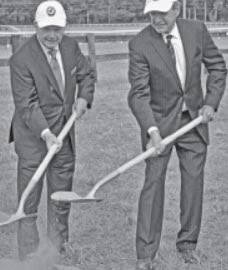 It is not just that the design is traditional, or that the park's location is so ideal (It sits across Audubon Road from the Aiken Training Track and across Powderhouse Road from Powderhouse Polo Fields.) It is also that the way the foundation is set up follows the same general concept that has traditionally preserved Aiken's equestrian life. This tradition started at the turn of the 20th century, when William C. Whitney deeded his polo field, racetrack and racing stable to the city of Aiken and established the Whitney Trust to oversee the property "for the institution and promotion of all kinds of sports and pastimes in the City." Bruce's Field, inspired by the love of horses and of sport, seems destined to join Whitney Field and the Hitchcock Woods as one of Aiken's iconic places, a place where those who love horses and the great traditions of horsemanship can pursue their passion and feel at home.

"This is the way Bruce wanted it to be," says Scot. "It's everything Bruce dreamed of, and beyond."

This article is copyrighted and first appeared in The Aiken Horse. It is reprinted here by permission.
Posted by Three Runs Plantation at Friday, January 30, 2015