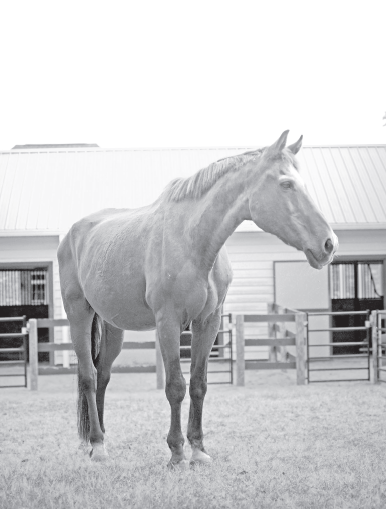 If Wazal ever had the inclination to brag about his life to his pasture-mates, he would start by saying that he was foreign born. Germany, of course, since he is a dressage horse. Then he would boast that he lived in several states before settling in Aiken. This Hanoverian gelding is 33 years old and has packed an incredible amount of travel and adventure into his long life.

These days he is the king of a small herd of mares (three) at Susan and Dave Bender's Sassy Hill Farm, which is located within the gently rolling hills of the Fox Hollow community.

Although his "girls" are all younger than he is, Wazal is definitely still in control, explained Susan. The horses almost always move as a unit, and if Wazal has found a particularly tasty patch of grass he may not head to the barn when Susan calls for them. In such a case, the mares will never leave him – they may move off for a few steps until they catch his attention, but they don’t go galloping in to be fed without him.

"I do think he might be losing his hearing a bit, but not too much else is wrong with him," said Susan. "He was recently diagnosed with Cushing's, but it’s very mild. He still has his teeth and his weight is good."

Like many senior horses, Wazal is graying around his muzzle and eyes, which lends an air of wisdom to his handsome face. The mares fall for the "old gentleman" routine on a regular basis. He has them all trained to scratch him wherever he has an annoying itch.

Wazal wasn't always such a laid-back sort of horse; in fact, the first six years of his life were definitely not the stuff of storybooks.

"I don't know every detail of his life before I bought him, but I do know the basic facts," Susan explained. "He came to this country at age 4 – completely untouched – and was sold to a teenaged girl who tried to do saddle seat with him. That didn't work out and he ended up being turned out in a field with a herd of cows and the man that owned him trained him with whips. It was not a good situation."

Susan purchased Wazal in 1987 when he was 6. She recalls that it was Halloween, perhaps an auspicious day to begin a long-term relationship!

Susan was living in Connecticut at the time and she says that she and Wazal made a huge impact at the stable where she rode.

"I began to notice that people would schedule their lessons before and after we would be in the ring. Wazal could be unpredictable so I thought they just wanted to stay clear and protect their horses. As it turned out – I later learned – they wanted to be free to watch us. He was like a stick of dynamite."

After the trauma of his early life, it's no wonder that Wazal was less than cooperative under tack. "He taught me so many things," Susan said, "but the most important was patience."

Susan's husband Dave was a colonel in the U.S. Army, and the couple moved with some frequency. After Connecticut, they were stationed at West Point, a place that holds fond memories for Susan.

"West Point has quite an equestrian tradition, so Wazal and I felt right at home," Susan said. "The cadets loved to groom him and it made me laugh because of course they did an incredible job. He was spit-polished!"

After three years at West Point, the Benders were sent to Turkey. The decision was made to leave Wazal in the United States, and he went to Florida to continue his dressage training.

"We were in Turkey for two years and during that time I rode show jumpers, but I flew to the states several times so that I could continue my training on Wazal," Susan recalled. 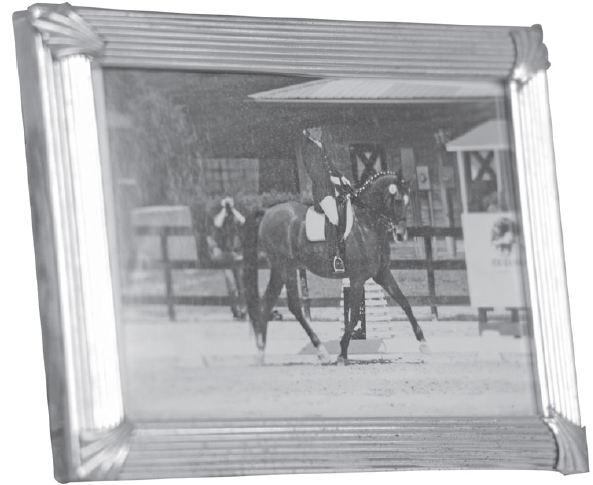 After Turkey, the Benders were sent to Montgomery, Alabama, and then to Fort Stewart near Savannah, Georgia (the largest military installation east of the Mississippi River). There were several elementary schools at the base and Wazal was popular with the youngsters, who occasionally got to feed him carrots.

"Wazal was more than just my dressage horse. He really helped build relationships within the military community. As fiery as he was in the ring, he was an absolute ham with people," Susan said.

By the late 1990s, Susan and Wazal were seasoned competitors, showing up and down the East Coast. They advanced from Training level to Prix St. Georges, but there would still be the occasional fireworks.

"He would often have one big explosion as we started our test, then go on to be brilliant. One judge (Dr. Max Gatewiller) said to me, 'This is a very opinionated horse.'"


Wazal finally began to settle down when he was 16, and the pair made huge strides. In 2000 Susan was awarded the prestigious silver medal by the United States Dressage Federation, a goal that was met after years of hard work and dedication.

"Wazal really loved dressage and his passage and piaffe were incredible, so very powerful. I think he could have done those movements all day long if I had asked him."

In March of 2001, Colonel Bender was in command of the 284th Base Support Battalion in Giessen, Germany. Susan had plans to ship Wazal to Germany to train with Conrad Schumacher, one of the world’s foremost dressage trainers. "It was to be Wazal's homecoming of sorts," said Susan. And then came September 11, and the world changed.

Wazal still came to Germany, but it was on a delayed schedule, and training sessions with Conrad Schumacher were now out of the question.

With army bases around the world on high alert, the time in Germany was difficult in many respects. Instead of her dreamt-of training and competing, Susan used Wazal in other ways.

"We lived in Butzback, which was very close to Giessen, and home to a large segment of the military. Our barn was in front of the army base and Wazal became a source of much interest for the German and American children who lived there."

The Benders returned to the United States in the summer of 2003 and a few years later, Colonel Bender retired from active duty and they made the move to Aiken.

"I already knew many of the dressage gals in Aiken – Holly Spencer and Amy McElroy especially – and my husband had been offered a job at SRS [the Savannah River Site], so it seemed to be the logical choice."

The horses made the change from being boarded to having their own home with multiple large pastures. Wazal has been completely retired for two years, and doesn’t seem to mind it at all when the other horses are ridden.

"I've owned Wazal for 27 years and he doesn't owe me a thing," said Susan. "As long as he stays happy and healthy I cant ask for anything more. He is enjoying his life."

Perhaps life at Sassy Hill is a bit quiet for a horse who once made a habit of two-hour lessons (just to prove who was right) and performing explosive dressage tests; and who, perhaps, should have earned some insignia of his own for living on so many army bases. But perhaps he has found, thanks to his loving owner, that the grass really is greener on this side of the fence.

This article is copyrighted and first appeared in The Aiken Horse. It is reprinted here by permission.
Posted by Three Runs Plantation at Friday, October 17, 2014