Coming Into Her Own


Christina Jason, a trainer of hunters and jumpers, has gained a quiet reputation in Aiken for recognizing and encouraging talent in a horse. Christina has taken hroses that other people have overlooked and turned them into happy and successful competitors. She is also a gifted and inspiring instructur, teaching riders of all ages and levels. Finally, she is successful in the show ring herself, piloting upper level horses around the Gran Prix and hunter derby rings with a cool professionalsim that gets the jab done. Her most recent success was at the Tryon Summer Classic in North Carolina, where she won the $15,000 Grand Prix aboard Kin and Jordan Irvan's Johnny Dublin.

Christina, who is 29, comes from Rochester, Mich. where she grew up riding and showing hunters. She heard that Daneial Geitner, a highly regarded professional based in Aiken, would soon have a job opening, so she called his wife Cathy and offered her services. The Geitners hired her and she came to Aiken to ride about three and a half years ago.

"I've always wanted to work for Daniel," she says. "And I loved it. There were lots of horses to ride and of course, I also got to show."

Christina stayed with Daniel for a year and a half, and then left to establish her own business, Southland Stables. Over the past few years, she has been steadily developing a following in Aiken, and her stable has grown to include her own personal competition horses, young prosepects, sales horses and horses she keeps for her clients. Initially, she worked out of other people's facilities. This spring, however, her business had outgrown that model, and it was time to find her own place. Today, Southland Stables occupies Dardo Iglestas's DI Polo barn at New Bridge Polo and Country Club.

"I love New Bridge," she says. "I think it's so calm and beautiful, and the horses are so relaxed here. To top it off, it's so close to everything - to town, to the horse shows. When I got the opportunity to come here, I took it right away."

New Bridge Polo and Country Club was originally created as a polo community, and it has some of the best fields and highest levels of play in the Siken area. It has evolved to be much more than that, however, attracting riders from many different disciplines. It is especially sought after in the winter months, when many upper level event riders come to Aiken to train. And there is little wonder. The development comprises over 860 acres of rolling hills, fields and pine woods. It is tranquil and understated with an air of elegance.

"We have access to all the trails," says Christina. "And there are a lot of them. You can ride on them for hours - they go all around the development and along the edge of the polo fields."

In addition, the new Southland Stables facility has a confortable barn with large stalls, seven grassy, shaded paddocks and a jump field with a full set of schooling jumps. It is a peaceful place, perfect for putting a horse at ease.

The new facility will allow Christina to push her business to the next level, and she says  she has room for more boarders and horses in training. What she is really excited about, however, are her sales horses. With her growing reputation, she already has clients around the region, as well as a few investors who have bought green horses for her to train and sell.

"That's what I love," she says. "I like to see their progress, to start them from absolutely nothing, and see them blossom. Then I love showing them and seeing them become something for someone. I love to hear from their owners later to find out how they are doing." 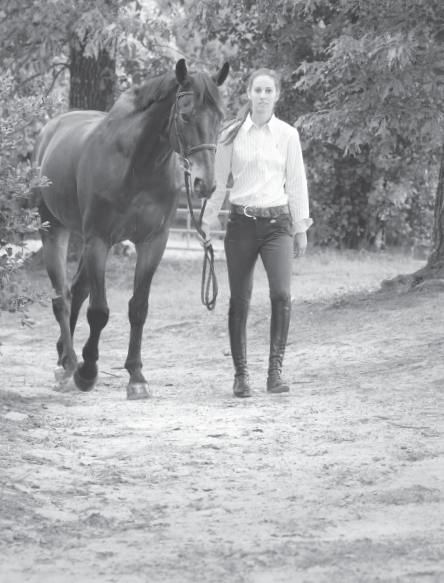 Like any ambitious trainer, Christina says that she would love to get more quality, well-bred warmbloods that have the potential to become Grand Prix and hunter derby horses. Unlike many other trainers in her discipline, however, she says she also enjoys working with Thoroughbreds and horses from rescue situations. Right now she has an off-the-track-Thoroughbred from Equine Rescue of Aiken.

"I have quite a few Thoroughbreds," she says. "More than maybe an average hunter/jumper trainer might have. I get them in, and I usually have to put some weight on them, and then I make them up and show them and sell them, as either hunters or jumpers."

What about her reuptation for uncovering diamonds in the rough?

"A lot of times I will get a horse in that someone had trouble with, and it will just be because he wasn't getting something he needed - say more turnout. There have been some that were difficult at first, but they've all come around. I do like to find horses that are different, or that maybe wouldn't have a good future, and fix them up and sell them into good homes."

And so far, she has been very successful. In fact, Christina says that she can't think of a horse that she has trained taht did not find a home where it is appreaciated. Sometimes finding that home simply means putting the horse in the right situation for him.

"Anything I've trained has gone on to have a job. I think every horse can do something in life that will make him happy and make his owner happy. I try to find that thing and help him become the horse he wants to be. I think that for every horse, there is someone out there that will be happy to own him."

In the future, Christina looks forward to building her business, bringing in more clients and boarders, adn training more sales horses. Most of all, perhaps, she looks forward to showing, which she says she loves. She does have some upper level horses to ride at the bigger shows. These include the Irvan's Grand Prix horse Johnny Dublin as well as her own Grand Prix mount, Tamino. Tamino is an aged warmblood who knows his way around the jumper ring.

"Tamino is amazing," she says. "He's exactly my ride. I bought him from Vicky Miller from Tennessee in 2011 and we've been showing ever since. If I could clone hime I would." Then she laughs, maybe realizing that this idea is not a far-fetched as it used to be. "If I win the lottery, I'm going to clone him. I love him."


This article is copyrighted and first appeared on the Aiken Equestrian Calendar of Aiken website.  It is reprinted here by permission.