Northern Kid is the grandson of the great Northern Dancer, legendary sire and superb racehorse. Although the subject of this "Secret Lives" never ran a race, his regal bloodlines certainly helped him in the world of three-day eventing.

Northern Kid is now 25 and living out his retirement years at his owner Wendy Southam's farm in Aiken. He shares his paddock with several other retirees, but he is easy to spot. Standing 15.2 hands, he is smaller than his pasture mates and has a habit of walking under their necks, as though to emphasize their difference in size. But being small was not a problem for Northern Kid when he was competing, any more than it was for his grandsire. The great Northern Dancer was a mere 15.1 hands, and there was rarely an article written about the racehorse that didn't mention his small stature. That didn't stop him from winning!

Northern Kid began his days in Canada, although Wendy doesn't know about his life before his 2-year-old year. In 1990, he friend Edie Tarves, who was a member of the Canadian eventing team at the 1984 Olympics in Los Angeles, had found him at a 2-years-olds in training sale at Woodbine in Toronto.

"Edie was thinking of becoming a Thoroughbred trainer back then," explains Wendy. "She spotted him at the sale and though he'd make a nice runner."

As it turned out, Edie decided against a life on the racetrack, and she ended up training
Northern Kid as an event horse.

"He had the worst name ever for a racehorse - Wards Semi Truck! It just doesn't sound like the name of a winner," says Wendy with a laugh.

In a nod to his famous grandsire, the gelding was renamed Northern Kid, and with Edie's expertise he advanced up to the Training level. Wendy purchased him when he was 5 and the pair have been together ever since. 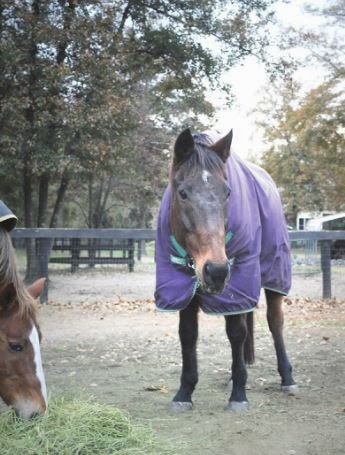 "I lived fulltime in Ontario back then and, of course, the eventing season was shorter due to the weather. Northern Kid and I probably went to about 15 shows a year, starting in April and ending in October," says Wendy. "My favorite competition by far was the three day event at the Kentucky Horse Park called the Midsouth Three Day CCI. It was (and still is) the full format, with steeplechase and roads and tracks."

The pair competed at the Midsouth event three consecutive years - from 1998 until 2000 - and finished in the top ten each year. Northern Kid was in his element with all the galloping and jumping, according to Wendy. "We never had a time fault and he did everything with his ears pricked."

Northern Dancer had won the Kentucky Derby in 1964 (along with five other major stakes during his 3-year-old year), never letting his size get in the way of a winner's circle photo. His grandson Northern Kid didn't realize he was smaller than his competition either, and Wendy loves to recall his bounding through the water jumps and gleefully galloping around the cross country course - so much more fun than training at Woodbine.

Like most horses who love the cross country phase of three day eventing. Northern Kid put up with dressage, but wasn't thrilled with the assignment.

"He was obedient and did everything I asked of him, but he simply wasn't a great mover," says Wendy. "He shone at cross country and was a clean show jumper - we never had a rail go down."

Northern Kid has a small navicular problem, but his farrier used 2-degree pads on him while he was competing, which kept him comfortable.

Wendy started coming to Aiken in 2002 with Ian Roberts, the Canadian coach. Although she was still competing Northern Kid, her star horse then was a gray mare named Ruba Z. Ruba Z was an amazing jumper, and in 2006 Wendy was named the United States Eventing Association Advanced Mast Amateur Rider. The pair qualified to be on the Canadian team for 2008 Summer Olympics in Beijing, but Ruba Z sustained an injury and was withdrawn.

In 2007, Wendy and her husband Bill moved to Aiken on a permanent basis.

"The horses shipped down in August and they really thought we had moved them to hell!" says Wendy. "They had been here before, but during the winter months, so the summer was completely different. That particular summer was one of the hottest on record and they were not happy." 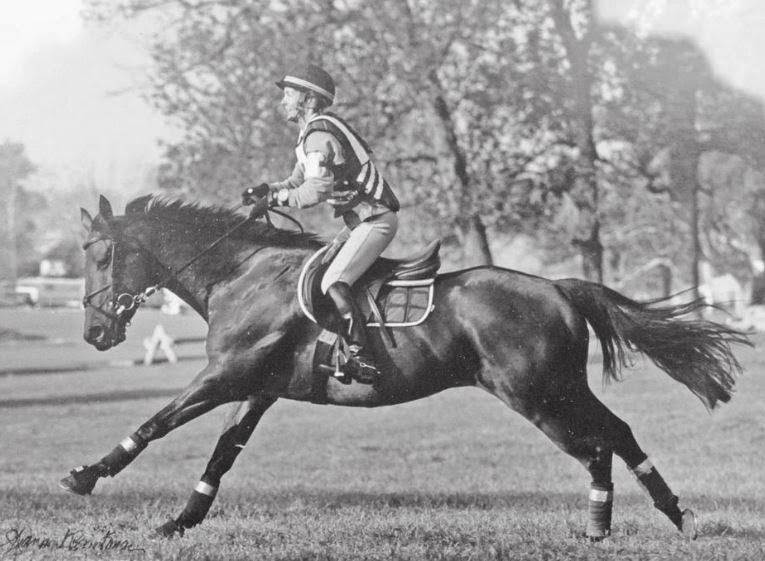 Wendy had decided to commercially ship two of the older horses to Aiken, Northern Kid and his buddy Barney." There were cameras in the back and the driver told us that for the entire 18 hours of the van ride all Northern Kid did was stare at Barney. He never moved and didn't drink or eat one mouthful of hay. He was obviously feeling very insecure and probably thought that if he looked away then Barney might disappear!"

Although he was completely retired once Wendy had mode the move to Aiken, Northern Kid took up a new role as the boss of his own small herd of retirees.

"He is very sweet and friendly horse, but don't ever leave him in the barned alone - he will bolt out of the stall in a minute," says Wendy. "He needs to know what's going on at all times and I would say that he is the most social of all the horses at the farm."

Like most retired stars, Northern Kid has his entourage. The equine dentist Lou Heffner plays an important role, as does the farrier Darren Haeusler.

"Darren practically sits on the ground when he does Northern Kid's feet," Wendy says. "He is well aware that the old boy has some arthritis easier for the horse."

Wendy says that rice bran is the not-so-secret ingredient in Northern Kid's diet that keeps him looking good, but that overall he's never met a meal that he didn't like.

"I am fortunate that he loves to eat and is really an easy keeper," she says. "I've blanketed him a bit earlier than normal this year but that's about the only change in his routine."

"This horse gave me a good start in eventing and he deserves a nice life now," Wendy continues. "From going Preliminary in Ontario to those."

This article is copyrighted and first appeared in The Aiken Horse. It is reprinted here by permission.
Posted by Three Runs Plantation at Friday, February 07, 2014