Home for the Holidays

There are close to 180 Thoroughbreds in training at the Aiken Training Track this winter, yet there is one horse that stands out from the crowd. Dogwood Stable's Palace Malice, winner of the 2013 Belmont Stakes, has been in Aiken since November 8, having a working vacation before he ships to Florida at the beginning of January. Perhaps it is the Belmont Stakes saddle towel that gives him away, or the lead pony that accompanies him to the track each morning. Chances are, however, it is the railside crowd that is present for his thrice-weekly gallops.

"We made the decision over the summer to bring Palace Malice back to Aiken after the Breeders' Cup," explains Cot Campbell, the President of Dogwood Stable. "I loved the idea of having him here for a couple of months and it certainly brightens up the winter.

"Palace Malice is a throwback to those tough runners of the past who ran often and ran hard - and then they were taken to winter quarters to get a break," Mr. Campbell continues, "Our trainer here in Aiken - Brad Stauffer - has been terrific in seeing to it that Palace Malice enjoys his life."

The colt spends time in his own round pen, where he gets to buck and play: is grazed in the afternoons; and heads to the track for some easy gallops three mornings a week.

"In mid-December we'll pick up the tempo and he'll train six days a week," says Campbell. "He'll have a serious workout around January 5 and then ship to trainer Todd Pletcher in Florida on January 8."

Besides Campbell, who visits Palace Malice every day, the colt's Aiken entourage includes Brad Stauffer and Ron Stevens from Legacy Stable, his groom, Daniel Negrete, his exercise rider Gene Tucker, and Mike and Kari Schneider, who are part-owners of the colt and live close by in Three Runs Plantation.

"It's obviously been great having him in the barn," Stauffer says. "For me personally it has been a very healing time. Palace Malice has been a balm of sorts - after the Legacy barn burned down in August, life seemed to be all about the fire. Now that event has been pushed aside and all anyone wants to talk about is this great horse who is in town, and I really appreciate being able to turn the page to a new chapter."

Stauffer says that life with Palace Malice is a little like having Elvis in the room. "Women of all ages hang over the fence and practically swoon," Stauffer laughs. "This horse knows that people are there to see him and he poses for photos and loves being fed peppermints." 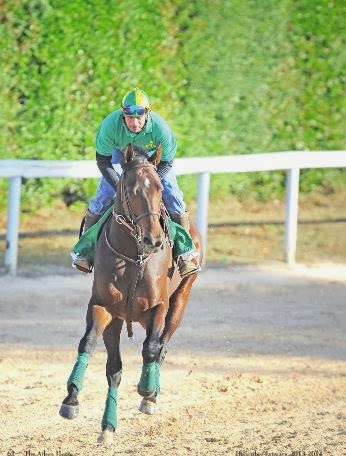 Gene Tucker, Palace Malice's exercise rider, says that life is "surreal" these days, and he is enjoying each and every ride, knowing that life goes back to normal once Palace Malice leaves Aiken.

"I've been riding racehorses for more than 20 years and this is the highlight of my professional life," Tucker says. "I was fortunate to gallop Dogwood's champion filly Storm Song when she was in Aiken back in the 1990s, and to have another opportunity to ride a horse of that caliber is truly thrilling."

Tucker says that Palace Malice is an easy horse to ride and is very professional, yet he knows he is sitting on something very special.

"This horse is total class. He knows what he has to do each time we go to the track. I can feel him puff up when we go by all the people who are standing along the rail. It's like he says to himself - 'I'm the man and I know it!'"

"The year was wonderful, but I have to say that if Palace Malice had been as lucky as he was good, then he would have won two or three more races," he says. "The highlight, of course, was his victory in the $1 million Belmont Stakes on June 8. The Belmont is one of the greatest sporting events in America and the race is a superb test of both speed and stamina. Man o' War, Gallant Fox, Whirlaway, Native Dancer, Secretariat, Seattle Slew and Affirmed all won the Belmont Stakes, and to have Palace Malice's name included in that long list of winners means the world to me and to his partners."

Campbell says another of the year's highlights was heading to his beloved Saratoga with a horse who was a prime candidate to win the Travers Stakes, which is known as the summer Derby.

"Anyone who knows me (or is familiar with the Dogwood Stable newsletter) knows that Saratoga is one of my favorite places in the world," continues Campbell. "It was beyond thrilling to travel there in July and having the town abuzz with talk about our colt."

Palace Malice did not disappoint; he followed up his Belmont win with a commanding victory in the $600,000 Jim Dandy Stakes at Saratoga Race Course on July 27. The Travers Stakes on August 24 seemed to be his for the taking, but one should never trust the racing gods. After stumbling at the start and loitering at the back of the field, Palace Malice made a gallant run down the stretch to finish fourth, and a mere length was all that separated the top four finishers.

Palace Malice ran at Belmont Park on September 27 in another million-dollar race - the Jockey Club Gold Cup Invitational. The Dogwood runner was second to the 6-year-old Ron the Greek, who literally run away from the field to win by more than six lengths. Palace Malice was nearly three lengths in front of the remaining runners.

The $5 million Breeders' Club Classic at Santa Anita on November 2 was Palace Malice's final race of the year. By now the outcome has been rehashed a thousand times - an unfortunate jockey switch (John Velazquez had been injured earlier in the day), a bad break and a wide run all played against Palace Malice on that California afternoon. The colt finished sixth - a disappointing ending to what had been a successful year. With $1,481,135 in purse earnings from 12 lifetime starts (threes wins, fours seconds, and a third), Palace Malice has definitely paid back his $200,000 purchase price from Keeneland's 2-year-olds in training sale in April of 2012.

And what will 2014 hold for this striking bay son of Curlin? In some respects Palace Malice will be following in his sire's hoofprints. Curlin, twice named Horse of the Year, won four major races in his 4-year-old year: the Dubai World Cup, the Stephen Foster at Churchill Downs, the Woodward at Saratoga, and the Jockey Club Gold Cup at Belmont Park.

Cot Campbell will take aim at two of those races, and add a few more to the schedule as well.

"Although it's tempting to go to Dubai for the $10 million World Cup (the world's richest horse race) on March 29, we have decided to stay here where there are so many opportunities, and we don't have to ship halfway around the world." 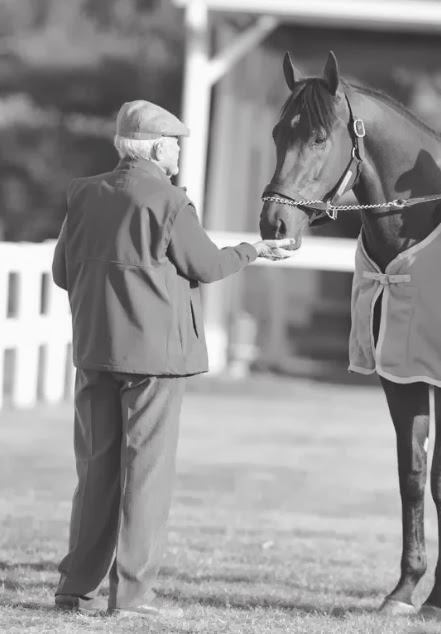 Instead, Palace Malice's first race of 2014 will be the $400,000 New Orleans Handicap on March 29. "The timing of the race is perfect in that it will give Todd Pletcher ample time to tighten our horse up," says Campbell.

There are two major stakes at Saratoga that Campbell has added to his wish list (the Whitney and Woodward) and then a repeat performance in the Jockey Club Gold Cup. If all goes according to plan, the colt will finish the year with a return engagement in the Breeders' Cup Classic (held once again at Santa Anita).

"We have a few gaps in his schedule that need filling - a late spring/early summer race somewhere, but there's certainly time to figure that out," he says with a laugh.

A keen student of racing history, Campbell says he is "inclined to point Palace Malice toward those wonderful old races that the immortals have won."

Campbell has always said that Kelso was the greatest racehorse he ever saw, Kelso won the Woodward three consecutive years (1961-1963) and the Whitney Handicap three times as well (1961, 1963 1965). The mighty gelding also won the Jockey Club Gold Cup five years in a row (1960 - 1964). To have Palace Malice win these three races would give Campbell a thrill like no other.

Mike and Karl Schneider who are partners in Palace Malice were just about everywhere their colt was in 2013, and plan on doing the same in 2014.

"We are so excited about the upcoming year," says Mike. "Palace Malice is such a fun horse and we plan to be at each and ever one of his races. Having him in Aiken has been a thrill - the atmosphere is so much more relaxed and we can spend time just hanging out at the rail or by his stall. It's a real treat.

"This horse is a real celebrity in Aiken," Mike continues. "I love the fact that people can watch him gallop and experience in person what they were only able to see on television during the past year."

Everyone in the Palace Malice camp agrees that if you have a good horse, living in Aiken really embellishes the experience.

This article is copyrighted and first appeared in The Aiken Horse. It is reprinted here by permission.
Posted by Three Runs Plantation at Friday, February 14, 2014