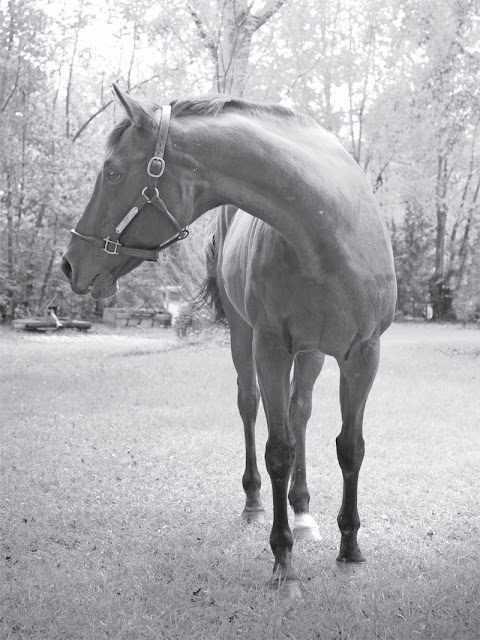 There have been many lovely horses in Anne Torreyson’s barn over the years, but surely none has been as well-bred - nor as handsome - as her 23-year-old Thoroughbred Filch. The bay gelding was bred and foaled in Kentucky, broken as a yearling in Aiken, raced for four years, then returned to Aiken where he eventually became Anne’s foxhunter.

Filch was foaled at Claiborne Farm in Paris, Kentucky in 1989. Owned by the Hancock family, Claiborne Farm is the gold standard of breeding farms, the home to great stallions and exceptional broodmares. Filch carries the genes of multiple generations of champions through both his sire and broodmare lines. His sire was the Claiborne stallion Private Account, by the hard-knocking racehorse Damascus. He is out of Doodle, a mare whose grandsire was the great Bold Ruler, sire of Secretariat and many other champions.

For many years Claiborne bred and raced horses in partnership with William Haggin Perry, and Filch was one of about 30 foals from this joint breeding venture in 1989. As a youngster, he would have romped through Claiborne’s lush pastures, but in his yearling year his real education began, and he was sent to Aiken to begin the training process.

Tim Frommer broke all of William Haggin Perry’s horses in Aiken at that time.

“All the yearlings were jointly owned, but Mr. Hancock and Mr. Perry would flip a coin to see who would run each colt or filly: heads would be Mr. Hancock, tails Mr. Perry and so forth,” explains Tim. “It was the only fair way to divide the horses: half ran in Claiborne’s colors and half in Mr. Perry’s.”

Filch’s coin toss landed him in the Perry barn, and so he came to Tim to be trained in September 1990.

“When we got Filch he was just a big, gangly kid, and kind of squirrely at first,” recalls Tim. “Once he learned the ropes, though, he was great.”

Filch trained in Aiken throughout the winter, and the following spring, he was shipped up to Belmont Park to train in Scotty Schulhofer’s barn. He made his first start in July, going seven furlongs on the turf, with Jerry Bailey riding. Not so promisingly, he finished last in the 11-horse field, 27 lengths behind the winner. He was fifth in his next start at Saratoga, hampered by a slow start in the seven-furlong race. It took him three more tries to break his maiden, just days before the end of the year. He was going a mile and an eighth on Aqueduct’s inner track. With the jockey Mike Smith urging him down the stretch on that cold December day, he got up in the final strides to win.

Like all Thoroughbreds, Filch turned a year older on January 1. The colt was obviously not on the Derby trail, but the feeling was that he still might become a nice allowance horse. He made his first start as a 3-year-old in February of 1992, finishing third in his allowance race at Aqueduct. But he didn’t start again until the fall of that year, and when he did he had a new trainer, Bill Mott. Filch made eight starts for Mott over the course of a year and a half, tallying a win, a pair of seconds and a third.

During his 4-year-old year, Filch was claimed by Dolly Bostwick – an owner and trainer based in Aiken. Dolly ran him several times at Delaware Park and then gave him the winter off before shipping him to Birmingham Race Course in Alabama in the spring of 1994. In the last two starts of his career, Filch was running for a $4,000 claiming tag and was unable to finish those mile and 70-yard races. Dolly called it a day and sent the colt back to Aiken. Filch had 21 starts, with two wins, two seconds and two thirds, and purse earnings of $41,696.
When Filch returned to Aiken he was gelded and then turned out for some much needed rest. When Anne Torreyson heard about him some time later, he had been sold to a woman who was not used to dealing with large, rather unruly Thoroughbreds, and he had become a handful.
“He was walking all over people and obviously hadn’t heard the word ‘no’ in quite some time,” recalls Anne. “My hunter, Ice Falcon, was 15 and it was time to start looking for a replacement.”

After several friends gave enthusiastic reports on Filch for his overall build and suitability for hunting (but not his manners), Anne took the plunge and bought the 16.3-hand bay. It was time for Filch’s second career.
Anne had started coming to Aiken in 1988 from Unionville, Penn., calling herself “one of those winter gals.” In 1992 she became a permanent resident and later married Win Magerkurth, who was working at the Savannah River Site at the time.
She readily admits that Filch was a handful in the beginning. “I was suffering from chronic fatigue syndrome and he really tired me out. I had to ride him in a twisted snaffle with a figure-eight noseband. It worked, but we both hated it.” Later Anne switched to a snaffle and curb, which she said worked better.
Although Filch proved to be a brave and enthusiastic jumper, he hated ditches. Since these were the early days of their working relationship, Anne still held out hopes that she might event Filch, but the ditch problem was a deal breaker.

“I took him to a Lucinda Green clinic and he was wonderful over the jumps,” said Anne. “The ditches were such a problem that I thought Lucinda would ask us not to return after the lunch break! She had a lot of patience with us, even though Filch was insistent that he couldn’t do it. Our big breakthrough came when she had me put on a pair of Prince of Wales spurs. Filch immediately said ‘Yes - what would you like me to do?’”
From that rather rocky beginning came almost a decade and a half in the hunt field, and countless memories.
“One time many years ago I took Filch to the Countryside Alliance fundraiser in Newnan, Georgia. It was a great time, ending with one of those huge bonfires. The hunt was fantastic - we were out for five hours! When we got back in I just crawled out of the saddle.”
Filch hunted with Whiskey Road Foxhounds, Camden, Belle Meade, and Cheshire in Pennsylvania.
Anne rode Filch every day and hunted twice a week. “I couldn’t give him a day off in those early days,” she explains. “He was a big horse and had so much energy.”

Because Anne had dogs at her farm, Filch never had a problem with the hounds.
“When I first got him we would be riding out on a trail, with my dogs darting in and out of the bushes. He got used to them pretty quickly.”

As the years went by, Filch started to lose a step or two, and his ankles would start acting up. He was not as fast, but he was much, much wiser, and Anne would use him to teach younger horses the way of the hunt.
Anne retired Filch at the end of the 2011 season, but he has not been “turned out to pasture” by any means.
“He has become ‘Uncle Filch’ at home, showing youngsters how it is done,” laughs Anne. “He makes a very good uncle, expecting all who are with him to act just as he does, being generally nice and polite. He is a very classy guy.”
Like an aging movie star, Filch has his support and medical staff just a phone call away. Dr. Tom Stinner, Dr. Stephanie Hobbs and Dr. Shelley Onderdonk cater to his every ache and pain. Anne feeds him a diet rich in whole grains, with the occasional Chinese herbal remedy mixed in.
Although he never lived up to his breeding on the track, Filch became a star in the realm of foxhunting, at least in his owner’s eyes.