Upon hearing the names “Sunshine Bob” and “Wentworth” you might think of characters in an old Western movie or perhaps a 1930s vaudeville act. In reality, the owners of those names are an odd couple living at Equine Rescue of Aiken. Sunshine Bob is a one-eyed Thoroughbred who, before coming to Aiken, was literally wasting away while running in cheap claiming races. Wentworth is a Belgian draft horse who spent most of his life toiling in the fields of an Amish farm.
The fact that the two horses are now best buddies and will live out their days as companions in Aiken is a testament to the perseverance of Jim Rhodes, the manager of Equine Rescue of Aiken, and to its benefactor Isabel Furland.
Jim spotted Sunshine Bob while making a visit to the racetrack in Charles Town, West Virginia, in October 2009. Jim runs a few of his own horses at that track, but he also brings some Thoroughbreds back to Aiken for adoption on a regular basis.
“The first time I saw Bob he was in a stall in a concrete barn across the street from the main stable area at Charles Town,” recalls Jim. “It was so dark and dreary that I couldn’t imagine keeping any animal there, and yet there was Bob. He was the sweetest horse, curious about everything and not the least bit skittish, even though he had lost his right eye. He was severely underweight and I couldn’t believe that he was being run a couple of times a month.”
Jim fell in love with Bob and promptly called Isabel Furland about the gelding’s plight. She gave him the go-ahead to try and get the horse for Equine Rescue of Aiken, but Bob’s owner didn’t want to give him up. Jim left Charles Town without Bob, but with the hope that the owner would consider selling him in the near future. A month later, Isabel’s husband Richard called Jim, relaying the message that his wife wanted Sunshine Bob as her Christmas present that year. 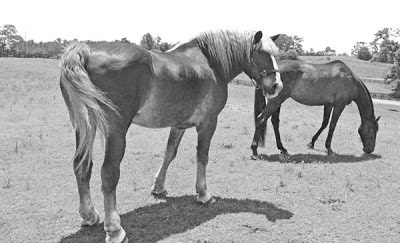 Jim called Bob’s trainer with an offer, but was told that the gelding’s owner planned to keep running Bob with the hope of earning checks on the racetrack. To that end Bob had been moved to Ohio to run at Thistledown and Beulah Park. Sunshine Bob was a winner once in his career – he won a maiden claiming race at Charles Town back in March of 2009. That was the only time he would get his photo taken in the winner’s circle.
Nearly ten months passed before Jim heard from Bob’s connections. During the ensuing months – from November of 2009 until August of 2010 – Bob ran 13 times, with his best finish a third place. After that last race, Bob’s trainer called Jim, saying that for $800 the gelding could be his. Jim wired the money and arrangements were made to ship the horse to Charles Town, where a stall was waiting in the barn of Kenny Huffman, Jim’s trainer.
“I was so excited when Kenny called and said, ‘Your one-eyed horse just arrived,’” says Jim. “I was putting together a load of horses from Charles Town, so Bob had to wait a few weeks to get to Aiken, but Kenny made sure he was taken care of in the meantime.”


Jim returned to Charles Town and was in the process of loading his trailer for the trip back to Aiken, when he received a call from Isabel Furland. She asked if he minded driving to New Jersey because she had just purchased a Belgian draft horse from the weekly Camelot Auction there, through a website that finds homes for those animals not sold each week.
“I knew Miss Isabel had a passion for draft horses and it’s a sad fact that adoptions for those breeds are very difficult, so I was not completely taken by surprise with her call,” laughs Jim. “So the Charles Town horses and I headed to New Jersey and nine hours later we met Wentworth.”


Wentworth was 17 at the time – a broken down, skinny (but still huge!) toffee-colored teddy bear.
“You could tell he had done a ton of work in his day, and he still had collar sores to prove it,” Jim says. “It was as if they had taken him from the field right to the auction yard, after all those years of work.”


For the trip to Aiken, Jim put Bob and Wentworth side by side, with a large hay net between them. By the time the journey south was complete, the two horses were the best of friends.


Today, Bob and Wentworth share a pasture at the rescue with a few other horses, but the two only have time for each other. Both horses are now in good condition – Wentworth, no longer skinny, weighs in at a hefty 1400 pounds. Their coats are shiny and both exude contentment and good health.


“Bob and Wentworth are permanent residents,” says Jim. “I wouldn’t let one be adopted without the other and we certainly don’t have a waiting list for draft horses.”


Bob’s racing career spanned three years, during which he ran 30 times, with a win, a pair of seconds and three third place finishes. From all that work, running in cheap claiming races, he earned a mere $22,273. The fact that he had only one eye and he was distanced in the majority of his races could have turned him sour, and who could blame him. But somehow, Sunshine Bob lived up to his name. Perhaps the saying “blood will tell” holds true: his paternal grandsire was the gutsy Unbridled, winner of the 1990 Kentucky Derby, while his maternal grandsire was the spectacular sprinter Meadowlake. Sunshine Bob obviously did not inherit the raw talent of his grandparents, but he did retain their class, and that is what Jim saw on that day he first encountered the horse at Charles Town.


We can only imagine what the wise old Wentworth has seen in his nearly two decades of life. For sure he had never come across a one-eyed Thoroughbred during his days as an Amish farm horse!


Fate brought the unlikely pair together and thanks to the haven that is Equine Rescue of Aiken, Sunshine Bob and Wentworth will have peace and friendship there for all their remaining years.