Paddy is probably one of the most contented and recognizable horses on Chime Bell Church Road. He has the distinguished white hair of an elder statesman, and a bevy of female companions in his paddock. What more could a 28-year-old Thoroughbred gelding wish for after a career that spanned six years on the racetrack and many more in the eventing world?

Paddy has been owned by Shirl Tronoski since 1996, but he was born and raised a Midwesterner. His Jockey Club papers state that he is an Illinois bred, and, although his dam never raced, his sire, Young Bob, was a graded stakes winner and carried the blood of the great Roberto. In October 1985, when Paddy was a yearling, he went through the ring at a mixed sale, bringing just $3,000. Fortunately for Paddy, the buyer that afternoon was Arthur Menshouse, a notable owner and racing aficionado in the Midwest. Arthur’s brother Don trained all of his horses, so racing really was a family affair for the Menshouse siblings. 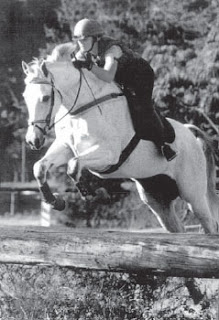 Paddy’s registered name was Man of the House, which must have been a play on Arthur and Don’s last name. Paddy (the nickname Shirl gave him later in life) was a model of consistency early in his racing career. As a 2-year-old, he raced six times and rewarded Arthur Menshouse with a solid return on his previous year’s investment – nearly $18,000 in purse earnings. He won his first start and then had a pair of seconds and thirds in stakes company.


Man of the House ran almost exclusively at Fairmount Park in Collinsville, Illinois, which is about 12 miles from St. Louis, Missouri on the eastern shore of the Mississippi. That track is a far cry from Chicago’s sophisticated Arlington Park, but Paddy was king there for several years, winning races in five of his six competitive seasons. When he was retired in 1991 at age 7, Paddy had run 48 times, collected 11 winner’s circle photos and his earnings stood at $134,288. He had won several stakes races for his owner, and placed in a handful of others.
What happened over the next years is a bit of a mystery. In 1996, the gelding turned up in the barn of an Ocala, Florida horse trader. He didn’t have any formal training and Shirl likes to imagine that he was turned out in a big pasture as a reward for his years of hard work at the track.
At that time, Shirl was living in Florida and embracing the world of eventing. Her horse at that time had a terrible work ethic and Shirl complained to her friend Sophie that there were only two modes of operation when she was riding him – when he was “on” she would come away with a ribbon, but when he was “off ” there was the possibility that she would be taken away by the paramedics. Sophie had just acquired Paddy and had been pleased with the progress he had made in a little over a month – he cleared three feet the first time she asked him to jump!
Shirl was introduced to Paddy and was impressed with his gameness, and before too long she purchased him. The pair’s first outing was at a USCTA horse trials in Altoona, Fla. at Rocking Horse Stables. Going in the Beginner Novice division, Shirl and Paddy were in fourth place heading into stadium.
“At the final fence Paddy grabbed one of his front shoes almost completely off and was cantering on the clip,” recalls Shirl. “I had to pull up, of course, and dismount, which meant we were eliminated. In my heart I knew that one of the ribbons was his, but we’d have to wait for another day.”


In his next show, Shirl had a friend ride Paddy. In what was only his second competition, he performed incredibly, having double clear rounds and ultimately finishing seventh. The gelding was as admirable in the eventing world as he had been on the race track.
Although he was all business when he had a rider on his back, Paddy was another animal entirely when he was in his stall.
“He had the worst stable manners I had ever seen,” Shirl says. “He was forever trying to bite and kick me, and my husband nicknamed him ‘The Great White.’ Finally I had had enough and gave him back to my friend Sophie.”
A few months later, Sophie discovered she was pregnant and didn’t want to work around Paddy’s flying legs and snapping teeth. She called Shirl up and asked her to take the gelding back. Shirl decided to give him another try.


“I thought he just didn’t like me and had taken that very personally,” Shirl laughs. “Knowing that he was horrendous with everyone made it a challenge!”


Whenever he was tacked up for schooling or a show Shirl said he became the perfect airline steward and all but asked, “How can I help you today?”


“I never had a horse who loved competing so much,” says Shirl. “I remember at one Novice level event we had some trouble in the stadium round. For some reason I couldn’t see the distance to a jump and I panicked, throwing the reins at him and taking my leg off. Paddy hesitated a split second, probably thinking ‘Where did you go?’ and then crawled over the fence anyway. There was such a clattering of rails that I was sure we had taken the standards down as well so I didn’t even look back. But after a few more jumps I heard the announcer say that we had had a clean round – no rails and no time faults. Amazing!”


“At that particular show we were going Training level for the first time. The cross country course looked huge! Paddy’s ears were like radar – he was always looking for the next fence. After the third fence I realized all I had to do was hang on and steer. Paddy would set himself up for the jump and he never missed. We were in the ribbons even though we had not scored all that great in dressage.”


Jumping was Paddy’s favorite part of eventing. Shirl says that at one show the dressage ring was very close to the stadium jumping ring. Paddy had half of his attention on his dressage moves and the other half on the jumps, which made his trot more like a parade prance. Shirl remembers that she smiled through the whole test, even though she knew they wouldn’t get a good score.


Paddy was 15 at that show, and Shirl competed him until he was 20. They would do between six and 10 shows a year, and all were an adventure.


“He would always grunt when he jumped,” laughs Shirl. “He was not great with tucking his knees so he compensated by jumping higher. It was a thrill. Ditches had to be his favorite things in the world and he would literally launch himself at them.”


As he aged, Paddy mellowed, not only in his demeanor but in his coloring. He has gone from a flinty steel color to a flea bitten grey, although from a distance he looks white. When Shirl moved to Aiken in 2008, she made sure that Paddy had a life of leisure and now his only job is babysitting broodmares and their babies.


“For all the years we competed, Paddy always managed to keep himself between me and the ground… and he doesn’t owe me a penny,” says Shirl.


Shirl said that Paddy’s show name was Patton since he was always such a war horse. The pair have been together for more than 15 years and although there were some fierce battles in the beginning, he has been the horse of a lifetime for her.


“I was born loving horses,” Shirl says. “Before I got my first pony I would ride the sawhorses in my father’s workshop. But even in my wildest imagination I never thought I would own a horse like Paddy.”