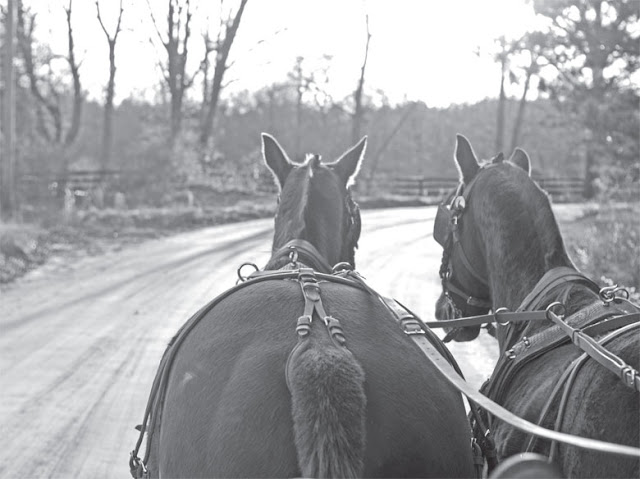 Clip clop, metal shoes clanging on the pavement, leather slapping, chains jingling, wheels rolling across the ground, the wind rushing by. For a horseman, the smooth hypnotic rhythm of a horse trotting is one of the most wonderful sounds in the world.

There is a huge difference in the way the world seems when you are on the back of a horse, and an even more dramatic difference when you are rolling along behind one. You are in control, but from a distance, connected only by pieces of leather. It seems even more of a partnership than when you are mounted.

Putting a horse to a vehicle can be done to accomplish almost anything. Stagecoaches crisscrossed the western part of America, making settling it possible. Horses pulled plows, seed sowers and harvesters to help feed much of the world’s population for thousands of years. Canals around the world would have been nothing more than ditches filled with water if not for horses pulling barges along them. Civilization without the knowledge of how to train and use horses to perform work would look nothing like it does now.

When the automobile arrived on the scene in America in the early 1900s, the use of horses as a source of power waned.. Cars, trucks and tractors were much more efficient at their jobs. When it was no longer necessary to own a horse to plow fields or travel to town, horse ownership became a luxury.

Even in Aiken where horses were king, the use of powered equipment to do things formerly reserved for horses had a huge effect on who could own horses and what they would do with them. There are practically endless accounts of Aiken’s winter colony residents and their horses. They trained them for racing and steeplechasing; they hunted, jumped, played polo and they drove. It’s easy to imagine them having fun with their horses in and around Aiken. No day would have been complete without a drive around town or through the Hitchcock Woods. Coaches filled with people young and old, off to enjoy their friends, would have been a marvelous sight and sound. The rhythms of the day were filled with the sounds of horses pulling carriages, wagons and coaches. 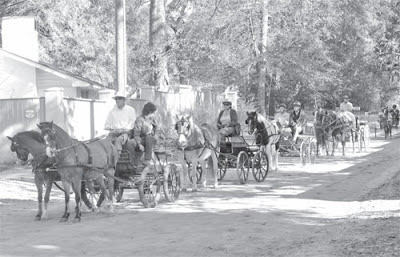 “The Hitchcock Woods is still one the best places to drive that there is,” says Peggy Dils, who is the president of the Aiken Driving Club. “Many of its miles of trails and paths are perfect for carriage driving. But by no means are the Woods the only place to drive in and around Aiken. Our club takes scheduled drives in lots of places. We also have several game days, and a spring driving show. Our members take part in events February-March 2012 The Aiken Horse 81 in town, like the carriage parades at the Aiken Trials and Aiken Steeplechase, as well as parades downtown and many other things. Right now our membership is as large as it has ever been, with over 200 people in the club.”

Peggy says that membership in the Aiken Driving Club can be broken into three different groups.

“About a third of our members are interested in pleasure driving. Another third don’t drive themselves, but are social members. And the other third are interested primarily in competitive driving. These three basic groups have a lot of members who cross over into the other groups also. We encourage anyone interested at all in carriage driving to join our club and participate in our events. Everyone is welcome, and we always need non-driving volunteers to help out.”

Aiken and its surrounding areas are experiencing a surge in their population of competitive drivers. This year, Aiken had five drivers competing in the World Pony Driving Championships in Slovenia. The United States team, which included four Aiken-based drivers, came home with the bronze medal.

Aiken is also the home of the Katydid Combined Driving Event, which is one of America’s premier driving events. Katydid draws competitors from all over the country and the world. 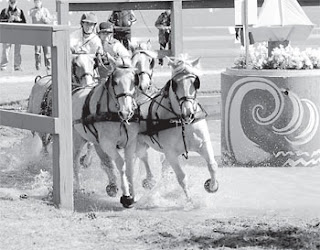 “We’ve been putting on the Katydid event for 10 years,” say Jennifer Matheson, who manages and co-owns Katydid Farm. Jennifer was a member of the U.S. bronze medal team at the World Pony Championships and has been competing at the international level for years. “Our first event had about 30 entries. Our second year was cursed with some bad weather and only had about 17 entries. This year as well as the last couple of years we reached our maximum number of drivers at around 75. The National Single Horse championships were held at our event in 2011, and we are applying to hold the National Pony Championships here in 2014.”

The Aiken Driving club is the largest driving club in the area, but it is not the only one. Several smaller groups are popping up catering to more specific groups.

“The South Carolina Pleasure Drivers Group is a small very relaxed group,” says its founder Robert Chambers. “Everyone is welcome. Our mission is to promote safe and fun driving opportunities to Aiken’s drivers. We like to travel around the area and find new and fun place to drive. Besides the Hitchcock Woods, we like to travel to places like Lakeview Plantation in Allendale, and we are planning a spring trip to the Biltmore in Asheville, N.C. Last week, several of us met at the Green Boundary Club in Aiken and drove around the historic horse district and then into the woods. When we got back, we had some sandwiches and shared some stories. It was a very casual, pleasant drive. We’re always looking for new people to enjoy driving with us. If you don’t have a horse or have never been driving before, that’s fine. Contact us and we’ll get you out there having fun.”

If you have ever thought about learning to drive or wondered what it was all about, you could not be living in a better place. There are groups of people who drive at every level, from national champions and international competitors to people who just like to watch and volunteer at the events in town. There is plenty of room for everyone.

If you already own a horse or horses and participate in another discipline, but are interested in driving, Aiken is a great place to get started. “You should start with a lesson,” is what you are going to hear from anyone you ask about teaching your horse to drive, and it’s good advice. Many features of basic horsemanship transfer easily from your skill set if you are already a rider. But driving is different in a lot of ways. There are things that are more important for a driving horse than for one that is ridden, things like being able to stand still and to respond to voice commands and aids, as opposed to leg aids.

If you are wondering about the cost of all the things you will need to teach your horse to drive, you might be pleasantly surprised. If your goal is to have a four-in-hand to compete in international events, the harness alone for the presentation phase could cost you $18,000 and up, and the carriage could be much more. If you want to start with one horse, you can get a used leather harness, or a synthetic one made right in Aiken for less than the price of an average saddle. Carriages, especially if they are used, can be had for much less than you might expect.

If you appreciate horses and Aiken, and enjoy the illusion of going back in time, carriage driving may be for you. In the days of the winter colony, even after automobiles were common, many of Aiken’s winter residents preferred going about town in horse drawn vehicles, often driving them to polo matches, the horse show or the training track. You can still do that today, or simply drive down the streets of Aiken’s historic district, listening to the drum of your horse’s hooves, and imaging yourself back in an earlier time.