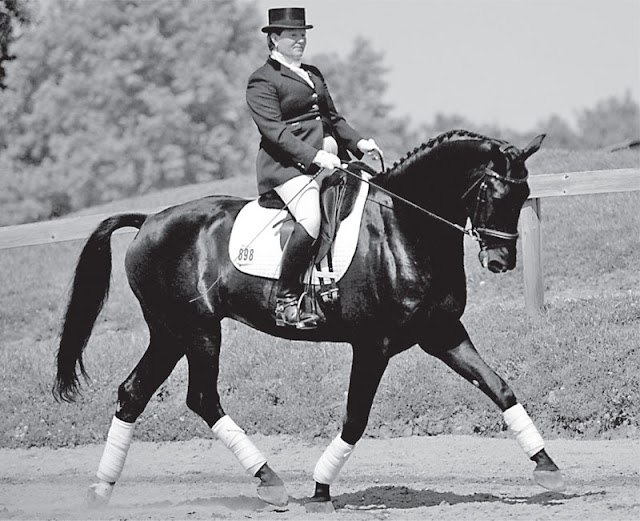 This is Charlotte Bayley Schindelholz’s second winter in Aiken, and she’s here to stay.

Last winter, the Ohio-based dressage trainer worked out of a small private barn near Wagener. This past fall she leased the barn at the Ridge at Chukker Creek through her long-time friend Chris Taylor, also a dressage trainer. After spending the holidays in Ohio, she is back at Chukker Creek with her entourage of 15 horses, and plans to stay until early May.

“I had done the Wellington thing, but didn’t like it,” Charlotte explains, referring to the show scene in south Florida. “Here, I find the people generous, thoughtful and real horse people. I see a lot of talent. I find riders here have a tremendous desire to learn more. They are so enthusiastic – it’s infectious for the horse, the trainer and the rider. That’s the appeal of Aiken. I have great respect for the trainers already here, but there is plenty of room for more trainers without taking anything away from someone else.”

A Life With Horses

Charlotte Bayley was born in Parkersburg, West Virginia, minutes away from Meredith Manor International Equestrian Centre, the first college in the country to offer a degree in equestrian studies. From the time she was 5 years old until she was 17, Charlotte boarded her horse with Kay Meredith, who founded the school. There, she grew up riding under the most famous names in the equestrian world, although at the time she didn’t quite appreciate how lucky she was. Among her early teachers were Colonel Bengt Lundqvist of Sweden, who was the coach of the U.S. Olympic dressage team, Melle Van Bruggan, a Swiss dressage champion and later U.S. coach, and Chuck Grant, a 1997 inductee into the United States Dressage Federation Hall of Fame, who introduced dressage to the Midwest just after World War II.

“I got all the good stuff. I got to see all the great trainers without having to go through the Meredith Manor program,” Charlotte says. “It definitely was trial by fire; it wasn’t easy. Then, I had the good fortune of going three hours away to the second school in the country to develop an equestrian program, Lake Erie College. Dressage was just beginning in the U.S. at that time.”

At Lake Erie College in Painesville, Ohio, Charlotte rode with Jean Froissard, who taught the classical French style of riding as guest artist in residence. Later, she rode with David Hunt of Great Britain and got more international experience under Major Anders Lindgren of Sweden and Major Miguel Tavora, who is a master of Portuguese traditional equitation.

While she was teaching riding at Lake Erie College, she had a student named Donald Schindelholz.

“We were not allowed to date the students we were instructing, so I stopped giving him lessons so I could marry him,” she admits.

Charlotte and Don stayed in the Cleveland area and eventually built their own place, Maple Star Farm. Besides having his own career as a marketing representative for a major corporation, Don keeps the business side of the barn going, including taking care of the bookkeeping.

“He has made my life easy,” Charlotte smiles. “And it is lovely in Ohio from May to October. However, we just closed on a house in the Historic District, so we are on our way to becoming full time Aiken residents.”

Charlotte (or is it Don the businessman?) recognizes that the disadvantages probably outweigh the advantages of having two large facilities, so an Aiken full time barn will depend on the Ohio real estate market. In any case, the Schindelholzes will be here from November to May, depending on Charlotte’s clinic, training and showing dates and the demanding travel schedule of her busy import business.

“I’m getting to the grey side of wanting to compete, but it is a good way for people to see sale horses,” she says. “We buy and sell dressage and event horses, mostly Dutch Warmbloods and Friesians. We look at high quality adult amateur horses, some young, some made. The Friesians I buy must be forward thinking, showy and hairy – those that are bred to be lighter horses for riding.”


“I am such an American melting pot of different philosophies,” Charlotte says. “I lean to classical development, but there are different methods – some like more or less contact, sometimes hard discipline, sometimes light, it is what works for that horse. There’s more than one way on the road to Rome. I’m basically success-oriented. I don’t align with one type of training. It’s about education and consistency.”

Charlotte prefers to give three-day clinics once a month in a location and wrap at least one clinic around a horse show so she can be a coach through the show. It does no good to go in once, give instruction, then leave, she says.


As for what students should take away from Charlotte’s instruction, she describes herself as student-centered in her approach.

“My job is to make riding more rewarding, make it a good experience and to be successful. It doesn’t have to be hard, it can be a simple process,” she insists. “I want to improve students’ riding by giving them a system that gives them more confidence to know how to go forward. Riders need to know the exercises to work on at home, how to find their goals, how to practice with their own coach.

“Even international riders need eyes on the ground to help them improve their scores and to get a good team together. Lower level riders often need to get a better sense of the horse, how to sit, create a connection, understand the aids. I give them the tools not to be afraid to try new things. You have to have skill in coordinating memory and discipline to practice to be a better rider.”

Charlotte concludes with a hearty laugh: “I am approachable and enthusiastic. I’m not a Dressage Queen. I like reining, or cutting – I love to learn about everything. I like people and I enjoy horses. I’m Irish! I laugh and enjoy life.”


Charlotte can be reached at 216-337-8045 to arrange for lessons. For more information, go to her website: www.csbdressage.net.