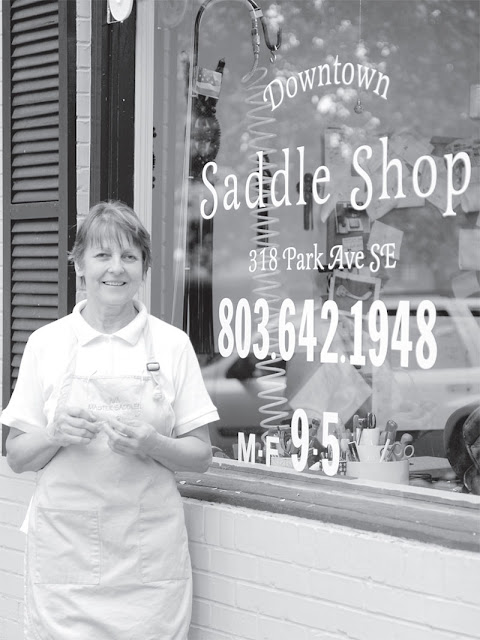 The Downtown Saddle Shop is a small storefront on Park Avenue filled with saddles in all stages of repair. There are pieces of leather hanging from cubby holes, photographs, work items and tools tucked into carriers, and bridles hanging from hooks. Particularly eye-catching are the intricate braided leather pieces of art hung on the walls. These are Hungarian shallongs, which are decorative leather ornaments that are traditionally attached to a horse’s browband to serve as fly shields. In one corner stands a well-worn antique European stitching horse, a special wooden bench designed to hold leather for hand-stitching.

Ava, who is a master saddler, grew up in a small village cradled in a bend of the Danube River not far from Budapest. She always liked to travel and, in the process, found she had a knack for picking up languages. She has a degree in German and in Italian, and she also speaks English, Greek, Finnish, Russian and several other languages. To feed her taste for travel, she became a flight attendant with Malev Hungarian Airlines when she was a young woman, and had the good fortune of being based in several countries. Flying runs in the family, and both of Ava’s brothers are pilots in Hungary.


“While I was still flying I met a woman who worked as a leather artist in Budapest,” Ava explains, “and I just fell in love with leatherwork. She invited me to come work with her to see if I liked it. In four weeks I was no longer with the airlines. She taught me so much about leatherwork. After three years with her I felt that I could do leather in a much different way. I wanted to do something that was more permanent, more of a specialty. I decided I wanted to be a saddler.”

However, Ava had never even seen a horse, let alone a saddle. But somehow the idea persisted in her mind. Her world changed from leading the glamorous life of an international flight attendant (this was in the 1970s she says, when it was still glamorous to fly) to the hard work of leather making. She went to a small saddle shop north of Budapest and asked the master saddler there, Ferenc Laszlo, if she could apprentice with him.

“I asked if I could watch and he said O.K.,” she explains. “For three weeks all I did was come in every day to watch and learn, following him around every step. Then he said ‘yes’ he would take me on as an apprentice if I could learn to sew with two needles, not just hemming a skirt. He taught me saddle and tack repair. He had only one basic requirement: In order to repair properly you must know how to build and make tack items and know the purpose of each. He said that would put me in a position to do a better job. I found out this was much more than work. Craftsmanship is an art, it’s a business, and it is the friendships you make. But he warned me it was hard work: you can learn as long as a candle burns down. It is an old Hungarian saying, meaning it will take years to learn your craft.”

In Hungary, a saddler apprentice must work with the master for five consecutive years, learning theory as well the mechanics of tools and machinery. In the sixth year, after taking an exam, showing five original pieces and writing an essay detailing the history of leatherworking, one finally becomes a master saddler.

After becoming a master saddler, Ava went on to work for the National Riding Club of Budapest, the home of the Hungarian Equestrian Team. It was here that Ava took her first riding lesson. She rode every day for the years she worked there. After five years at the club she decided to open her own repair business, fortunately able to keep many of those same elite horsemen as her clients.

The Long Road to Aiken


While still living in Budapest, Ava came to the U.S. to visit a friend in New Mexico.

“On the second day, I still had jet lag, I found a copy of a horse magazine on the table,” she says. “A company in Virginia was advertising for a master saddler specializing in English saddles. It turns out there were a lot of people who made Western saddles but, at that time, very few people in the United States who specialized in English tack. My friend encouraged me to talk to them. It turns out that the advertisement was a connection to Tad Coffin, a former Olympic eventing rider. He had been advertising for three years and had only one response. When I told him I knew Bert de Némethy [the former USET show jumping coach] that sealed the deal without any further interview.”

That was 1997. Ava returned to Budapest, packed up her things and moved to Virginia. With Ava on board, Tad Coffin Performance Saddles was launched. Coffin had been working with various designs since the late 1970s, testing types of trees and fine tuning jumping saddles. He had even consulted with NASA engineers to come up with lightweight, flexible and strong saddle trees.

“This was the very beginning of his business,” Ava explains. “We even had to build our own benches. Tad was tireless in testing saddles on horses. He is a perfectionist. He could tell if a saddle was a quarter of an inch off just by riding in it. Those were the best years of my career, working with an Olympic rider such as Tad. He himself actually worked on the saddles. It was the best saddle making school - I learned the most with him. There are not many chances to work with people who are so dedicated to working with horses and for their benefit.”

Life later took her to Florida where she continued her repair work. In 2005, Ava became a U.S. citizen.

"At that point in my life I wanted to be employed,” she explains. “I eventually took a job with Custom Saddlery [at their Aiken production plant] to be the master saddler for their production of 15 dressage models. At that time, I maintained – repaired and restored – Steffen Peters’ saddles.”

In Aiken, Ava found a beautiful and welcoming equestrian community. The place reminded her of European towns, with a wide variety of different types of people and a large international community. After several years in Aiken, she felt there was room for another saddler and tack repair service. In May 2012, she opened her own store on Park Avenue. While the name says “Downtown Saddle Shop,” she says she only specializes in saddle and tack repair, reconditioning and restoration. She no longer makes saddles from scratch, although the job of restoring some of the saddles in her store looks very close to starting from the beginning.


“I like educating individuals about saddle making and leather work,” Ava explains. “I would like to do training and educational programs about English saddlery - how to buy, maintain and how to fit a saddle. It’s a two-hour talk, from a saddlemaker’s point of view. I want people to know what makes a good saddle.”

In the longer term, Ava would like to train saddlemakers and to train people in English saddlery and leatherwork.

“My goal is to leave my knowledge to people who would serve in their own home states,” she says. “They would be certified by me. I could mentor people who come to my shop to learn the business. I would like to see more certified saddlers serving people and their horses. If your horse is happy, then you are happy and I am happy, too.”