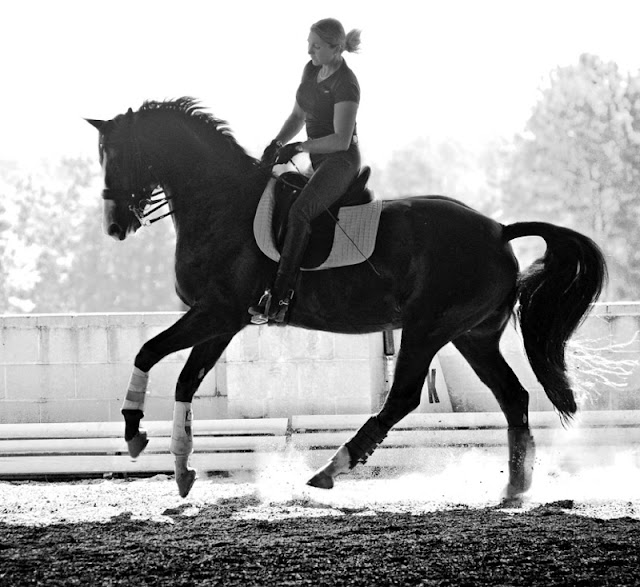 Because Shawna Harding lived in Germany for 8 years in the 1990s, she is very familiar with the European dressage scene. She was able to put this knowledge to good use during her recent four-month trip to Europe.


Over the winter, Shawna was awarded the $25,000 Carol Lavell Advanced Dressage Prize, which provides financial assistance for coaching and training to a qualified candidate. Using these funds, she packed up two horses, her own Come On III and Tonya Rowe's Rigo, assembled a mountain of gear, and flew out of Kennedy Airport on April 9.


"Carol Lavell and The Dressage Foundation made it possible for me to travel to Europe and get the exposure and experience I need to excel in this sport," explains Shawna. "I had qualified for the World Cup in Leipzig, Germany, with Come On III, so the time was right to make the trip."


Shawna chose to study with the Johann Hinnemann, a renowned trainer whose facility is in Voerde, a town located in the beautiful Niederrhein region of Germany.
"I arrived on a Saturday evening and was welcomed with open arms and we began training on Monday," says Shawna. "The experience at Johann's was very structured and intense. He really wants you to get it right and to get the most out of your horses. He is very good at correcting all the little details and mostly getting the optimal preparation before a movement and re-balancing and maintaining balance and rhythm while in the movement."

Less than two weeks after she arrived in Germany, Shawna and Come On III were competing at the World Cup Finals in Leipzig. Four World Cup Finals were held under one huge roof – driving, jumping, vaulting, and dressage. It was the first time that Shawna and Come On III had competed inside a large stadium, surrounded by all the noise and excitement that goes along with such a venue.


"One of the great experiences throughout my stay in Europe was being around those people I like to call my 'dressage heroes,'" says Shawna. "Incredible riders like Edward Gal and Isabell Werth were warming up right alongside me at the World Cup, and of course we were all stabled together."


"The electric atmosphere in the ring was a bit much for Come On III's walk. He bounced and jigged, which cost us a lot of points," Shawna continues. "I was so proud of him for trying to stay focused in that huge stadium with its crowds and noise."


Shawna finished 14th in the Grand Prix Freestyle, with 64 percent. After Leipzig, Shawna returned to Johann's for more training before a competition in Hagen called "Horses & Dreams" which ran from May 4 through 8. More than 150 Grand Prix horses were on the grounds.


"This was an amazing show – absolutely first-class all the way," says Shawna. "The weather was perfect and I got to see some of the best riding and training. It was interesting to me to see the German trainers and riders conversing with each other and helping each other. If a training issue comes up they will ask each other for suggestions – something you don’t see a lot of here."


Shawna had a bit of a break from competing, since the next show on her schedule – the CDI 5* World Dressage Masters – was a month away (June 2 – 5 in Munich). So, back to Voerde where there was more instruction from Johann.


Here's a taste of an average day at Johann's (from Shawna’s journal entries): "May 23 – It's a beautiful sunny day in Voerde. CO3 was good. We worked on some piaffe and passage, basic canter and flying changes. Rigo had a hack day and both got clipped and cleaned up and vaccinated."


Then it was on to Munich, Shawna's old stamping ground, where she met up with many of her old friends. 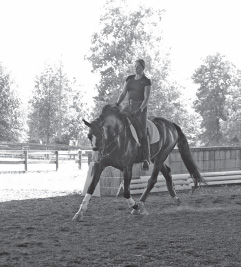 "The World Dressage Masters was a fantastic competition and the amount of people, horses and attractions at the event was amazing. It's a huge competition and many of the dressage horses couldn't cope with the atmosphere," Shawna says. "There were carriages with everything from draft horses to minis pulling them… and Arabian warriors galloping in huge groups next to the dressage warm up ring. Just getting to the warm up area was a challenge! Come On III thought it was great and loved everyone watching him."


"Come On III did very well for me at Munich – he looked great and I was pleased."


After Munich, Shawna and her horses headed to Milan, Italy, to visit with her great friend, the Irish Olympic rider Anna Merveldt.


Two weeks later, the gang was back in Germany preparing for their final show, the CDI 4* Fritzens in Austria (June 24 – 26).


The site of the show in Fritzens is a farm owned by Manfred Swarovski, called Schindlhof, and it is nestled in the Austrian Alps. Competitors and spectators alike take in stunning mountain views from every angle of the dressage arena.


Unfortunately, Shawna was very ill with what might have been food poisoning during the show, but rode nonetheless.


Rigo, whom Shawna calls her "little sausage" because at his most puffed-up he is 16.1, had a chance to compete and he placed on both days. Come On III made it into the top 15 for the Freestyle.


Shawna and "the boys" returned to Aiken on July 15. Now that she's back, Shawna says that some of her best memories of Europe include seeing the camaraderie of the riders, trainers and grooms.


"The dressage world is really like one big family in Germany. People talk, laugh, party together, and care about each other… of course it's all about the competition when they get in the ring. It was very refreshing to see people not being so cut-throat."


"The level of riding was so high and I was honored to have made it into every second round with Come On III," she continues. "People know who I am now, and it was important for me to be there and compete at those shows and at those levels. I can’t thank Carol Lavell enough for the grant money, but also my Aiken friends such as Charlie Herrick for the feed and Cary and Lisa Wallace from Custom Saddlery for their support with saddles and so much more. And of course my mom!"


The European trip cost Shawna a total of $85,000, so even with the $25,000 Carol Lavell Advanced Dressage Prize, money from the USEF and travel money from the World Cup, there was still a lot she had to make up herself.


"I was definitely on a shoestring budget – staying with friends every chance I got and so on," Shawna says. "But if you want to compete at the highest level – and you have the horses to do it – then that's what you have to do. No matter what."


Shawna, Come On III and Rigo will soon be traveling to Gladstone, New Jersey, competing in the USEF Selection Trials for the 2011 Pan American Games.