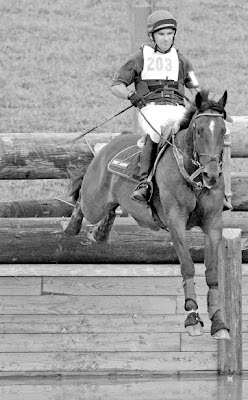 Just over a year ago, Captain Mark Phillips announced that he would be retiring from his position as chef d'équipe of the United States eventing team at the end of 2012. Captain Phillips has held that title since 1993. Under his tenure, U.S. riders have won 23 team and individual medals in international competition. These medals include one Olympic team silver (1996, Atlanta) two team bronzes (2000, Sydney and 2004, Athens) as well as one individual gold (David O'Connor on Custom Made, Sydney), two individual silvers (Kim Severson on Winsome Adante, Athens; Gina Miles on McKinley, 2008, Hong Kong) and one individual bronze (Kerri Millikin on Out and About, Atlanta.) The U.S. team also won the gold at the Pan American games three times (1999, 2003 and 2007) and at the World Equestrian Games once (2002, Jerez, Spain.)
Before turning to coaching, Captain Phillips's riding career included team gold and silver medals while competing for his native Britain (Munich, 1972 and Seoul 1988 respectively) as well as four wins at Badminton and one at Burghley. He has also made his mark on course design, creating the course at Burghley for 13 years, as well as courses for the Luhmuhlen CCI **** in Germany, the Fork in North Carolina, and Red Hills in Tallahassee, Florida, among others.

The United States Equestrian Federation appointed a search committee to find a successor to Mr. Phillips and posted a job description and application on their website this past August. The job description includes its goals (primarily winning international competitions) as well as desirable qualities in the applicant (successful international experience and stature, "the will to win", etc.) The job title on the application is "Eventing Chef d'Equipe/Technical Advisor." Applications opened on August 15 and closed on January 31.

Although the application process is private, it has become known that at least six highly qualified professionals have submitted applications, four as individuals and one as a two-person team. There may be others. Perhaps the most distinguished of the applicants that has gone public is Jimmy Wofford, who is a past president of the American Horse Shows Association, a two-time Olympic silver medalist, a two-time winner of the Rolex Kentucky CCI**** and a member of the United States Eventing Association hall of fame. Jimmy, who retired from competition in 1986, is from an illustrious equestrian family. His father, Colonel John Wofford, rode for the United States Olympic show jumping team in 1932 and went on to become the founder and first president of the USET. Jimmy, who is 66, has coached the Canadian eventing team and been named the United States Olympic Committee Developmental Coach of the Year twice. He is considered a godfather of sorts to American eventing and is revered for his horsemanship and coaching ability. He is also the author of several influential books about the sport.

One of Jimmy Wofford’s most successful protégés, David O’Connor, 49, is another applicant for the job. David, who is the current president of the USEF, has won three Olympic medals, including the individual gold and the team silver and bronze. He has also won the Rolex Kentucky CCI three times (twice when it was a three star and once when it was a four star), the Fair Hill International CCI*** five times and the Badminton CCI****. In 2000, he was number one in the world in the Fédération Equestre Internationale rankings. Since retiring from international competition in 2005, David has made a name for himself as a course designer and a coach. His is currently serving as the coach of the Canadian eventing team, which won the silver medal at the 2010 World Equestrian Games in Kentucky. If he were to get the job with the U.S. team, he would retire from coaching the Canadians after the 2012 Olympics. David's wife, Karen O'Connor, is still competing internationally and making regular and successful appearances on America's teams. There is no official word on what direction her career might take should her husband become chef d'équipe of the U.S. team.

Leslie Law, who won the individual gold and team silver competing for the British in the 2004 Olympics, also submitted an application. In addition to his two medals in Athens, he won team silver in Sydney and team bronze at the 2002 World Equestrian Games. Leslie is married, somewhat confusingly for the reader, to the Canadian eventer Lesley Grant Law, who has competed up to the four star level and has occasionally been shortlisted for the Canadian team. Since 2006, the couple have had homes in Bluemont, Virginia and Ocala, Fla. Leslie, who will turn 41 in March, is the youngest of the acknowledged applicants for the position.

The international eventer Andrew Hoy has also submitted an application. This application was initially rumored to be a joint application with his wife, Bettina Hoy, but Andrew later confirmed that he applied alone, although, if chosen, he would make use of his wife’s expertise. Andrew, 51, is an Australian who was a fixture on the Australian eventing team from 1984 to 2004. He is a winner of three consecutive Olympic team gold medals (1992, Barcelona; 1996, Atlanta; and 2000, Sydney) and an individual silver (Sydney.) He has also won Badminton, Burghley and Luhmuhlen. Bettina, 48, is a German national who was a member of the bronze-medal-winning German team at the Los Angeles Olympics in 1984. She was also awarded both team and individual gold medals at the 2004 Olympics in Athens, but had those medals withdrawn amid much controversy after technical issues having to do with the timing of her stadium round. Bettina is known as an exceptional dressage rider: in 2009, she received a score of 28.2 in the dressage phase of the Rolex, Kentucky CCI****, the best score ever recorded at that event. Bettina, who was in Aiken this January to give a clinic at Full Gallop Farm, is much sought after as a dressage coach among American upper level riders.

Bettina and Andrew Hoy are based in Great Britain at the Farley Estate, an equestrian community in Berkshire and are the only applicants who currently reside overseas. The chef d'équipe job description states that "domicile in the US" is "preferred but not mandatory." If they were to be selected, perhaps they would move their operations to the US. (Aiken would be a great location.)

Aiken already has a representative in the applicant pool in Phillip Dutton, 47, who maintains his winter training base at Bridle Creek Equestrian on Colbert Bridge Road. Phillip was born in Australia and won two team Olympic gold medals competing for his native country (2000 and 2004.) In 2006, he become an American citizen and changed his competitive nationality. His list of accomplishments riding for the U.S. include team gold and individual silver at the 2007 Pan Am Games in Rio de Janeiro, wins at the Rolex Kentucky CCI****, and numerous three star competitions. He has also been the USEA rider of the year for 12 of the last 13 years. In 2005, he was first in the FEI world rankings.

Phillip Dutton is applying for the job in partnership with Robert Costello, 45, who was a member of the gold-medal-winning American team at the 2003 Pan American Games. The plan is for Phillip to act as the technical advisor and for Bobby to be the chef d'équipe. The pair have prepared a proposal that they have submitted to the search committee, detailing how their partnership can help the U.S. be more competitive internationally. Phillip has also issued a statement that, if he gets the job, he will retire from competition after the 2012 Olympics in London.

The USEF eventing search committee will be evaluating the applications and interviewing the candidates this winter. They will come up with a short list that they will give to the eventing eligible athletes committee. This committee will interview the candidates and make its recommendations to the eventing high performance committee, the high performance working group and the executive committee. The decision on who will get the job is expected to be announced sometime in the spring, although there is no exact date set. After the candidate is selected, he, she or they will "shadow" Captain Mark Phillips through the 2011 Pan American Games in Mexico and the 2012 Olympic Games in London, perhaps acting as a Developing Rider coach. Captain Mark Phillips will officially retire on December 31, 2012, so the new chef will start the job on January 1, 2013.

Ever since word got out that Captain Phillips would not be renewing his four-year contract with the USEF, speculation on who will succeed him has been rampant in the eventing community. Each of the applicants that has become public brings something different to the table, and each has good reasons to be chosen. Although there are also reasons to appoint a younger person with more recent international experience, the popular choice so far seems to be Jimmy Wofford, who, as he says on his blog, has trained a disproportionate number of riders who have competed for the USET over the last 35 years. In fact, every American Olympic, WEG and Pan American team since 1978 has featured at least one of his students. Jimmy Wofford is an elder statesman of the eventing world, the only one of the publicly acknowledged candidates for the job that every other candidate would have to agree is an excellent choice.

For Aikenites, it might be a good thing if Phillip Dutton were the new coach, because it would give this area some added prominence in the eventing universe. Of course, it would also mean that Phillip would no longer be riding for the U.S. team, a decided drawback since he is one of our top riders. David O’Connor, is, after Jimmy Wofford, the best known of the candidates, due mostly to his role as president of the USEF. He brings international riding, training and extensive administrative experience to the job. Leslie Law has an excellent reputation as a coach. Bettina and Andrew Hoy would bring undeniable international skill to the table, along with a European perspective that may help America on its medal hunt, especially given the importance of the dressage score in eventing success.

Coaching, of course, is only one part of the chef ’s job. The application asks for an "eventing program proposal," and it is likely that this document will play a major part in the selection process. Although the US team has won international medals during Captain Mark Phillips's tenure, he has always been somewhat of a controversial figure, and there are many in the eventing community who feel they would like to see changes, and even that the program has gone astray and needs to be put on a different path. These sentiments have tended to be particularly strong after the team has a poor international showing: the failure of the eventing team to win any medals at last year’s WEG, the first time that the competition had been held on American soil, is seen by some people as a sign that the team needs a new direction. The successful candidate for the job needs to be more than a coach and a rider. He, she, or they will need a clear vision of where the program needs to go, a plan to get it there, and the determination and dedication make it all happen.