His real name may be Pierre Bellocq, but he is known throughout the racing world simply as Peb. His cartoons and caricatures have delighted readers of the Daily Racing Form for decades. On March 3-27, the Aiken Thoroughbred Racing Hall of Fame and Museum will hold a major exhibition of Peb’s work.


"Thinking that I will have the opportunity to show my work in Aiken thrills me no end," says Peb. "Aiken to me is very much like the birthplace of my father, a small town in the foothills of the Pyrenees in the Pau region of France. Every winter there would be a glorious steeplechase meeting, which would attract horses from all over Europe. Horses would be trained in the countryside – such a tranquil setting – much like Aiken. My father Hilaire learned to train from his father in such a setting. I have great memories of that place and it has long been an inspiration for my work. I look forward to visiting Aiken in March for the exhibit – it makes me proud and thankful also to be asked to share my work in such a way." 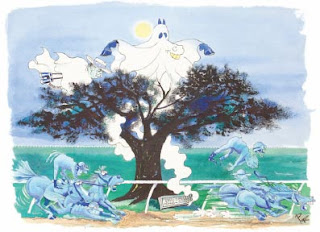 Whether it's a cartoon featuring the racehorse Zenyatta as the goddess Athena (titled Z-Athenya), Secretariat lounging as a playboy on a bed covered with the blue and white checkered colors of Meadow Stable, or the intricate Canvas of Stars mural at Gallagher's Steak House in New York City, Peb's art delights both the eye and the mind.
Born in 1926, Peb's early world revolved around horses, but at 8he knew he would be an artist. He was raised in Maisons-Laffitte, a community in the suburbs of Paris, where his father worked first as a jockey and then as an assistant trainer. It seemed natural to Peb to combine his two passions, drawing and horses. World War II came. When Paris fell to the Nazis in 1940, the Bellocq family fled to the south of France. Returning home months later, they were relieved to find their home untouched.
In 1946 after the liberation of Paris and the end of the war, Peb began drawing for France Libre and then Paris-Turf, which became the largest racing newspaper in France and one of the largest in Europe. The young artist caught the eye of John Schapiro, president of Laurel Race Course in Maryland. Schapiro was in the process of launching his brainchild, the Washington, D.C. International takes, and he was looking for an artist to do his logos and posters.

"I met Schapiro at Longchamps in 1951," recalls Peb. "I was 25 and could barely speak English. I had done a poster for the race and he loved it and he asked me to come to America."
With a wife and two young children, as well as a blossoming career doing racing sketches for Paris-Turf and political sketches for the literary newspaper L’Aurore, Peb declined the offer. However, a few years later, Schapiro invited him to attend the 1954 International, which had become a huge success. He flew to the United States on the plane that carried the French and Belgian horses that were running in the race, and he never returned to France.
After a short-term job with an advertising agency, Peb was hired by Sam Perlman, publisher of the Morning Telegraph and the Daily Racing Form, to do one sketch a week. He also got a gig at the Philadelphia Inquirer doing political sketches. With his livelihood secured, Peb was able to bring his wife and children to New York.
For more than 50 years, Peb chronicled the American racing scene in the Daily Racing Form. Think of a racehorse and he’s probably drawn it. The 2010 Horse of the Year, Zenyatta has been a particular favorite, as was the great Secretariat. Owners, trainers and jockeys have been captured by his pen with a mixture of artistry and wit. Aiken’s own Cot Campbell has been a frequent subject, portrayed with a jutting chin and his signature cap. Campbell is one of 73 individuals portrayed in the popular "Canvas of Stars" mural at Gallagher’s, which was commissioned by the owner, Marlene Brody and unveiled at a starstudded party in November, 2007.
It took Peb over a year to create the mural, which is 26 feet long. He used celebrities from every decade since the 1920s who had been loyal customers at Gallagher's, including John F. Kennedy, Babe Ruth, Paul Newman, LeRoy Neiman, and Muhammad Ali.

"I sketched all kinds of people when I first moved to this country," says Peb. "Musicians, political figures, actors, boxers... you name it!"
"That comes in handy when I do murals because I have such a collection of sketches at this point in my life."
Peb has also done murals at Churchill Downs, Aqueduct, Del Mar, Oaklawn, the Meadowlands, and Roosevelt Raceway.
In 2001, when Churchill Downs began its major renovations, one of the additions to the clubhouse was a 36-foot mural depicting all 96 jockeys who had won the Kentucky Derby from 1875 to 2004. Peb has added to it every year.
But it's not just racing that interests Peb. He has recently become enamored with the sport of competitive driving and has done several commissions within that discipline. He has done hundreds of harness racing pieces, as well as straight equine humor.
Monica Driver, web developer for www. PEBsite.com and a winter resident of Aiken explains that the museum’s exhibition space "will be filled with original paintings, working sketches and signed prints. We will present examples of all sorts of equine activity in Peb’s inimitable and humorous style. The race track and Zenyatta will be represented, of course, but we will also feature harness racing, steeplechasing and carriage driving. There will also be working sketches from several of the recent murals." 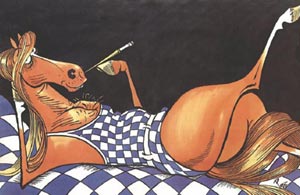 Peb also painted a truly Aiken scene for the exhibit. He was asked to create a picture of Blue Peter, the champion 2-year-old colt of 1948 and a member of the Aiken Thoroughbred Hall of Fame. Blue Peter is buried in the infield of the Aiken Training Track, beneath the beautiful live oak tree there, which is known as Blue Peter’s tree. Instead of simply sketching the horse, Peb used his sense of humor and his imagination to conjure up an image of the ghost of Blue Peter rising up from his grave and hovering over the training track, frightening the youngsters who are being sent out for their morning gallop. The painting will be raffled off the night of the exhibit's opening. Raffle tickets are $50 and proceeds will support programs and exhibitions at the Hall of Fame. The painting can be seen at the museum, with tickets available from now until March 3.
"I have admired Peb's work for many years and to have this internationally known artist come to Aiken to do a show for our Hall of Fame is fantastic," says Lisa Hall, the museum's supervisor. "Through his art he has brought racing alive and this exhibition is going to be one that every horse lover and racing fan will want to attend."
The Aiken exhibit will be the first public showing of Peb’s work since 2004, when the Daily Racing Form and the National Museum of Racing put together an exhibit entitled "Peb: The Art of Humor," that ran for 18 months. 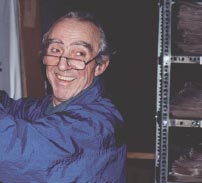 In honor of his body of work, Peb won an Eclipse Award in 1980 for Outstanding Contributions to Racing. In 1983 the French government awarded him the Chevalier des Arts et des Lettres, the highest honor bestowed on artists in that country. He received the National Cartoonists Society 1991 Sports Cartoon Award and their 1999 Newspaper Illustration Award.
Peb's exhibit runs from March 3 – 27, with the Opening Reception March 3 from 5 – 7 p.m. The Aiken Thoroughbred Racing Hall of Fame and Museum is located at 135 Dupree Place, inside Hopelands Gardens.